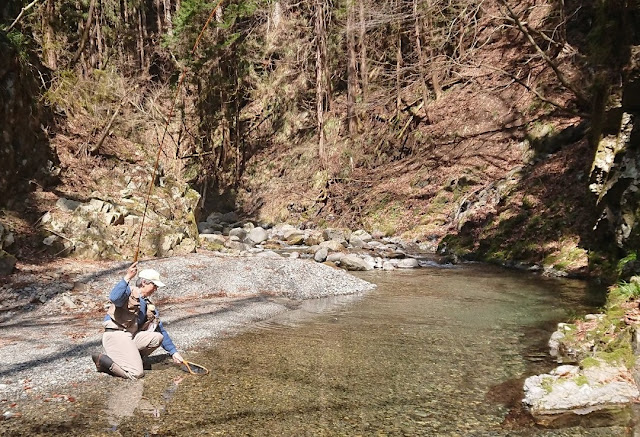 One day in March, I received a FB message from Sebata-san. There was a link, so when I clicked on it, it seemed that a dedicated section for tenkara fishing was opened in Kuro-kawa, which flows through the village of Okorogawa in Mae-Nikko. Kuro-kawa is the mountain stream where young Sebata-san first met tenkara fishing many years ago.

Then one Saturday in April, about a month later. I was driving west on the highway in the early morning toward the Okorogawa. Okorogawa is a mountain village located in the Mae-Nikko Mountains, which lies on the south of Nikko, which is registered as a World Heritage Site, and also about 20 km west of Utsunomiya, the prefectural capital of Tochigi Prefecture. From Mito where I live, I can reach Okorogawa in about 2 hours using the highway.
Around 7:00 am, after passing the last big town Kanuma, the scenery became a rural landscape. Eventually, the road ran along the Kuro-kawa and gradually entered the mountains.

When I entered the village of Okorogawa, I saw the brave figure of Mt.Nikko-Nantai beyond the gorge in the direction of travel. Okorogawa was a beautiful village that retains the atmosphere of a Japanese mountain village in the good old days. I had heard from Sebata-san many times about Okorogawa and the stories of learning Tenkara fishing there. "OK, this is the scenery of Koraigawa.” I wondered in my mind. 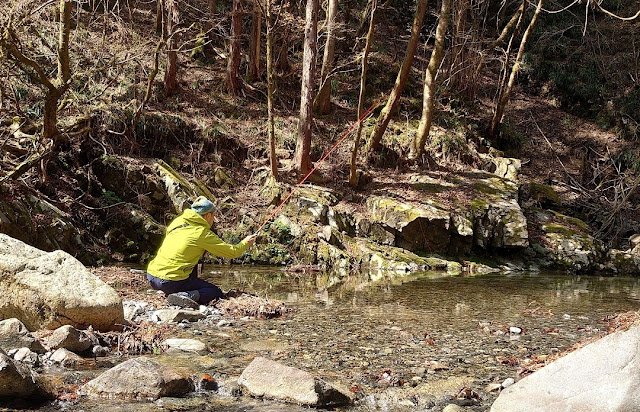 However, he never showed Sebata-san how to fish, and Sebata-san later thought that Tanaka-san probably wanted Sebata-san to learn tenkara fishing from yamame(It means to do fishing and study by myself). In addition, Tanaka-san always said, "Tenkara is an interesting fishing. If you catch 5 or 6 fish, you can't stop it anymore." “Tenkara is easy fishing. Just cast and pick up the rod then you can hook fish.”

However, when Sebata-san actually tried it, tenkara fishing was not so easy. Sebata-san says that the word "Quick setting hook for yamame" was stuck in his head, and it made tenkara fishing difficult. In the end, it was said that one season was over without the feeling that he was convinced that he had fished yamame. One day in the second season of Tenkara fishing, one cast did not go well, and the tippet and the line stayed slack and fell on the water surface. Sebata-san thought “Ah, this is useless”. Then yamame appeared and bit the kebari. he could not set the hook because the line was slacked. Anyway Sebata-san thought yamame had already escaped, but when he pulled the line that Yamame was still biting the kebari, and Sebata-san could catch the yamame. Sebata-san thought this was it. "If there is slack in the line or tippet, yamame does not spit out the kebari immediately. Then setting hook is easy even if it is a bit slow." It was the moment Sebata-san opened his eyes to tenkara fishing. Decades have passed since then, and Sebata-san has become one of Japan's leading tenkara fishermen. Kuro-kawa, the river of Sebata-san’s memories, flows through there in Okorogawa village.

Kuro-kawa gradually took on the appearance of a mountain stream from Satokawa(village stream), and I arrived at the Tenkara-only section. I met a friend, Kubota-san, in the car parking next to the house of the fishing ticket office. We were served cups of tea by the old man at the fishing ticket office, and we chatted about Sebata-san for a while, and he kindly told about recommended fishing points. 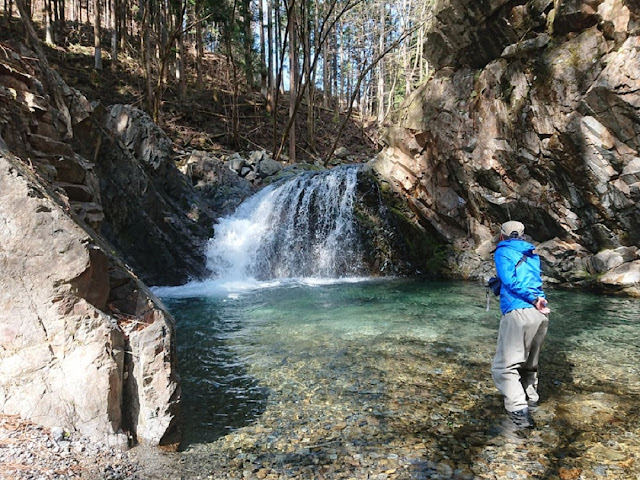 We entered the point of Otaki (Big water fall), the most upstream part of the dedicated section. Kuro-kawa was a mountain stream with paved roads along the river, but the flowing water was wonderfully clear and clean. This day was a sunny day like early summer, and the temperature rose steadily as the sun rose. When we went down to the stream, many mayflis were already hatching and dancing on the stream. It was the best day for kebari fishing. I connected my traditiona Japanese bamboo tenkara rod, and we started fishing immediately. However, although we could see some yamame were staying in the water, they were not active, and we took turns fishing for a while, but I only caught one small yamame. While fishing the pool of Otaki, Ishimori-san and Hirasawa-san arrived by a car at the parking lot above the waterfall. We finished fishing and went up from the river once and talked for a while.

After talking somewhile, Ishimori-san wanted to do fishing, he started fishing a little downstream and immediately caught a good yamame over 25cm. Then, we move downstream altogerther, there was a good flow with some nice points that were looking better than upstream. As soon as Ishimori-san and I started fishing, Ishimori-san caught another 25cm over yamame again. Although it was discharged fish, it was beautiful yamame. I got motivation looking at that yamame, and I took turn of fishing in the good current, good-sized yamame was a hit in the flow immediately. He bent my bamboo rod and fought well. It was healthy 24cm yamame. Overall, it seemed that a fair number of yamame have been released in the tenkara-only section. The size of some yamame were also quite good. 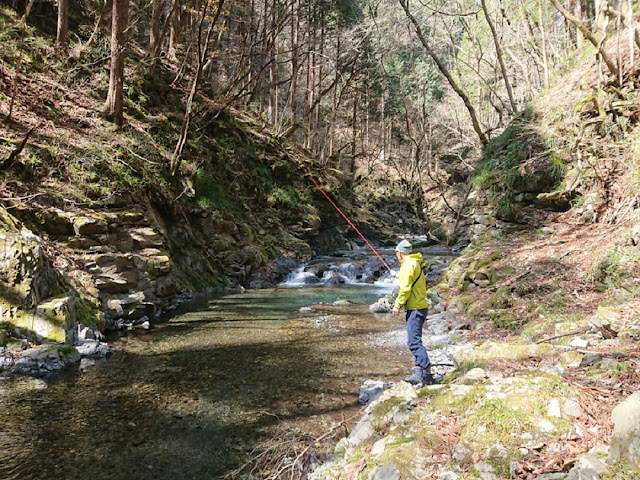 When I fished the good-sized yamame, I received an incoming call on my cell phone. It seemed that radio waves came in the stream because it was close to the village. When I answered the phone, it was from Takahisa-san, the eldest son of Sebata-san. Takahisa-san probably heard from Sebata-san that we would go to Okorogawa on that day. He said that he would come to Okorogawa in an hour because he had just some errands to do. It had been a few years since I met Takahisa-san last time.

About an hour later, when we just got up from the stream and were taking a break, Takahisa-san arrived. Since it was the first time for the other three people to meet Takahisa-san, I introduced them, and we talked about latest situations for a while. It was a good time, so we had lunch at a soba restaurant nearby. The weather was nice, so we took seats on the terrace. It seemed that there was a small campsite just below, and a good number of people are setting up tents on a sunny Saturday. I thought they might be anglers who were also camping. The topic of the talk went about Sebata-san. Takahisa-san said that Sebata-san’s legs became weak, and he could no longer walk in the genryu. Still, a few weeks ago, Sebata-san visited Okorogawa and stood by the stream, and he was happy to meet old friends living in Okorogawa. The soba sets had been served. The soba made with local buckwheat flour were accompanied by the local wild vegetable tempura, pickles, and rice, which was very delicious.
b
Takahisa-san said he would retire from his work in June. He had been very busy with work and away from genryu fishing for a long time, so he said he would like to start genryu fishing again after his retirement. So, we promised to go genryu fishing together in this summer and we said good-bye.

When I was driving home on the road along the Kuro-kawa after leaving the village of Okorogawa, I remembered that Sebata-san saying "In the old days, I could see a bunch of good yamame swimming in every single pool in Kuro-kawa." Sebata-san was smiling with longing eyes. 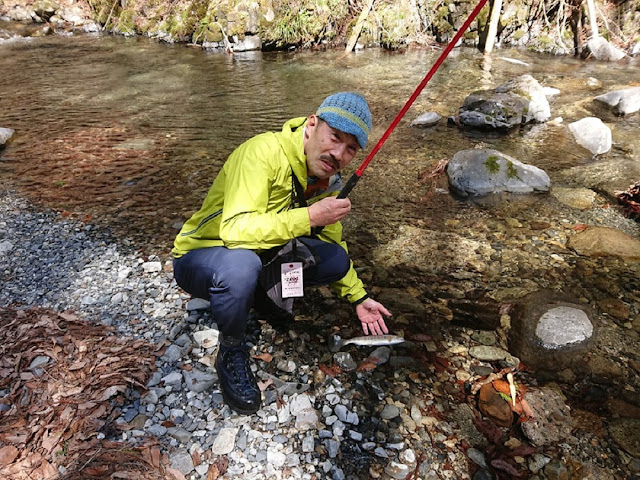