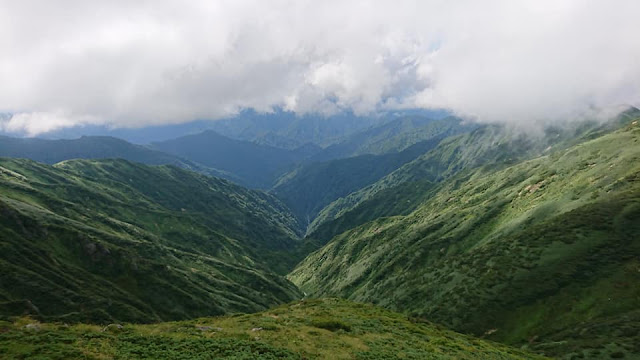 Genryu Fishing from the Mountain Lodge

Takakuwa-san said that he would be working as a Koyaban (manager of the mountain hut) of a mountain hut in Iide mountains for two weeks in mid-August, so I decided to go see him.

Mt. Iide is the main mountain of the Iide mountain range located on the border of the three prefectures of Fukushima, Yamagata, and Niigata in the Tohoku region at an altitude of 2105m. In the olden days, Mt. Iide was a mountain of Shugendo (Japanese mountain asceticism-shamanism incorporating Shinto and Buddhist concepts), and once it was a mountain of worship that only the shugenja (mountaineering ascetics) were allowed to climb. Today, it is a popular mountain for general mountaineering, but it takes about 10 hours from any of the trailhead at north, south, east, and west to the summit, and mountain huts are built on each mountaineering route. 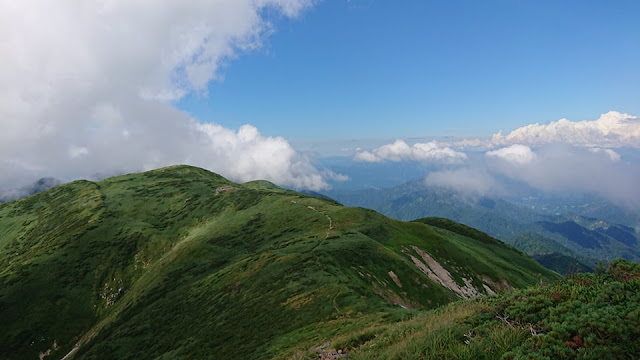 Takakuwa-san said he worked as a koyaban of Monnai Hut on the north side of Mt. Iide for 2 weeks every year, but due to various circumstances, he said he would be doing a koyaban at the Tamogi Hut, which is located further north, this year. I said that I would like to go fishing for one day in a nearby genryu because I am going to the mountains. Then Takakuwa-san suggested me to stay at the hut for two nights and descend the north side of the hut and fish there in the head of Oishi-gawa (river) Higashi -Mata-zawa (stream) for one day. I once fished in the genryu of Oishik-gawa Higashi-Mata-zawa, and I thought that the fish stop was far downstream, but the people of the genryu fishing group long ago released iwana to the far upstream. The descendants are still living there.

Then, I decided to visit Takakuwa-san on such a schedule. As soon as I called out to my genryu fishing friends, two friends said they wanted to join. 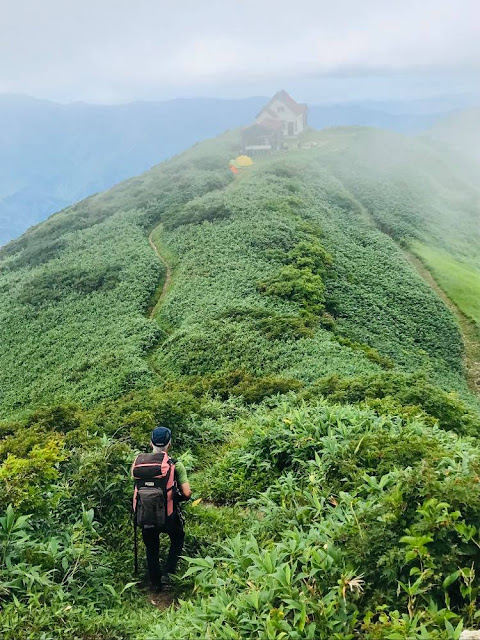 About an hour after climbing the steep mountain trail, it was around 7:30 the midsummer sun was rising from the eastern mountain ranges and shined mercilessly. Climbing the trail carrying a backpack on my back which weighted about 15kg was harder than expected. I regret having brought heavy ingredients for the evening banquet. Sweat did not stop. I climbed while taking a short break in the shade of trees many times, so I could not earn good distance. The ridgeline we were aiming for was still far higher and farther. I let two friends go ahead. They are younger than me and do mountaineering often, so the pace of climbing was totally different. The peak of the ridgeline we were heading to was about 1800m, and the altitude of the trailhead was 406m, so it was about 1400m we had to climb. From the peak, trail goes down the ridgeline and the Tamogi hut is located at 1623m.

I had never climbed a 1400m carrying a 15 kg backpack on my back, and it was really hard to climb under the strong sunshine in the summer. I thought I could arrive at the hut before 13:30 and had a cold beer, but it was over-optimistic.

After 12 o'clock, I passed through the forest belt and had lunch, but the ridgeline was still ahead. Nevertheless the view was getting nicer and the green mountains of Tohoku were really beautiful. At 13:30, I finally arrived at the peak three-way junction. After a short break, I walked north on the mountain trail, which was finally downhill. There were clouds at the altitude of the ridge, but when the clouds were occasionally blown by the wind, the view opened, and I could see the mountains with green meadows and some towns in the distance. After walking for about 20 minutes, I could see the red roof of the Tamogi hut between the clouds.

On the way, I once took wrong route but managed to arrive at the Tamogi hut after 15:00.

Two friends and Takakuwa-san welcomed me with smiles. Takakuwa-san treated me with cold canned beer. I was very thirsty and drank it all at once, and I got drunk immediately. May be I was too tired.
Tamogi hut is a mountain hut that can accommodate about 20 people and is built on a ridge extending to the west from the mountain range that extends north from Mt. Iide. There is also a space where they can set up about 10 tents. Near the top of the mountains overlooking from the hut were covered with pleasant green meadows, and when we looked west, we could see the Sea of Japan shining in the setting sun and the big city Niigata, in distance. In the evening, we started a party with Takakuwa-san, another hut manager, and regular customers from an early time. Eventually the sunset and the night came. The night view of Niigata was beautiful in the darkness. 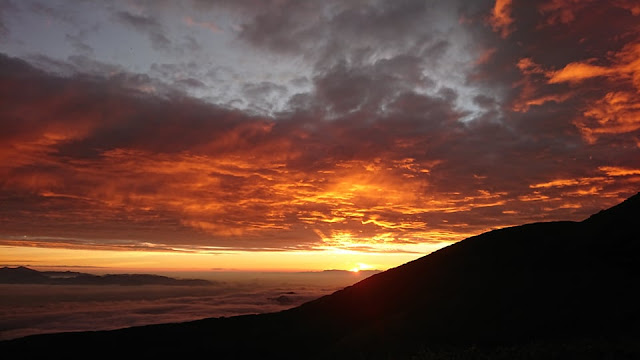 The next morning, at very early morning, I woke up as hearing people talking outside. When I went outside, there was a splendid sea of clouds in front of the hut, and the sun was rising from the other side of the sea of clouds, and the eastern sky was dyed in red by the sunrise. Oh, I thought this was a privilege for those who do the mountaineering. Anyway, it was a bit too early for us. We slept little more again and had breakfast slowly. The weather was clear too. It seemed that some guests had already left the hut. 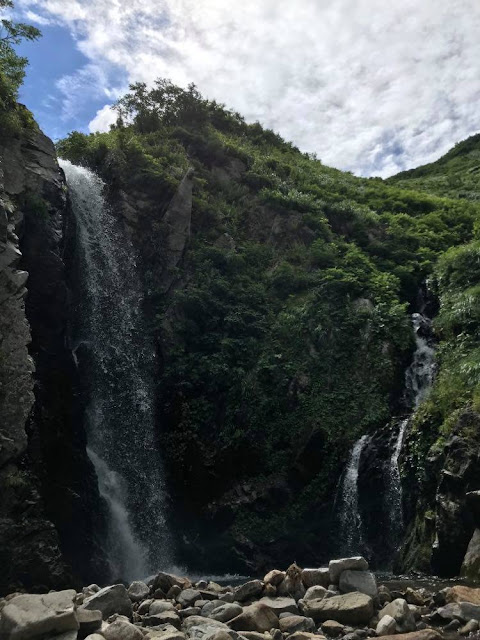 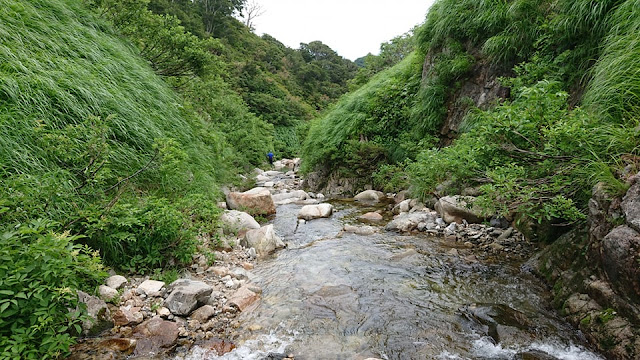 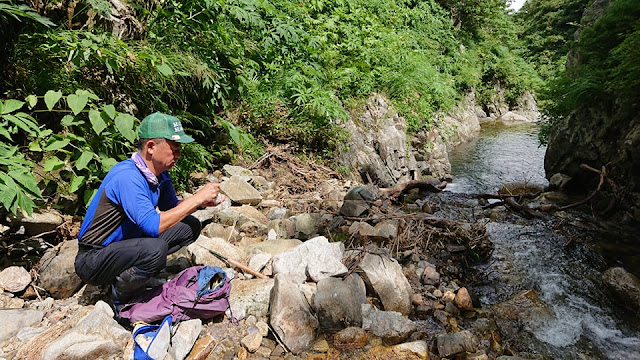 We left the hut at about 8:30 and went west on the mountain trail on the ridgeline for an hour as taught by Takakuwa-san. About an hour walking, there was a huge grassland on the eastern slope of the ridgeline. Right under there looked valley of the Oishik-gawa Higashi-Mata-zawa. We went down the grassland. Following the trace of a small stream that appeared soon. We came out to a bigger stream in about 100m. The mainstream is where this stream goes into. However, according to Takakuwa-san's guidance, this stream eventually became a series of waterfalls that we could not go down. Soon waterfalls appeared and we escaped to the ridge on the right bank. The descent from there was a series of heavy bushes, but it finally came out to the headwaters of Higashimata-zawa in about an hour. It was past 11 o'clock. 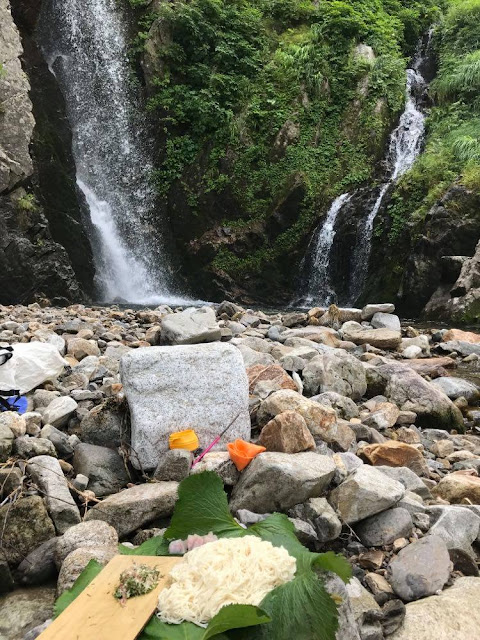 Even though it was the mainstream, it was a considerable headwater, and the width of the stream was only about 2m. Still, the amount of water looked enough, and when a friend of mine started fishing, he immediately fished about 25cm of iwana. From there, we fished one by one, and from every good point, good-sized iwana chased our kebari. At 12:30, we went out to Otaki(Big waterfall) and we laid down the rods and had lunch.

The weather was still fine. I felt like taking a nap after bathing in the negative ions of the waterfall. A friend kept 3 iwana as a souvenir for Takakuwa-san. To be honest, I wanted to release all the precious iwana to the stream.

The distance to the confluence with tributaries where we started fishing was only about 200m. “A paradise for anglers of only 200m.” I just remembered somebody was saying such a thing. "No, we do not need paradise for anglers. What even fur more important is the paradise for iwana." I was thinking in my heart. "May the genryu of the mountains all over Japan be the paradise of iwana?" “Can we protect such a future?”