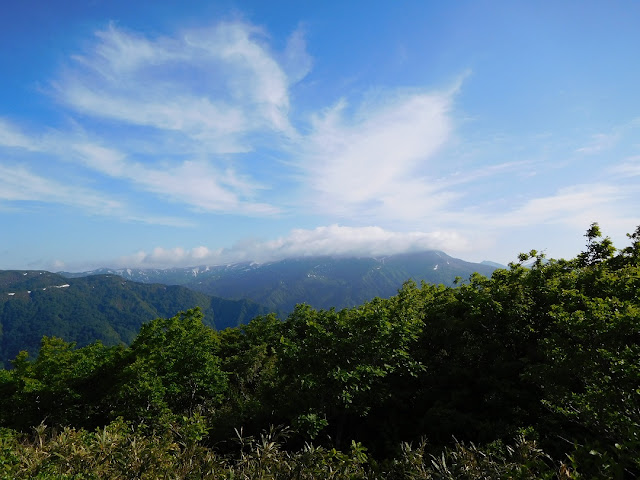 In January 2020, the first person infected with covid19 in Tokyo came out. The number of infected people increased to about 30 in a month, and although the number of covid19 was more increasing in China and Southeast Asia at that time, I thought that it would be settled by the time the climate became hot, like someone else’s problem. However, the number of infected people did not subside even after spring and gradually spread throughout the country. In April, we were requested to refrain from going out without important purposes and to refrain from traveling across prefectures. Usually, in April and May, I often go fishing in the mountain streams in the neighboring prefectures, but that year I could only go fishing in the small mountain streams in the north of our prefecture or get out to the low mountain hike in our prefecture. I then thought it was a big deal. 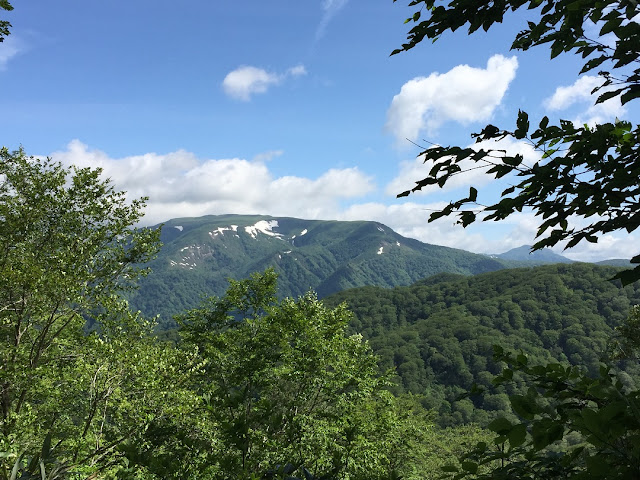 Even so, the number of infected people gradually turned to a declining trend, the restrictions on going out were lifted, and we decided to go to the first genryu fishing trip in early June like every year. I talked with my group friends and decided to avoid fishing with large number of people in one group. I went to the familiar Oide-River in Tohoku Iwate with Tsuru-chan and Mr. Matsuzawa for 2 nights and 3 days. Oide-river is the genryu that we often go in the beginning of June because we could harvest good sansai(mountain plants) besides fishing. Concerning Oide-river I have written in “#9 Genryu Fishing Trip Walking Through 1300 Year Old Trail”. 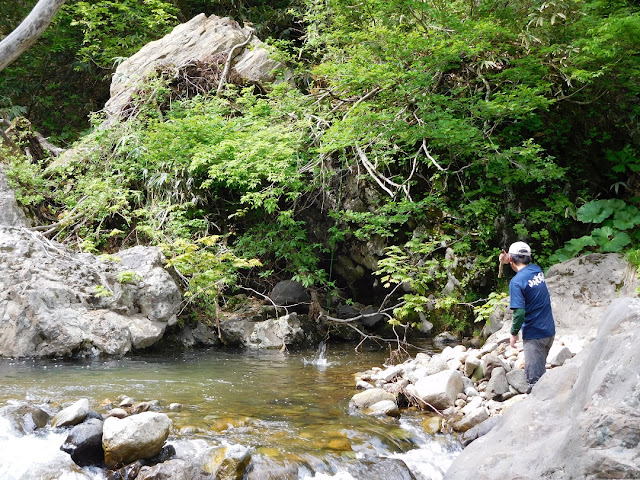 On early Friday morning, Tsuru-chan, Mr. Matsuzawa and I were climbing 1300 year old trail and picked Nemagaritake (Nemagari bamboo shoots), Taranome, udo etc. on the way to the tenba (camp site) by Oide-river. It was a deeply foggy morning, but by the time we crossed the pass and went down to the Oide-river, the clouds had become much thinner, and the sun was shining little by little. Eventually, out of nowhere, Ezoharzemi (Ezoharu Cicada) started singing one by one. “Weather will be better soon," Tsuru-chan said happily with a smile.(Ezoharuzemi only sings in good weather.) After 15 minutes, the blue sky was spreading, and the forest was surrounded by a large chorus of Ezoharzemi. There is no better time than when you come to the mountains and the weather is getting better like this. 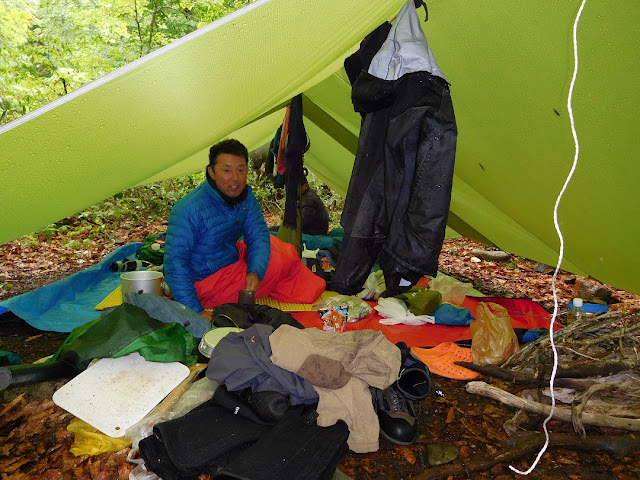 We arrived at the usual Tenba about 10:00. Immediately, we set up a tarp and prepared for early lunch. The afternoon was a wonderful day. We hiked up the main -stream and fished a little. Yes, fishing was very good. Everyone fished good size iwana. We returned to Tenba much earlier than usual. We prepared sansai (mountain plants) by the stream in front of the Tenba and started drinking while preparing dinner. At 8 pm, when we continued the drinking while fighting drowsiness, there was full of stars in the sky that promised good weather of the next day. 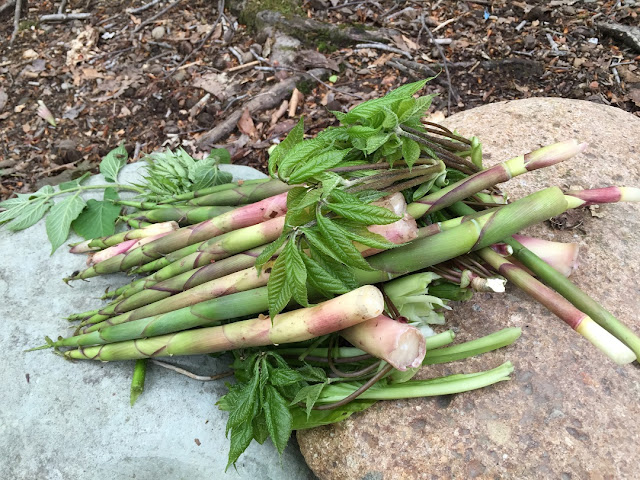 The next day we woke up after 6am. Weather was good, and we were all fine. I always think that after sleeping in a mountain listening to the sound of stream we have a pleasant awakening and wonderful morning. May be because the first day of entering the mountain, our sleep time is extremely short due to the travelling the night before, and the tiredness of climbing over the mountains may lead us to a deep sleep from an early night. But not only because of that, I think it is very good for the human body and spirit to sleep in the woods listening to the sound of the stream flowing. In fact, when I come back from the mountain, I'm really in good shape for about a week. 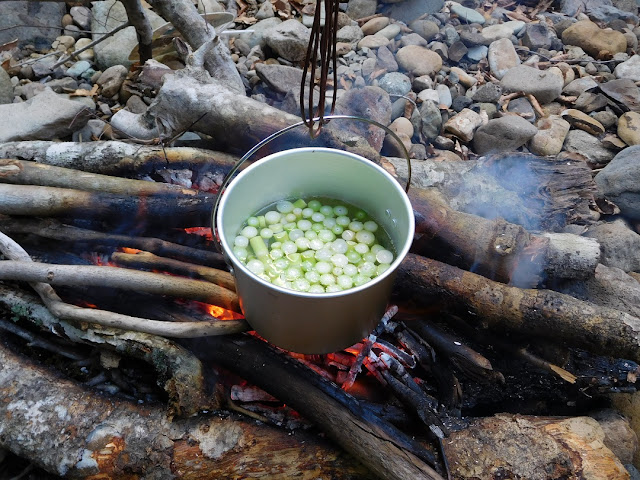 After having breakfast, we set out for the 30m Kashiwa Otaki (Big Water-fall) in Kashiwa-zawa, which flows into far upstream of the main stream. We skipped the area we fished the day before and started fishing about an hour walk from the tenba. Fishing was good on this day as well. There aren't many anglers in this river in early June, and fish are not so cautious. There was very little snow in the last winter, so the amount of water in the stream was very low, but iwana were very active and chasing flies well. The three of us took turns fishing and arrived at Kashiwa Otaki before noon. 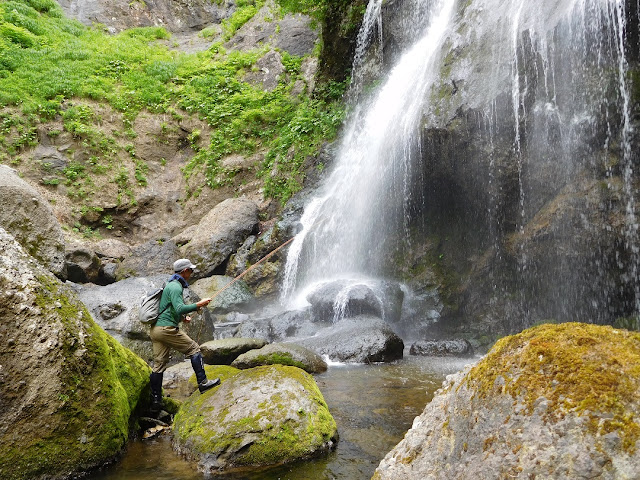 We returned to the mainstream and had lunch. We still had plenty of time, so we fished further upstream of the mainstream from noon. The fishing there was also very good. After fishing for about 1 km, Tsuru-chan suddenly shouted, "Oh, bear!" When Tsuru-chan was fishing in the waterfall basin of a waterfall of about 2 m. It seems that a bear appeared on the waterfall, which is about 7 or 8m away from us. According to Tsuru-chan, he was a young bear body length of a little over 1m, who has not grown up yet. The bear was also surprised and fled upstream. After climbing the waterfall, it was a slab gorge with steep banks. We walked a little, but after the bear ran away in a hurry, the puddles all over the places were cloudy. "I think he spoiled the stream for fishing", "I don't want to bump him again." We decided to finish fishing and return to the tenba. 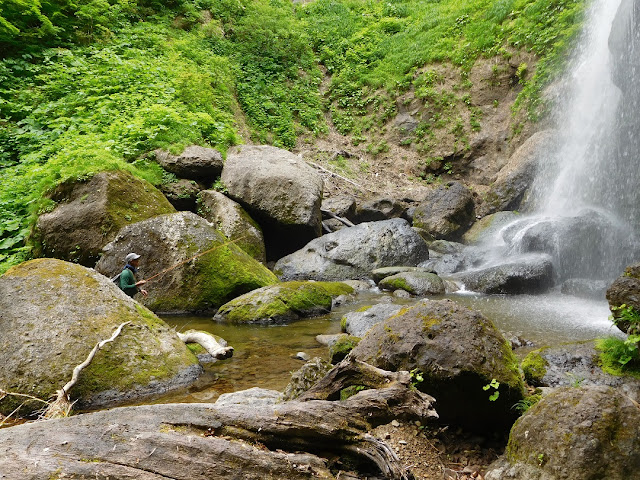 When we walked for an hour to the tenba, Mr. Matsuzawa, who was walking at the front, shouted, "Oh, there is a huge bear!" Well, bear again, when I looked downstream while thinking so, it was true that a wonderfully strong looking and big bear was walking toward us. The bear had not noticed us yet, maybe it was still 100m away. Even at that distance, he was probably a big bear whose body length was probably close to 2m. "Wow, it's a really amazing bear." I said. Tsuru-chan and Mr. Matsuzawa were taking pictures, but the bear still had not noticed us. At the distance of about 50m, I thought it was about to be dangerous distance and we shouted, "Hey, hey." The bear immediately noticed us and disappeared into the woods on the left bank of the stream. It was the usual bear behavior pattern. We though he was not a dangerous bear. We walked to the tenba with confidence. 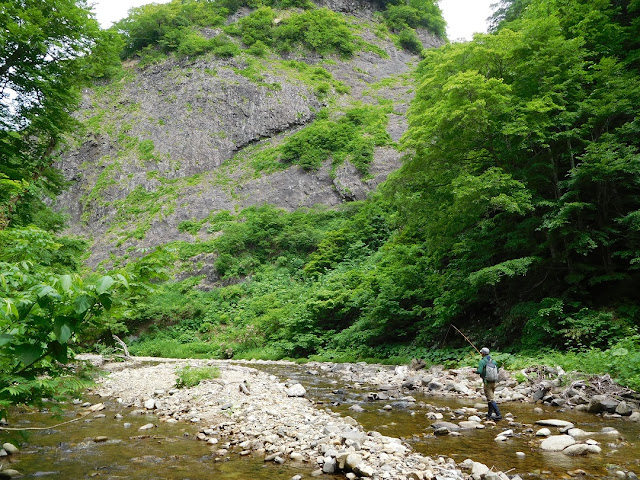 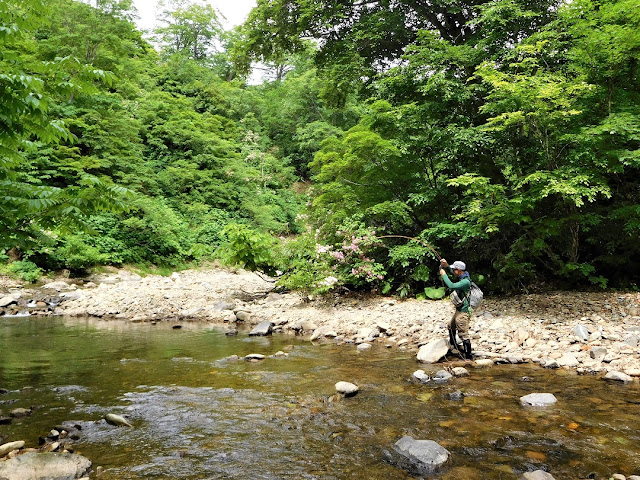 In the evening, we started a drinking around the bonfire next to the tenba from an early time. After drinking for a while, our talks got excited. Around 6 o'clock when it was finally getting dark, "I think some animal was rustling from a while ago.", "Oh yeah, I noticed that too," said Mr. Matsuzawa and Tsuru-chan. I could not hear it because it was in the direction of the bush behind me. Immediately there was a sound of animal walking in the bush. I felt it was only about 15m away. I felt it was very strange as to whether the wild animals would bonfire and walk to the place where they were speaking loudly. "Hey, hey.", "Don't come over here.", We made a loud voice, but the sound of walking through the bushes was approaching. We were upset and stood up. 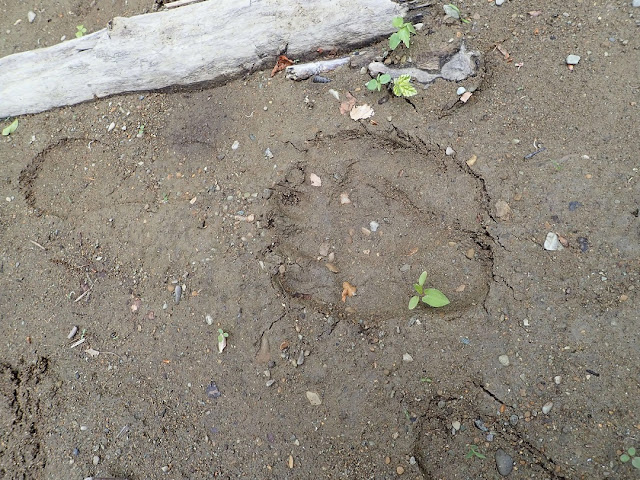 "Oh, bear!" Exclaimed Mr. Matsuzawa. A bear was walking just behind Tenba, 7.8 meters from us. "Hey, don't come!" When we shouted, the bear looked finally noticed us. When Tsuru-chan threw a firewood, the bear turned and ran upstream. "What's that? No joke.", "It may be a young bear who doesn't know about humans yet." We were relieved and continued to have dinner. However, in less than five minutes, we were horrified by the sound of pushing through the bush, bear-like sound approaching again. "No way!" Tsuru-chan threw the firewood again, and he became quiet. 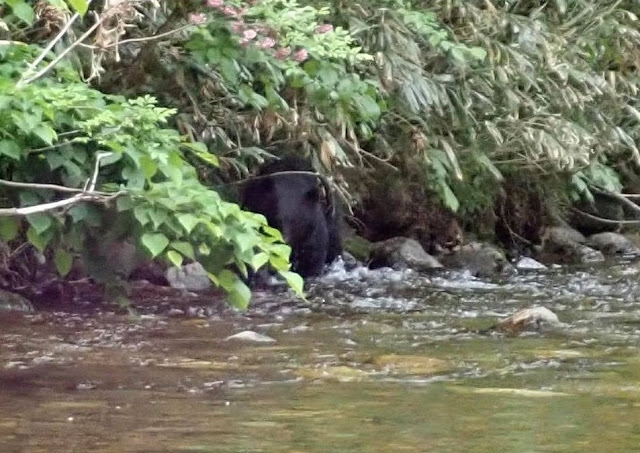 "Oh my god, a big mother bear is coming!" Mr. Matsuzawa shouted and pointed to the upper reaches of the stream. A big bear that seemed to be seen upstream in the daytime was crossing the stream about 20m upstream of the Tenba to the right bank side where we were. "Hey, hey!", "Don't come!", We screamed and ringing the pot. The mother bear immediately noticed us and disappeared into the forest on the upstream right bank. That was where the young bear just ran away. And within 5 minutes, a bear-like sound was approaching from the back downstream side of the Tenba. I felt like we were in a pinch and panicked. Tsuru-chan threw a firewood again and drove him away. However, this time it seemed that he was trying to go from downstream to upstream. May be, he was the third one. I suddenly realized. These three bears are a family. Thinking to their size of the two young bears, it was the time they would leave from the mother bear to be independent in the near future. May be, they were practicing apart from their mother during the day. Perhaps the young bears were trying to join their parent bears in the lower reaches of Tenba. One of the young bears passed behind Tenba, but the second was driven away by us and fled upstream. Another young bear, who realized that his mother and brother bears were upstream, would have been driven away by Tsuru-chan every time, trying to pass behind Tenba many times in order to join them 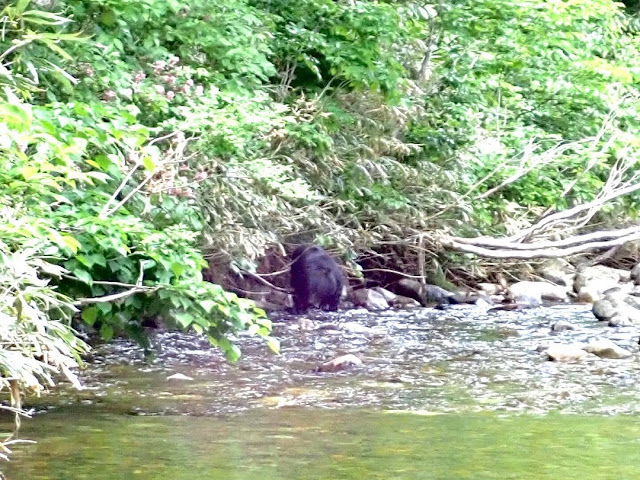 "The next time a young bear comes, let’s go down the stream side and let him through." I told Tsuru-chan and Mr. Matsuzawa also telling them what I thought. About 3 minutes later, a rustling and a young bear came from the downstream side. We immediately descended to the riverbank, and the bear seemed to have gone upstream. "It would have been too bad if I was attacked by that big parent bear.", "Aren't they attack us again, are they?" we talked, but they never came again. Around 11pm, I became quite calm and sleepy. We decided to sleep, but we put all the bonfires woods on the bonfire so that it would keep burning as long as possible. We also left the lantern on. "It's best not to sleep soundly to notice in case a bear comes." Tsuru-chan said.

I woke up once after 1am. The bonfire was still burning. The light of the lantern also illuminated the area. I did not feel any sign of a bear. Insects are crying. I heard a Tora-tsugumi (thrush) singing in the distance. It was the usual genryu night. The two, who had told me not to sleep soundly so that they could immediately notice the sign of a bear, were sleeping soundly with a sleeping bag on their heads. I fell asleep thinking that various things would happen in the mountains.

It was also sunny from the morning on the last day. After withdrawing the tenba, I was walking up the trail to the ridge carrying a backpack that became slightly lighter. Suddenly, I wondered the children bears met the mother bear safely last night. Then, I hoped that the beautiful nature of this genryu area continues to be rich and that bear family will live well in this rich forest for many years. From the bottom of my heart.