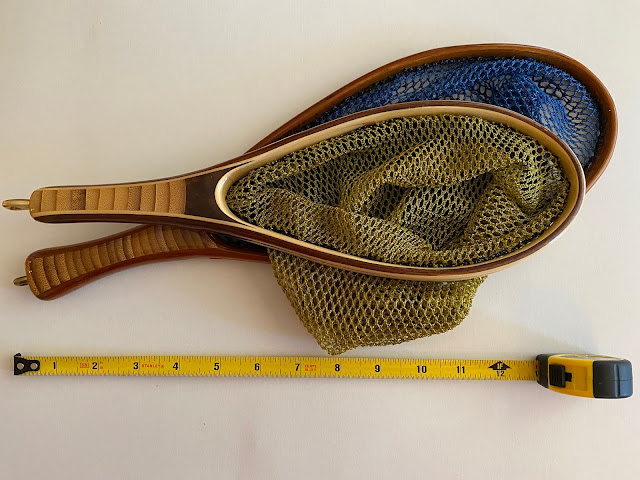 I always look to the Japanese for inspiration.

But I am not Japanese, I am an American.

I practice the simple method of Japanese style fly fishing, tenkara. I don't try to be Japanese, but I do enjoy and respect what they do and I enjoy their style of fishing. That being said, I am fishing tenkara, Japanese style, influenced from my own background of western fly fishing.

I see that the west also has influence on the east, many Japanese tenkara experts also practice western fly fishing. I think it is a good thing to do both. I don't do western fly fishing much, I quit to learn tenkara, I will do it again one day, today is not that day.

My non-tamo tenkara nets are Japanese influenced however they are made by a western craftsman with my direction.

My favorite tenkara net is Japanese yet I use western nets that are Japanese influenced.

If you want to learn Japanese tenkara, learn from the Japanese.

There are many tenkara and fly fishing enthusiasts in Japan that size their nets to the size of fish they are catching. They also have many styles of nets. For my version of the mini net, I have taken inspiration from them and have had built, small nets which I have also modified for my own use.

I enjoy a small net because they are easy to pack and carry. They also work well to capture a fish while it is hot (not exhausted) and subdue to remove the hook and immediately release. The nets I use in this form are from Sam Lacina.

Here are a couple I use, the small one I sometimes carry in a front pocket. It is amazing, I have used it on much larger fish than it was designed for.