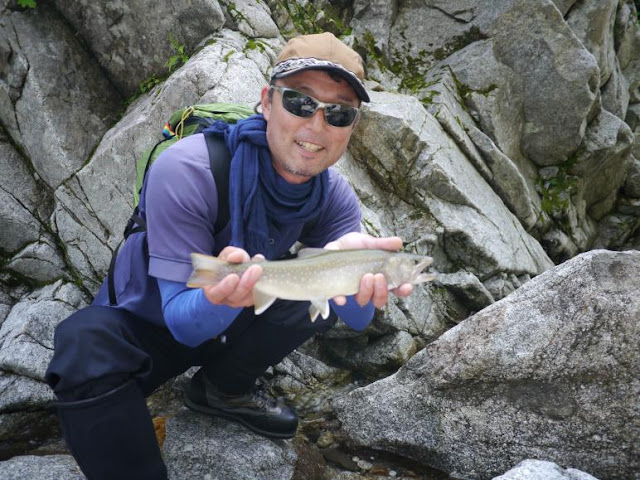 I had been very busy on business for last 2 months, and also we had unusual bad weather in this summer, so I could not go on Genryu trips at all. Actually 3 trips were cancelled or postponed. In September, the weather seemed to be getting better, and we planned one Genryu trip to Iide mountains in Niigata from 5th to 7th.

Iide mountain range is a series of mountains of 2000 meters class above sea level and its main peak is Iide-san (Mt. Iide) 2,105m. Iide-san is also famous as the mountain of religion (Shinto). There is Iide-san Shrine at the peak of the mountain which was established in AD625. Nowadays this area is very popular among climbing enthusiasts.

We planned to go across one of the peak to the stream over the mountains. As I mentioned that we had unstable weather this year, we checked the weather report many times every day. Fortunately it would not be bad at the weekend.

On Thursday night after finishing our work, we drove the car to the north west on the high way. We arrived at the parking of the trailhead of Iide-san around midnight. After setting a tent for nap, we had little talk having beer.

Daybreak of this time is about 5 o’clock. We packed the equipment and foods in the back packs and started walking. Firstly we climbed 700m taking climbing trail, but it is really steep trail, so we climbed very slowly in order to accustom the body. After a long struggling time we reached the peak, but it started raining around that time. Near the peak we had to find the hidden trail “Zenmai-michi” and we went down very steep narrow trail just like animal trail. It went well firstly but we lost the trail on the way and went down through a small stream passing many water falls. After 6 hours of walking, we arrived at the stream. We then were totally wet due to rain and walking down the stream. 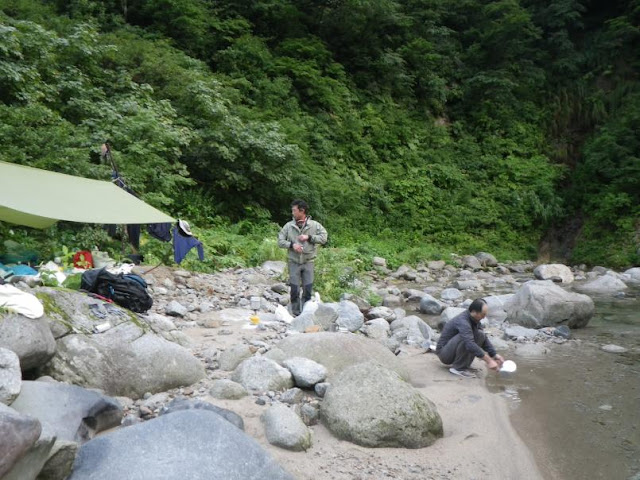 We checked the camp-site (temba) but one we were taught was not good with glasses like bush and the ground was very wet. So we walked a bit looking for good place for Temba and found a place of small terraces of sand. It does not look perfectly safe from swelling but there is escape on the back. We set a tarp, not tent or shelter, and changed the wet cloths. Time was just noon. We enjoyed lunch. It was still raining but not so hard. So we had some beer and enjoy talking looking at the stream and had nap listening to the sound of stream. 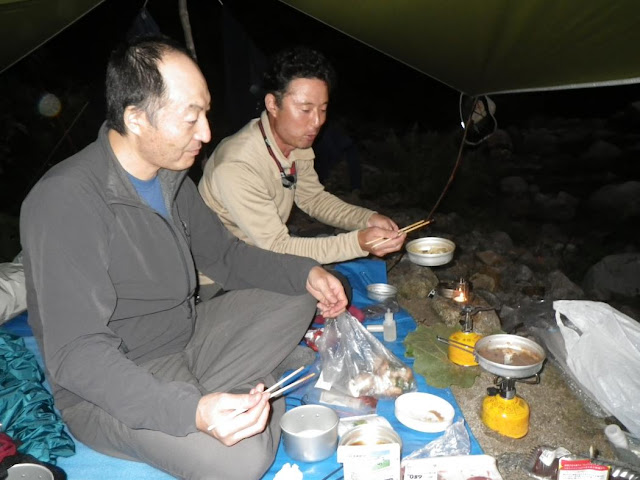 By the evening rain went up. A friend was just fished the shallow pool in front of the temba and caught about 10 iwana. Another friend and I were satisfied just looking at his fishing. Time was nearly evening but it looks like raining again, so we started “Yakiniku Party” (Grilled meat party) under the tarp. Having some beer and getting full. We were struggling against sleepiness, but we all slept in by 8pm. When I woke up, it was 2am. I could see the full of stars in the sky. I thought it would be good weather and slept in again. 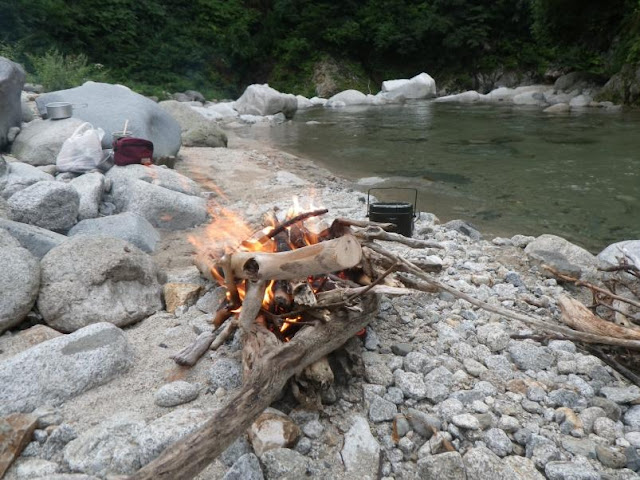 We woke up by 6:30 in the morning. There were few clouds but it was fine weather. We had breakfast slowly and got ready for fishing. We left the temba and started wading to upstream toward Sakanadome.

The stream was quite big as a headwater and it goes through large beautiful granite stones. It was not so steep stream and easy to wade. Fishing was marvelous. Probably there were not any fishers for several months. We caught 28 – 31cm iwana from every point.
Around 9am the sun came out from the mountains and the valley was filled with full of sunlight. Greens of trees and light emerald green water was beautifully reflected by the sun. I felt the valley was like shining. 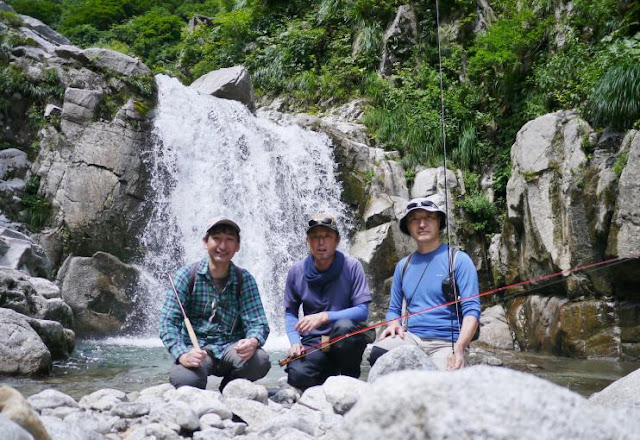 Bit by bit, the stream became steep and there were small water falls. We thought that we are coming closer to the sakanadome. After passing the armlet we reached the old sakanadome (ex-waterfall of fish stop). A friend fished over 35cm iwana. That was the biggest iwana we caught during the trip. He took photos and released the fish to the current. 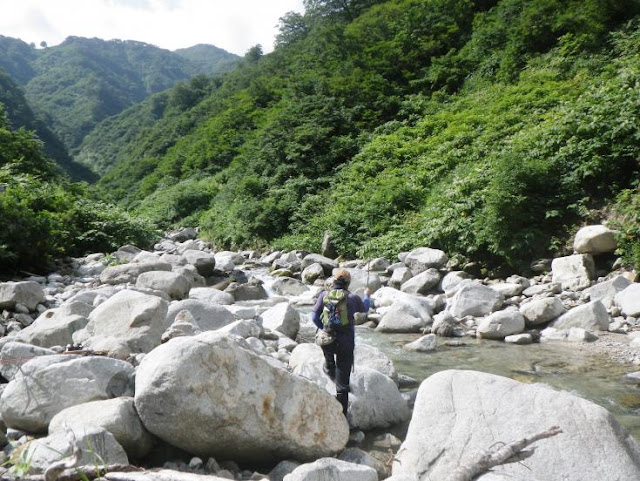 After this waterfall, we soon arrived at really beautiful waterfall like water curtain. We climbed it acrobatically, but about 200m from that waterfall is the sakanadome waterfall. We wanted to check upstream of it but there was no route and we packed up our rods. Time was just noon. We went down the stream a bit and had lunch by the stream. 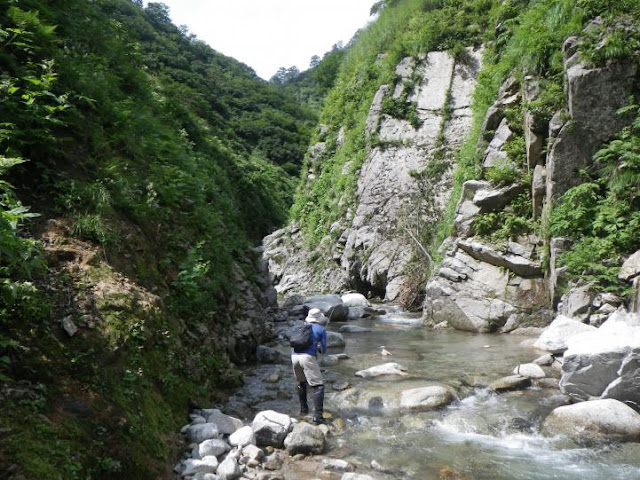 The sun was shining strongly like good summer day. The gin clear water was running through white stones. We were completely satisfied with our day and slowly started walking down to temba, thinking to have dinner by the stream with bonfire tonight.