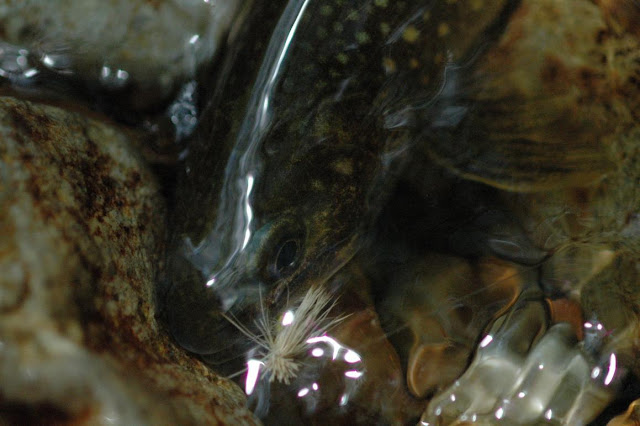 In my fishing field, Tohoku or Kanto district, when we go Genryu fishing, most of the time target fish would be iwana. Rarely we catch yamame in the river that runs through low elevation mountains or depending on the situation of the river, but when we say genryu fishing it means iwana fishing for us.

Iwana live in the highest part of the river than any other fish. There is no fishi living in the stream upper than iwana’s area. Sometimes we find iwana surprisingly high place in the mountains in a very little stream.

We have very high mountain ranges called “Japan Alps” at the central part of Honshu(Main island), and we can see iwana in the streams of over 2,200m in the Alps.

They are the fish that has very strong life force and eat nearly every living creatures that they can put in their mouth. Some giant iwana eat small field mice, small water birds, small snakes, etc. I once found over 1m giant iwana in a dam-lake by chance. I thought it is nothing strange if they eat a small bird or a small snake.

I must write little bit biological story about iwana here.

Iwana is the fish of Salmonid Salvelinus. There are 2 species of iwana living in Japan. One is called “Oshorokoma”. They are actually “Dolly Varden” and living only in Hokkaido (North island). They are kind of minority. They grow up 30 – 40cm. Rarely sea-run Oshorokoma is found.

Another species of Iwana is White-spotted Char and they live in Hokkaido and Honshu (Main island).

Nikko Iwana. They live from north part to central part of Honshu. They grow up 40cm – 50cm, but in lakes or dams we can find 80cm - 1m class rarely

Yamato Iwana. Indigenous sub-species of Japan. They live in quite small area of central part of Honshu. They grow up 25 – 30cm.

There is another very rare iwana called “Kirikuchi” living in the south part of Honshu, but they can be included in Yamato Iwana now.

All those iwana originally came down to Japan from northern sea during ice age, and after the ice age they were land locked because of rising of sea temperatures. So we can only see them in the mountain streams especially south part of Honshu.
We, Genryu Fishers, go into the mountains deeper and higher seeking for iwana, may be seeking for more beautiful river or greater nature, driving a car through long dirt mountain road, climbing over the mountain ridge, wading the stream, struggling with very heavy backpack, into the genryu deeper and higher. When we arrive at the genryu stream after long hard work and see iwana swimming in gin clear water, it is the best moment of the fishing trip. We could forget every hardness we suffered from and our hearts are completely healed. 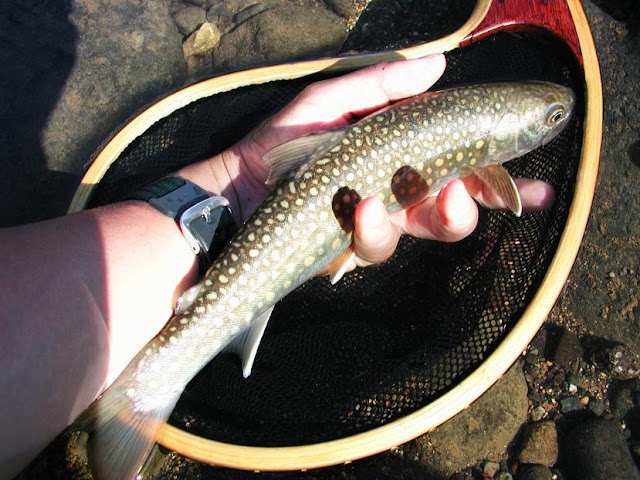 Iwana is also mysterious fish. I think their biology, strong life force and living place make them very mysterious. So we, gneryu fishers, might be under the spell-bind of iwana and seek for them to that remote part of the mountains.

Fishing iwana and travelling around many places, mainly mountains and small villages in the country, we sometimes head some superstitions or gossips about iwana. Also iwana was taken into the folk stories and regendries since long long time ago.

For instance, we have the folk tale like this.

Long long time ago in a small mountain village, people were planning to catch iwana by poison shedding. Then a travelling priest came over and told them not to do killing fish using poison. So people understood his teaching and decided not to do that, and they offered the priest some dumplings as dinner. But next day village people wanted to catch iwana and broke the promise. They did poison shedding. Then they found a giant iwana floated from the deep pool. People were very happy and took that iwana and cut the iwana then they found many dumplings from the iwana’s stomach.

The following stories are very famous too.

We sometimes heard that in the rainy day someone saw the iwana moving on the ground from a stream to another stream.

In the rainy reason iwana living in Japan Alps were going upon a little stream and skipping puddles and went over the mountain-ridge to the stream over the ridge.

Still nowadays we often say if someone fishes a Big Top-heavy skinny iwana, it will be hard rain and swollenness. This iwana is called “Ghost Iwana”.

I have books called “Iwana Gendan” which meams “Iwana Mysterious tales”, Part1 and Part2. The books gather those strange and mysterious essays and stories fishers experienced about iwana.

Yamame is the beautiful fish. Just like its name “Mountain lady fish”, they are like beautiful lady with make up and in an elegant dress . In contrast, Iwana is the uncool fish like his name “Rock fish”, but iwana is very charming and mysterious to us.

Also today, with his strong life force and intensive run instinct, they go up the stream into the deep mountains and dark valleys, to more and more up-stream of genryu, higher and higher to the mountains. They are just like us, genryu fishers, aren’t they? 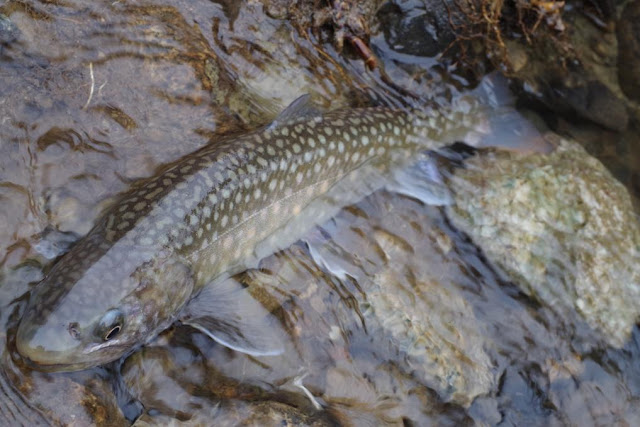