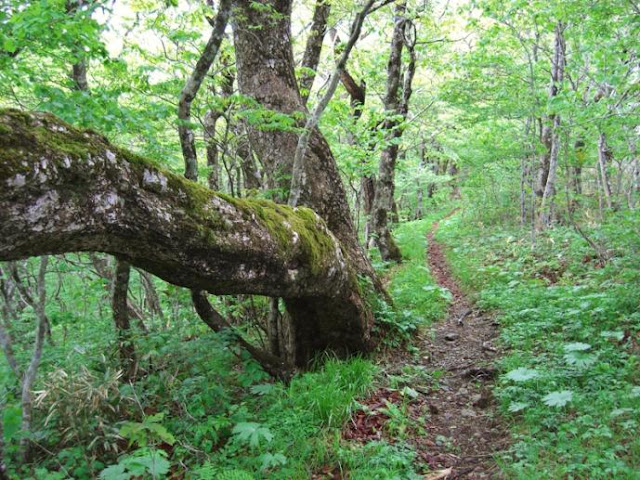 I wrote about approaches to Genryu before. We often take hidden small paths called “Zenmai-michi” or “matagi-michi” to go to Genryu. Of course we could sometimes take well- kept mountain trails. Anyway it is quite usual for us to climb over mountain ridges to go to Genryu taking those small paths. 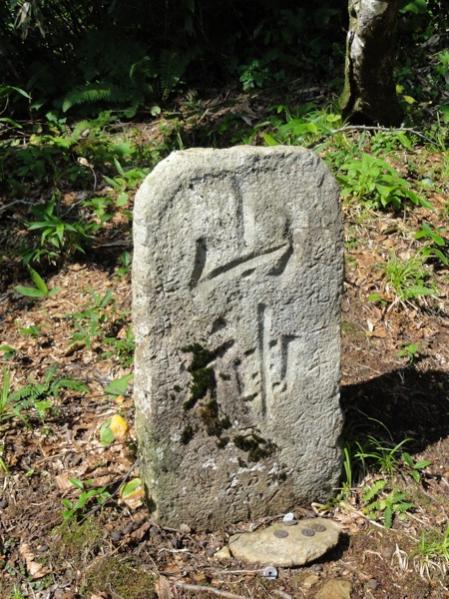 There is one of my favorite rivers called “Koide-gawa (river) or Oide-gawa (river)” in Iwate prefecture, north part of main island. The river is the arm river of Isawa-gawa (river) and runs through vast beech forests in the mountains. To go to Genryu area of this river, we take the 1300 years old ancient trail, which is called “Senboku Kaido (Road)”.

Senboku Kaido was to appear for the first time in the history record in 776 AD. Surprisingly this ancient road was supposed to be laid about 1300 years ago in such deep in the mountains. Afterwards the road was used as sub route between Akita-han and Sendai-han (Those days Japan was made up by a lot of small countries.) When they laid down the modernistic national road in 1910s, Senboku Kaido was disaapeared from the map. It was disappeared from the map but the road was still existed across the middle of virgin forests that escaped from the development. The existing entire road is about 24km, and Koide-gawa is across about the middle of the route. In recent years, preservation activities have been made by the local people that values its historical value, and such as mowing is performed on a regular basis.However, the current Senboku Kaido has just like a minor mountain trail. 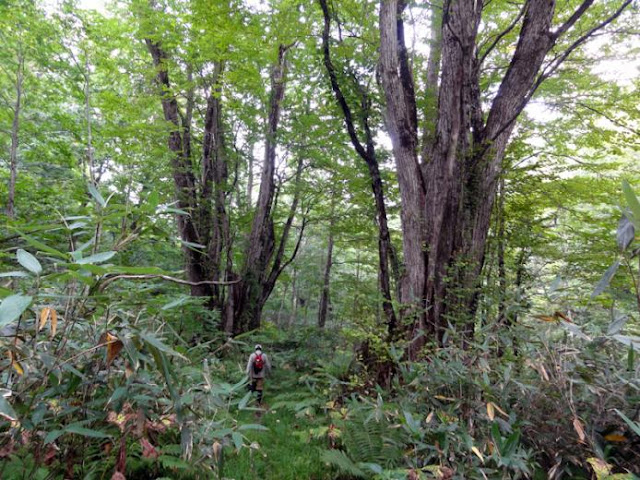 Long time ago, there were Bansho (Checking point of boundary), Nakayama-goya (Evacuation Hut) and Koide-no-Koshigoe (Evacuation Hut for crossing river) on the road, but now, it is only possible to feel the remnants of them to the flat ground. But those local people also set up signpost stones at key points of the road, and the old looks of them have given the road a deeper flavor. Also there is the stone monument of Mountain God which was made in Edo period. The travelers once upon a time pray for safe travel to this god. We too prayed safe trip to Koide-gawa when we walked through the Kaido.

It was more than 10 years ago when I first walked Senboku kaido was in the end of May. A friend of mine and I walked the road from the east Iwate side. We drove the car up to the end of dirt forest road at 680m at mid-night and had short sleep in a tent. We got up at first light and packed equipment and foods for 2 days into the back-packs. Firstly we took short cut to Senboku Kaido. We climbed about 200m steep trail. It was almost in the beginning of summer in lowland but there are some lingering snows by the trail and trees were seemed to have new green just recently. After about 30minutes hard work, we merged onto Senboku Kaido. It looked like a narrow mountain trail that was well-trodden. There are many giant beech trees by the trail and we could gaze at the majestic figure of Mt. Yakeishidake (1547m) to the north. After passing Mt. Okurumi of 934m, the trail became down slope. We went down by Tsunagi-zawa (stream) and Tochi-kawa (stream). About 3 hours of walking we arrived at Koidegawa. 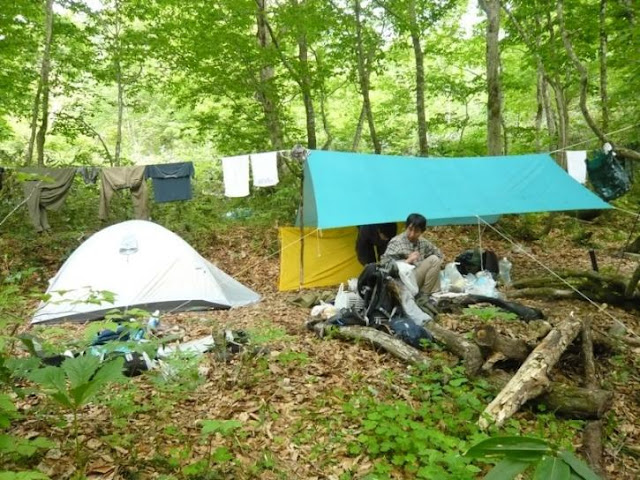 There is a nice Temba (Camp site) by there. So we set up base camp and enjoyed 2 days fishing in Koidegawa. Kidegawa has many arm rivers and we can fish main stream and other 2 arm streams, Kashiwa-zawa and Tochikawa. We fished iwana in the main stream on the 1st day and and fished Tochikawa on the 2nd day. The end of May is just beginning of fishing season there and we had wonderful fishing everywhere. It was still quite cold at night but protected by bonfire we had fun nights drinking beer and whisky. 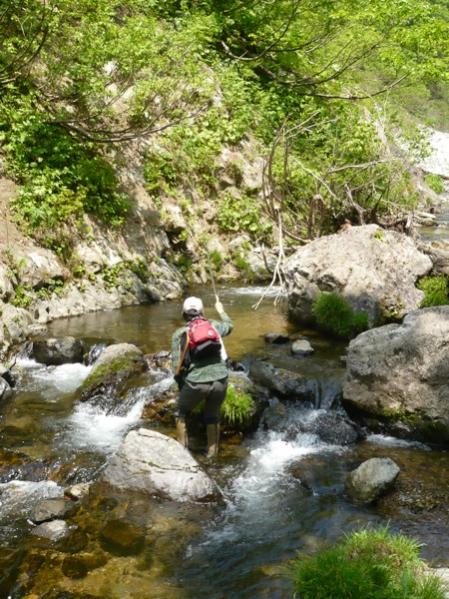 2nd time we visited Koidegawa was in the beginning of June. It was 6 years ago. I was with 2 friends. That time we started walking from west Akita side. From Akita it takes about 4 hours and half to Kidegawa but I wanted to walk whole the road. The time was very good for Nemagaritake Banboo shoots(Very tasty small bamboo shoots). There were some local people picking bamboo shoots from very early in the morning. We picked up some bamboo shoots and some other sansai on the way. Bamboo shoots are very good for tempra and miso soup.

We arrived at Koidegawa by the noon and set up the camp at the same temba. The weather was so nice and we had great fishing in Tochikawa. At night we made Iwana sashimi and cooked tempra and miso soup with nemagaritake bamboo shoots and sansai. 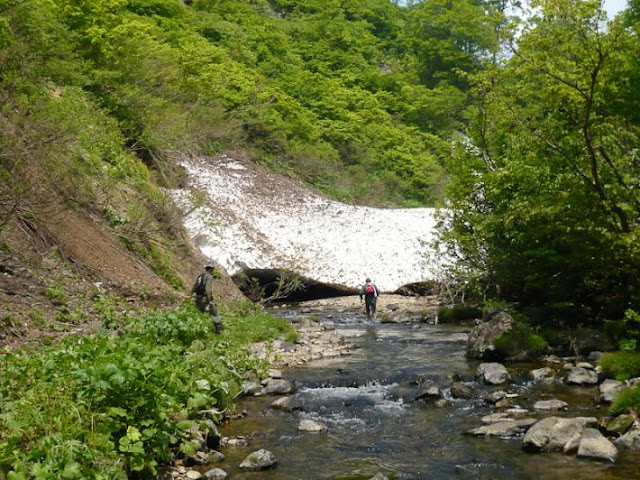 The 2nd day, we tried to go to Sakanadome (Fishi Stop Waterfall) of Kashiwazawa. There are two 30m class waterfalls in Kashiwazawa and Toshikawa. So we wanted to see one of those waterfalls. Fishing was also fantastic on that day and we also enjoyed stream walking but we could not go to Sakanadome because of huge snowy gorge. It was bit disappointing but we had already had enough of fishing. We returned to temba and started the party from early time until midnight. One thing I remember is a friend of mine was so drunk by the end of the party and took 30 minutes from the bonfire place to 15m distant his tent. Nice memory. 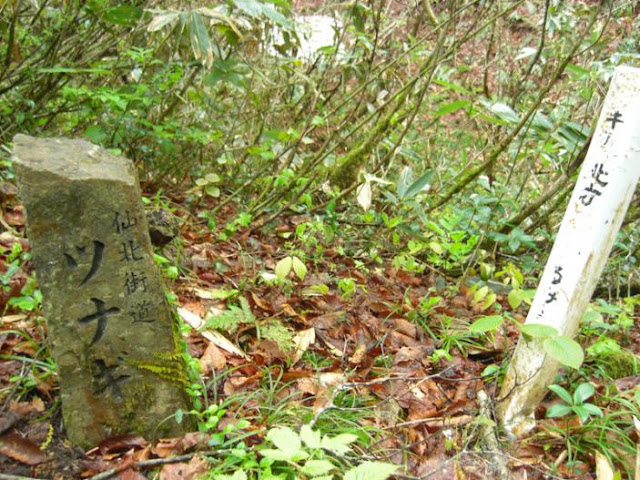 In fact, I was planning to go to Koidegawa again at last weekend, but it was raining quite hard during the week and river was swollen. So we gave up going there and went to the other rivers in the lower mountains near to the ocean. It was OK. We could enjoy nice fishing there.

We had to postpone Koidegawa fishing trip to the next year but I feel I have something on my mind. I think it is Nemagaritake. May be I really miss Nemagaritake Bamboo shoots. Now I am thinking to go to mountains for Nemagari Bamboo shoots hunting at this weekend.