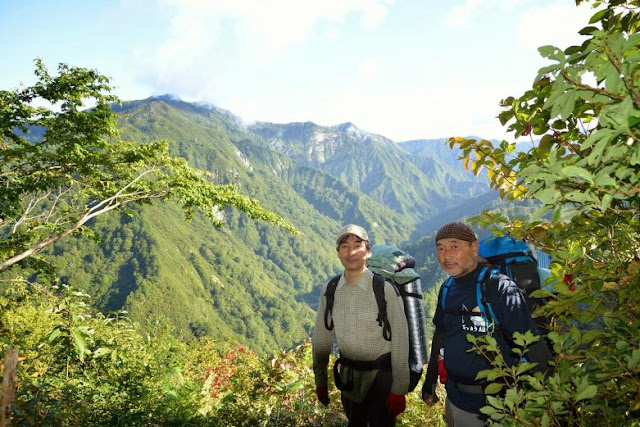 I planned this Genryu trip with famous Genryu Tenakra fisher, Yuzo Sebata, but unfortunately he had to cancel the trip because of his backache. It was very disappointing but I think we can go with Sebata-san next year. Anyway we went on the trip without him.

Always at this time of the year, late September, is difficult time for mountain stream fishing. Fishing season of mountain stream fishing is ended by the end of September. During the season trouts are experienced pressures from fishers and they became very nervous. Besides we have a couple of 3 day weekend in September. Many fishers rush into streams as we have very limited time for fishing. Even Genryu areas too. Many Genryu fishers go into the mountains for their last fishing trips.

We were the group of 3 people this time, but one guy had never gone on Genryu trip. So we decided to go to one easy stream in Asahi-Renpo (mountain ranges) located in Niigata.This stream is very beautiful stream surrounded by picturesque mountains. We have to go across a mountain ridge but it is only 250m climb and takes about 3 hours to the temba(camp site). Asahi-Renpo is the mountain district of 60km from south to north and 30km from east to west. The main peak is Oasahidake(1,870m) and it is very heavy snowfall area. There are bountiful forests of Japanese beeches and oaks.

On Friday night I met one friend on the way and drove the car to north-west. As another friend lives in more north than Asahi-Renpo, we met him at the station of Oguni-machi which is the gateway town to Asahi-Renpo. It was raining before we arrived Oguni-machi but it is just like passing shower, and there were full of stars in the sky then. Weather forecast said that it would be fine weather for 3 or 4 days. We drove the cars to the entering point for the stream. Firstly we drove in rice fields and we see houses here and there, but 15 minutes later we were driving in the field with no lights and houses. Yet, we arrived at car parking spot, but there are 2 entering places to the stream. So we checked both places but there was no car parked fortunately. 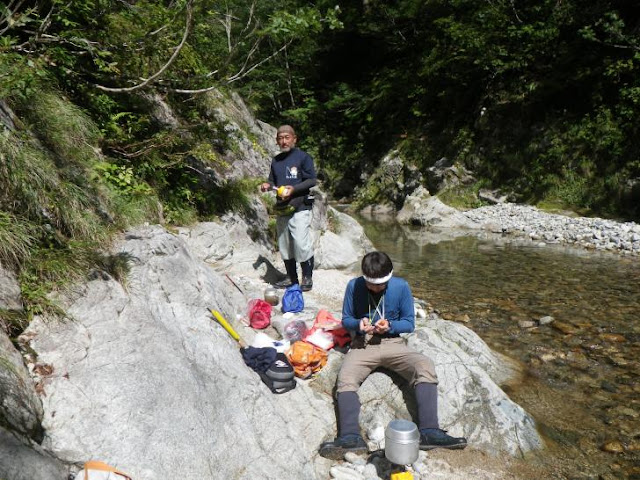 Next morning, we woke up at first light and checked our packing. When we finished the packing, it had become quite bright. To climb the mountain ridge we had to cross one quite big stream using a scary suspension bridge. After the bridge, we walked narrow path to the peak, but it is not too hard. We arrived the peak in 2 hours. 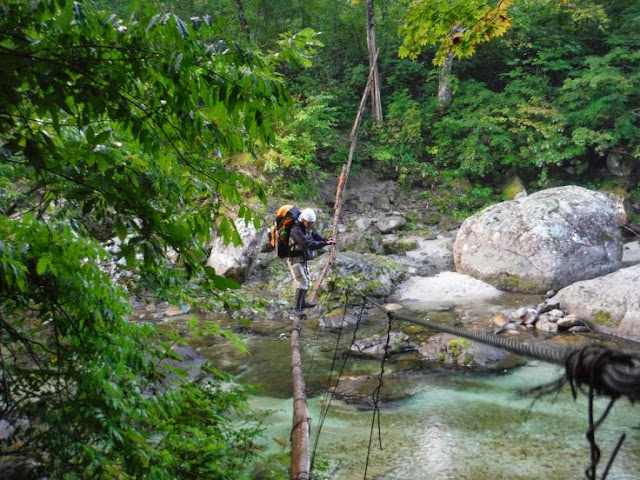 We had a break at the peak and enjoyed the panoramic view of Asahi mountains under the blue sky. Going down was easy we were at the stream in an hour. We decided to walk doing fishing to temba (camp-site), but we found many footprints on the sand by the stream. I thought quite a few people came here by this weekend. We had no fish as I thought.
Anyway we had plenty of time. We set up a tarp at temba and unpacked our back-packs. This tempa was excellent one. We had sleeping place on safe high bank and flat place and in front of the temba is wide dry riverbed where is the best place to have bonfire party. Really nice location. 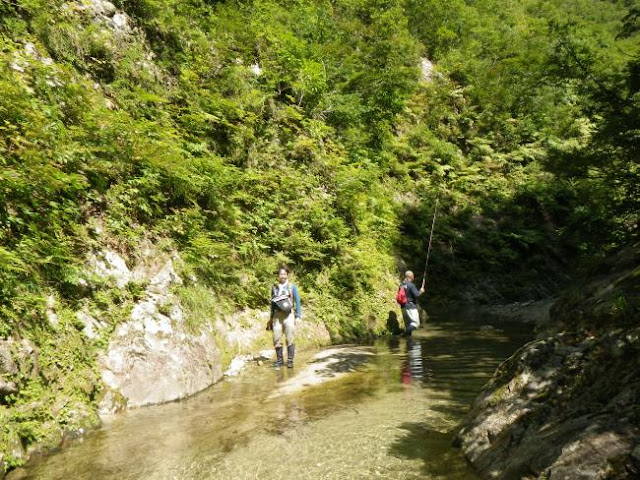 In the afternoon, we started fishing. Firstly I fished but reaction of iwana was not so good. They chased a fly but very quickly and came out only once. It is like yamame in the high pressure streams. Even so, I fished first iwana about 80m from the temba. I though it would not be too bad, but a minute after we found a group of Sawanobori (Stream climbing) people walking towered to us. This was the end of this day. We talked for a few minutes. They would go up all through the stream and climb the mountain and go down another stream for 3 days. We said take care and saw off this group of 5 people. We did fishing little bid after but we had no reaction of iwana at all.

We decide to rest the river for the next day and returned to the temba.

We had a nap in the afternoon and started bonfire from 5 pm, still bright time. We had many menus that night. It was like Izakaya (Japanese bar restaurant) at Genryu. We saw many dazzling stars in the narrow sky of the valley. It is just beginning of autumn and there were less mosquitos but it was not too cold actually very comfortable night and I started to drink wine for next day. 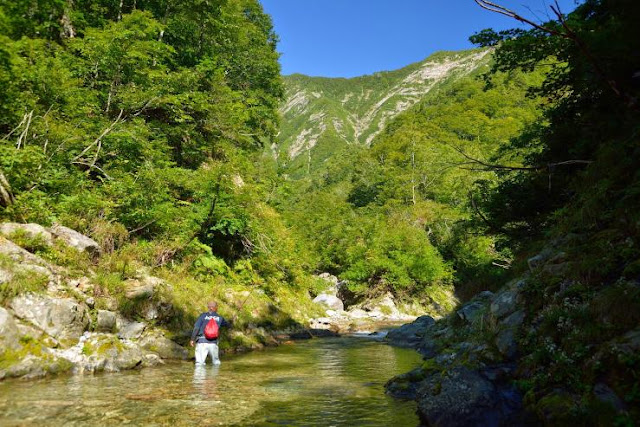 Next morning had come. We woke up by 7 am. The morning in the mountains is always great. We had leisurely breakfast and started fishing when the sun light came down to the valley. We only walked to the place we went yesterday and started fishing one after the other, but we had no bite and no fish at all. Situation is just like yesterday when Sawanobori people waded upstream.
We checked every point where we though people did not walk but result was same. No reaction. I though 3 or 4 groups walked the stream even before the Sawanobori group and yesterday was fatal shot. After 3 hours of fishing and no fish in Genryu is disaster.
I decided to go into one armlet. I knew there is one armlet and there are fish. I talked about it to friends, and we walked to the armlet and went in without hesitation. As a result, we had some good iwana in the small stream. We fished there for about an hour but the valley became very hard to wade. It was like rock climbing. We decided to go back to main stream.

After coming back to the main stream, we had lunch and relaxing time by the stream under the sun. It was good moment after catching some nice fish. We went to the sakanadome (Fish stop waterfall) in the afternoon but we did not have any bite. I think impact of wading is very big for iwana, especially in Genryu where fish do not see humans normally. They get nervous very quickly. 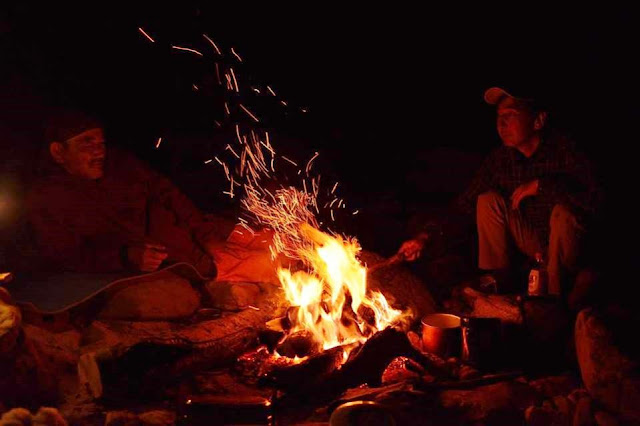 We had bigger bonfire in the evening and had big dinner using the foods remaining.

This time fishing was not so good but we had so good weather and enjoyed the valley very much. In the evening, we talked about many things and laughed at many stories. My wine was run out by 10 pm and we fell asleep by 11 pm. 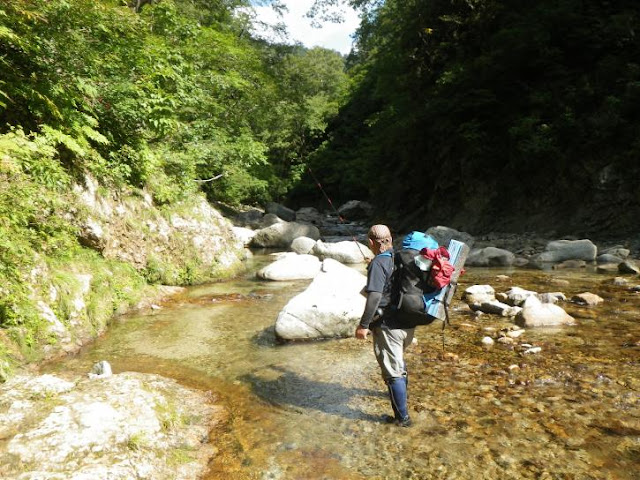 In the morning of the last day, we took the breakfast very slowly. We withdraw the tarp and packed the equipment in back-packs. At the end we cleaned up the bonfire and its mark and started to walk down the stream.

After climbing the steep path when I reached the mountain ridge, there is a nice, gentle breeze blowing up from the opposite valley. I just paused for a moment and looked up. The sky was high. I felt the autumn is slowly coming.