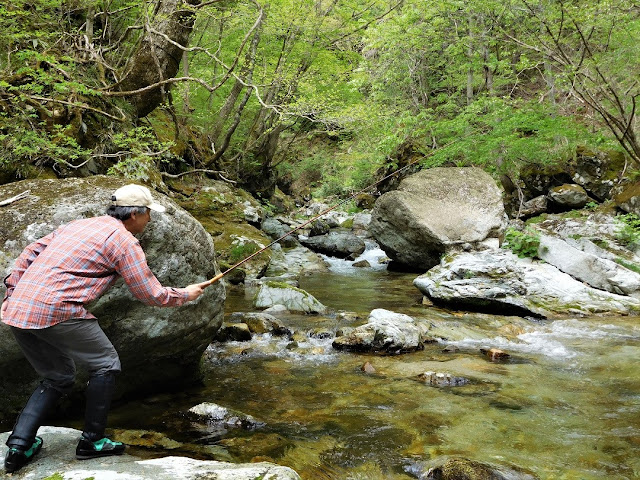 I sometimes do Tenkara fishing with a traditional bamboo rod in keiryu (mountain stream). We call a traditional bamboo rod “wazao” in Japan. I like the atmosphere of wazao, and I have been using one wazao made by my friend, who is a wazao craftsman, for a long time. I go keiryu fishing with my wazao 2 or 3 times during the keiryu fishing season. I once went to the genryu with Sebata-san for an article about wazao tenkara fishing for “Keiryu Magazine”.

Wazao means "Japanese fishing rod" in direct translation, but it is actually a traditional Japanese fishing rod made of bamboo. Unlike the hexagonal bamboo rod for fly fishing, this wazao uses natural bamboo in its original shape. It is not known when wazao were actually invented, but in 1723, Japan's first fishing manual book"Kansenroku" already had a description of "how to choose a jointed type bamboo fishing rod", so it means that fishing rods made by combining several types ofbamboos were already made by that period.

The historically famous wazao were made in 4 areas in Japan. They are the "Shonai-zao" in Tohoku Yamagata, the "Edo wazao" in Tokyo area, "Gujo-zao" in Chubu Gifu, and "Kishu-zao" in Kishu Wakayama. Among them, "Shonai-zao" and "Gujo-zao" were famous for keiryu(mountain stream) fishing. Originally, "Edo wazao" was started with rods for small fish in the sea and salt-water boat fishing, and later as hobby fishing rods, herabuna rods and keiryu rods were made. The tenkara wazao is only a minor part of those wazao.

At that time, there were craftsmen who made bamboo rods locally in every region of Japan. The rods they made were simple and practical rods, and the prices werenot so expensive. However, from around that time, some famous master craftsmen had already made valuable bamboo rods with beautiful finish, which was called the "signature inscribed rod", which was well-known. The bamboo rods they made were accurate and beautiful, and were made of high-quality Urushi(lacquer) and looked like works of art. In the era when ordinary crucian carp rods cost at 3000 to 4000 yen, you had to pay for price of 40,000 or 50,000 yen, sometimes about twice that price. Representative of those famous rods were Edo wazao, Shonai-zao, Gujo-zao, and Kishu-zao.

Eventually, the times have changed. Fishing rods have changed to those made of fiberglass or carbon. Bamboo rods disappeared from fishing tackle stores, and there were no more bamboo rod craftsmen in each region.

However, craftsmen who build such as Edo wazao and Kishu-zao, who were called virtuosos, remained, and the rods they produced came to be called "wazao" from that period.

The charm of the wazao is, after all, the beauty of its natural shape of the bamboo as it is. You can say that there is no one same thing in wazao. And the supple action of bamboo gives us the unparalleled comfort of casting and the good taste of bending of the rod when fish is caught.

The wazao I have been using for many years is 3.3m long 3 piece rod. It is a standard rod or little long rod as a Tenkara wazao. Since it is made of bamboos, it is a heavier rod than a modern carbon rod, but I have been satisfied with its casting feeling and fishing taste. 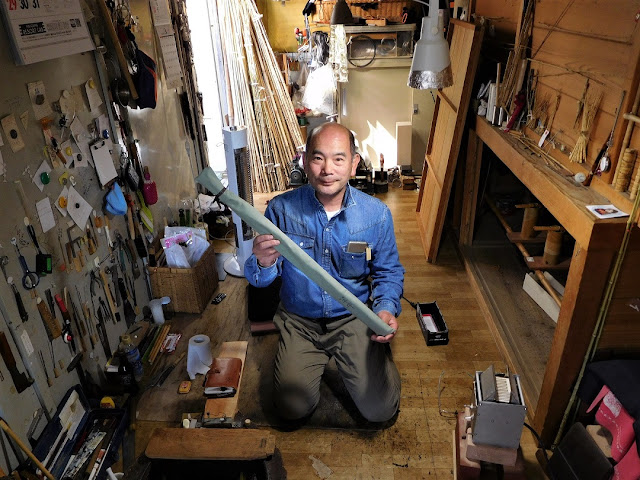 One day when I visited Sebata-san, and we were talking about wazao, he showed me one of his wazao. It was unbelievably wonderful wazao. A 3.0m long, 7 piecetenkara wazao made by "Saonaka-san", a famous Edo wazao craftsman. It is quite rare to see a 7 piece Tenkara wazao actually. This is because the bamboo rod is basically heavier as the number of sections becomes more, and the action becomes stiffer. However, Sebata-san's wazao was really light and the action was wonderful and supple. 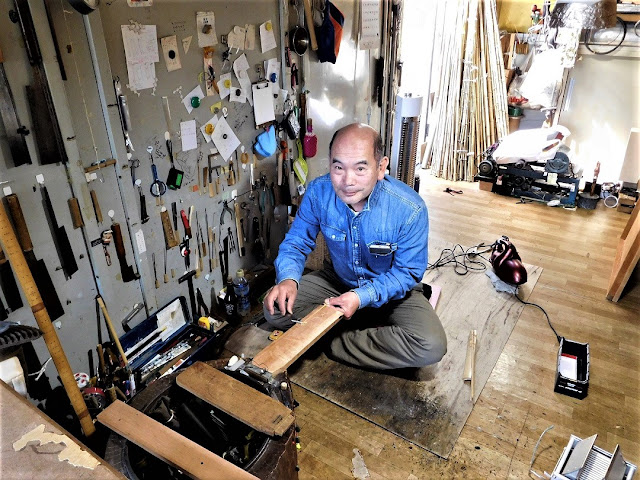 In the old days, the tenkara wazao was basically 3 piece rod, and even though the 5 piece rod was heavy, but that Sebata-san’s 7 piece rod was lighter and more supple than my 3 section rod. I was really surprised. From that day on, I realized that "Saonaka-san" was one of the greatest craftsman of wazao. Actually, I knew Saonaka-san in fishing magazines. Also, after that, I had the opportunity to talk with Saonaka-san by introducing of Sebata-san. Saonaka-san was a person who looked about 10 years older than me. From that time, I decided that one day I would surely ask him to make a Tenkara wazao. 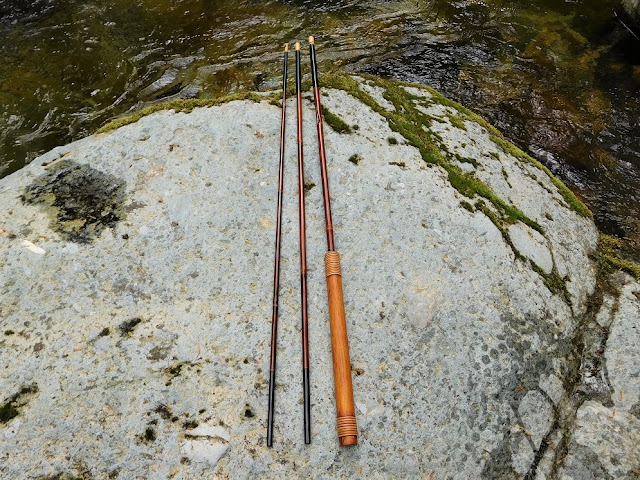 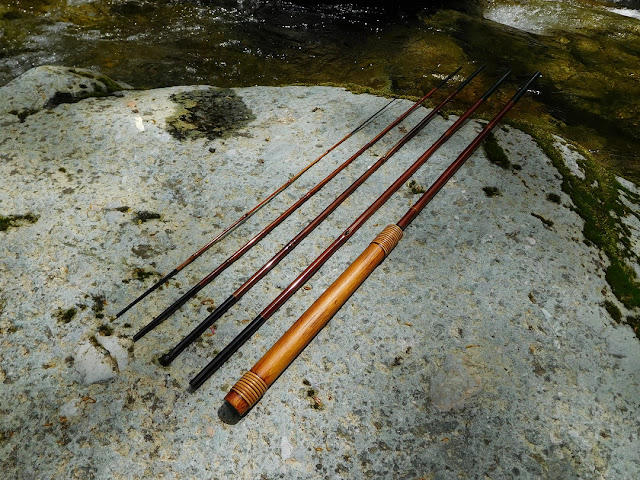 They say, at present, there are 11 craftsmen of Edo wazao, but all of them are very old and Saonaka-san is the youngest in his 60s. Saonaka-san said that he has been working as bamboo rod builder for about 50 years after he graduated from junior high school and became a disciple of Edo wazao craftsman. We call that “Totei-sei (Apprenticeship)” in Japan, and he is probably the last wazao claftsman in Japan who started the career with Totei-sei. Sebata-san says, "Saonaka-san is a craftsman who will become a human national treasure someday in the future."

Last year, in October, when the mountain stream fishing season was over, I visited Saonaka-san's workshop. I made my mind to order the long-cherished tenkara rod. My order was 5 piece rod which was from 3.1m to 3.2m long. Finished with dark Urushi(Japanese lacquer), the joints are dark green, and the grip has a rustic design with an old-fashioned intention of wisteria vine wrapped around paulownia wood. I visited him in October because it was said that it would take about half a year to complete a rod. So hopefully I wanted to use the rod in the next fishing season.

The year has changed, and Saonaka-san called me in the middle of March. He said that my tenkara rod was completed. Immediately, I visited Saonaka-san's workshop again at weekend. The rod, which was finished with dark urushi, was really cool, and combined with the simple designed grip, it had a very nice atmosphere.


Immediately I connected the rod and try to cast. It was very light weight. And the bending of the rod is very smooth and flexible. I hold the rod horizontally and slowly rotated it. The rod was parfectly straight. It was a wonderful work. I have nothing to say. I thanked Saonaka-san for his wonderful work.

Saonaka-san said, “Use the rod for a while. I will adjust it if it comes out of tune, so bring it with me anytime.” The craftsman will take great care of the rod he made for long years after he sold a rod. If it bends, he will adjust it, and if the rod breaks, he will make the part. This is another great point of craftsman works.

Every year 1 day in the consecutive holidays in early May, we go out to the genryu of the Naka River, which flows through our local area, for the first genryu fishing of each fishing season. This year, I am going to take Saonaka-san's Tenkara wazao with me. Under the refreshing clear sky of May, how good feeling it will be to cast this wazao in the mountain stream in fresh green forest. I am very much looking forward to it. 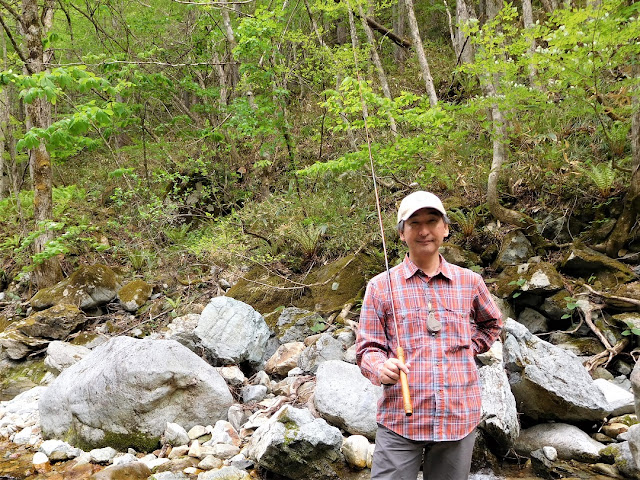