I've always had an interest in Japanese culture. The Japanese way make sense, their architecture is aesthetically pleasing, their community acts appropriately. The Japanese markets in my area are always affordable with products not found in American markets.

I bought my first sugegasa in the 80's, I believe I got my first one from an International market place. It was made of straw like the one I use now. I have always had at least one rice farmer hat somewhere in the house. I used them for working outside and I remember one of them getting away from me, lost in a dust devil, the thermal literally carrying it into the sky, I watched it for a while thinking I'll just follow it and it will come down but no, not the case, it was lost in someone's back yard or out in the desert... That's ok, I'll get another one, they don't cost very much. 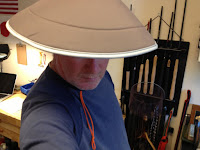 Ever since Kavu offered a version of their sugegasa, the "Chillba" I've owned one. They are made of cloth and foam, they float and you can stuff them for short periods of time so you can travel with them. Kavu is a progressive company and they do a good job with their rice hat. If you want to get fancy, they have many different patterns to choose from, I have always stuck with the basic colors.

In the nineties I started using them for small stream fishing. Back then, Yoshikazu Fujioka and I were making Internet sites on small stream fly fishing, his site tailored to his area, my site focused on the places I fished. I was always reading and looking at the pictures of Japanese stream anglers when making my own site. It is amazing, I knew about tenkara, sawanobori and many other Japanese things but it was so far away. I was fishing a zero weight in small streams and doing so well with it. Yoshikazu and I have been doing this for a long time. I learned about tenkara first from him but I had no idea.

How could tenkara be so much better?

That was like going backwards to fishing when I was a kid.

I knew about a lot of Japanese fishing things but had no idea the tenkara rods did what they do so well.

I did use a few Japanese items and sugegasa are functional in Arizona. In my area, the sun is hot and relentless. They work well for keeping the UV rays off your head. I also wore them when I was fishing in Glen Canyon fly fishing for river rainbows. When it got windy, I would switch to a ballcap or some other sort of hat.

In 2009, I quit fly fishing to learn about tenkara and at that time, even more Japanese culture and fishing were my interest. I knew I wanted to find out about Japanese tenkara rods and equipment. I found out about Yuzo Sebata and it was pleasing to me that he was iconic with his sugegasa. I finally ended up visiting Sebata san and was able to see his laying there in the bansho. Funny, it was just a part of what I understood as functional equipment and I didn't even give it a second thought.

That was my problem, I got home and realized, it was my second trip to Japan and I did not buy one while I was there. Sugegasa are large and unless they are made to fold or crush down, they are big and cumbersome for travel on a plane. They are farmer's hats, not a travel item. I just didn't pick one out because I didn't want to carry it. I meet a new friend at the bansho, Isaac Tait and he also wore a sugegasa. Probably the only other American tenkara fisher that wore one with any authenticity in Japan.

You see, Isaac san lived in Japan and his wearing one was a tribute to the old ways and it is quite functional. I have seen many people wearing them because it is Japanese and it is...ahh,  nevermind. I asked Isaac san to join us at the bansho, Sebata san telling me, "invite your friends, this is a fishing party." You would not believe the friendships I help foster with my own invitation to visit Sebata san. One day I will tell the story of that but today isn't that day.

This is the story of my own sugegasa from Japan.

I asked Isaac san if he would help me pick up one and send it to me. He told me, "Of course Adam san, lets pick one out together for you." And we passed back and forth, comments on the different ones that he had available in the markets in his area. We finally decided on a humble one that didn't cost much. It arrived in a big box and it had a couple of bands to attach depending on the size of my head. I just used a couple of tie bands. I could have used some string but I wanted it simple and it took literally two minutes to band it on and cut the tag end. If I needed, I could cut these and replace the band with another one. 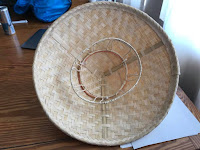 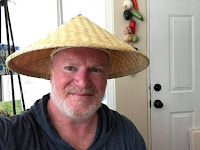 I always liked the way Sebata san carried a few flys in his. It wasn't that important at the bansho to look at his and ask him. He did hand his sugegasa to me during my visit and I did see the piece of wet suit neoprene material but I didn't put too much thought into it at the time. It wasn't time for that. But now I wanted to kit mine out that way and I didn't want to re-invent the wheel so I remembered that Danial had taken a video of Sebata san and it had a close up of his flys stuck in his hat. I found the video and in short order, I had my picture so that I could fix mine the way Sebata san did his. 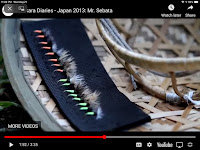 I get a lot of my stuff from eBay. It's just this place where I can pick and choose. It took me a while to find a small piece of neoprene that was reasonable. I looked now and then for a piece and couldn't find one. The other day when I look, I found a place where they offered the right thickness and at a reasonable price. It was an 18" square piece too, enough for the rest of my life so I purchased it and in short order it arrived.

It's always fun for me to figure out the best method to do things and I thought a little bit about how I was going to attach the neoprene piece to the straw. I thought first I would tack it on with some silk thread, no, too much work, how about glueing it on? Yes, that's what I will do. What kind of glue and I thought for a while, really, what kind of glue?

Glue tech is important to me. When I was making bamboo fly rods, I would have lengthy discussions with many other makers on what glue they used for binding their bamboo rods together. My teacher used Nyatex so I ended up using it too. Nyatex is a glue that General Motors uses for flocking the rubber window trim on car doors. It is some serious stuff and I really like it but difficult to buy and in small quantities? It's a two part glue and not all that many makers use it. I'm not going to ask one of my old friends for some so... 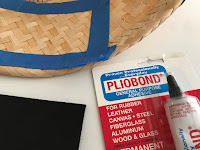 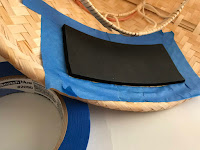 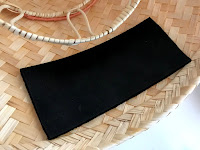 I'll use Pliobond, it has an interesting story behind it. It was developed and used for plywood bonding to metal. I had used it on a couple of beautiful bamboo rods I made to glue the metal ferules to the bamboo blanks. Really interesting stuff. I've got a little bottle of it but it's getting old. It is sold at hardware stores, so I took Noah and we went off to our local Ace Hardware and found out that they were not carrying it anymore but there was a single tube of it available in the discontinued bin. I didn't know it came in a tube, I've always purchased it in a little brown bottle. I bought the tube and some blue masking tape so that I could mask off where I was glueing and do a nice job. I really like Pliobond and it works well for bonding rubber to wood, wood to metal, all different kinds of applications.

I always have a few kebari for myself that Sebata san gave me. I also have a bunch that I give to friends that I am helping orient or turning on to tenkara. Sebata san's kebari have saved the day more than a few times, enough that I will always carry them with me.

They are my magic kebari.

I'm going to keep a few under my hat just like Yuzo Sebata.

I think I will also add in a few flys from Jun Maeda, Toshiro Todoroki, a few of my wrong kebari and well, I'll pick out a few kebari from other special friends to keep with me under my hat. 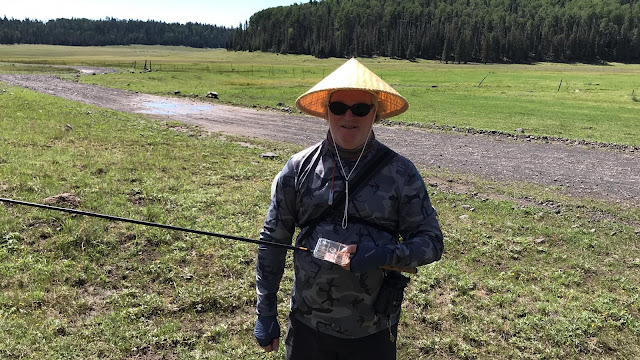 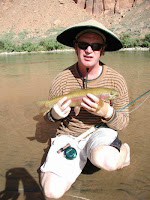 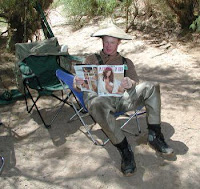