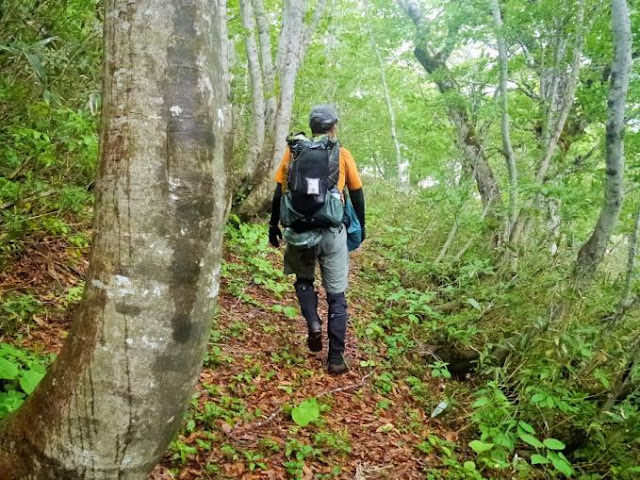 In the beginning of last August, I accompanied my friends who were members of the famous genryu fishing club “Tanidoraku” and went Koraide-river in Shimoda-Kawachi mountains in Niigata prefecture for 2 days fishing camp. To approach Koraide-river, we took a zenmai-michi (zenmai-path) made on the cliff along the Kasabori Dam and the path went through a huge slab rock wall called “Urui-Sadori”. A friend of mine said it took about 2 and half hours to get to Urui-Sadori taking that zenmai-michi, but the zenmai-michi was in very bad condition when we went there in August. The path was crumbled in many places by the landslides, and many parts of the path were bushed very badly. Clumbling was because of heavy rain or earthquakes but bushing because people do not use that road these days. 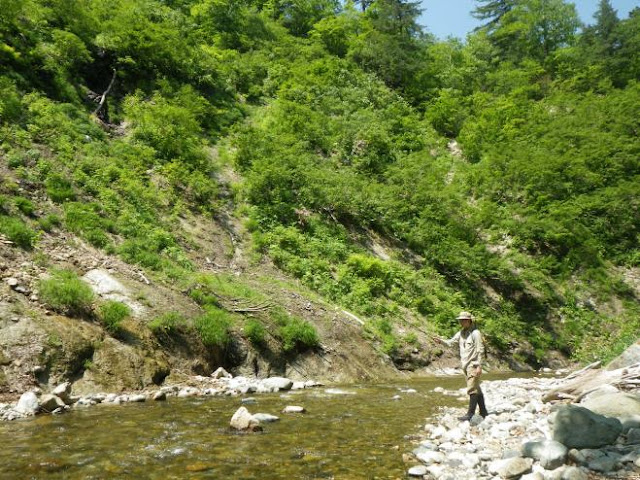 It was very hard to walk on that zenmai-michi while holding a heavy backpack on our back and push through the bushes. We could not reach Urui-sadori even after walking 4 and half hours. Besides Niigata was terribly hot with foehn phenomenon on that day, so our pace of walking did not go well at all. Finally we decided to go down to the stream and wade to the confluence of Koraide-river and another tributary Okawa-river and set up tenba(camp-site) there, but as soon as we got the stream there were many Mejiro-Abu (horsefly) waited for us and tried to sting us. When we arrived at the tenba we were exhausted. We spent almost 7 hours to reach the place located far much down-stream than we planned to camp. 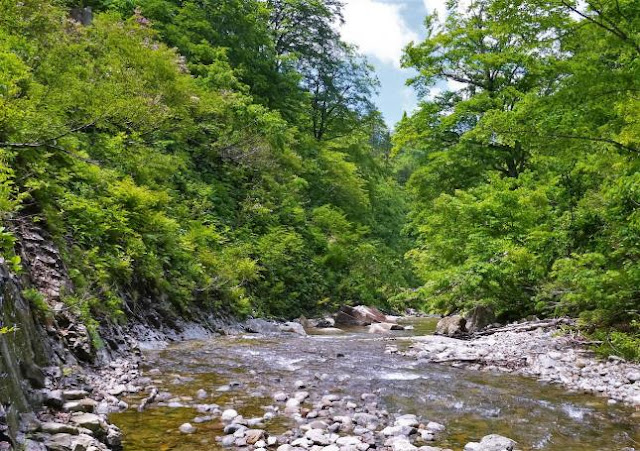 We had late lunch and set up tenba. We were still very tired but went fishing to Okawa -river, but the water level was very low and fishing was ended up with miserable result. That day turned out to be a totally unlucky day for us.

I am worried over the last few years that the state of the zenmai-paths is getting worse and worse in many places. For instance, we planned to go to Miomote-river which runs through in the centre of Asahi-Renpo (Asahi Mountains) in last September, but the zenmai-michi, which used to be continued to the considerably upstream of the river, was nearly faded into the bushes because no one use the path for sansai picking or mushroom hunting these days. Someone told us that we could take zenmai-mich only for first 1 km and then we should go down to the river and wade upstream. It is far much better than tracing the fading zenmai-mich. In fact those zenmai paths or foot paths made along the streams are so usuful and helpful for us genryu fishers. Losing these paths is very inconvenient to get to the core of the genryu in shorter time. 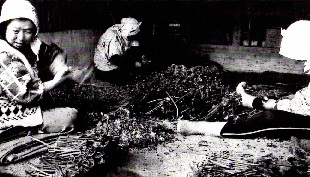 May be by ten years ago, there were still some those people entered the mountains, and the zenmai-michi and foot paths were barely maintained, but it has become much less to see such mountain residents in recent years. For instance, population of Matagi (Hunters) has decreased these years and the number of wildlife population has increased, but too much increase is not good. The ecological system of animals and plants has been broken in many places. The damages of the agricultural field caused by wild animals are increasing, and cases of people being attacked by bears are also increasing because bears often come into towns and villages nowadays.


In my most favorite genryu fishing field Asahi-Renpo (Asahi Mountains) , there used be Matagi, Zenmai pickers, Shokuryoshi making their lives in Asahi-Renpo based on Miomote village since long long time ago. So we could take zenmai-michi or foot-paths in every valley when we went genryu fishing. In1985 Miomote village was closed by regional administration, and it disappeared under the water of huge Oku-Miomote Dam in 2000. Miomote village was a very valuable village on Japanese folklore. People in Miomote village were moved to near-by villages or towns, and also the residents moved to the neighborhood villages aged year by year. So people who could enter the mountain decreased one after another. Zenmai-michi that people stopped walking becomes to a bush with an amazing speed. Depending on the location, but the foot paths could disappear in a couple of years. 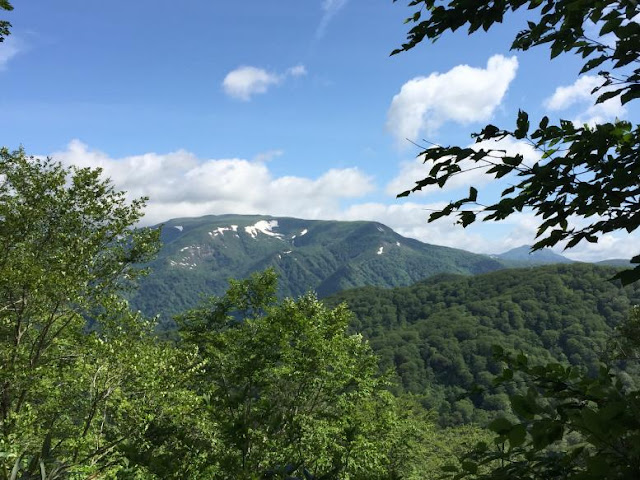 We can go genryu fishing even if there is no zenmai-michi or foot paths. It must be bit harder to approach to core genryu areas but we can continue genryu fishing anyway. Rather, there will be aspects that it would be a happy situation for fish if there are fewer anglers.However, it is a pity that the culture of the mountain people that have been continued since more than 1000 year ago may be lost. When I was walking zenmai-michi on going and returning of genryu fishing in the deep mountains, I often met mountain people who had full of sansai in the shoulder basket in the spring or may be full of mushrooms in the autumn. "Fishing? Did you catch a lot of Iwana?" They always greeted me with friendly smiles. We talked a little and said goodbye. That was it, but to lose such meetings with those mountain people is most sad thing for me more than anything.