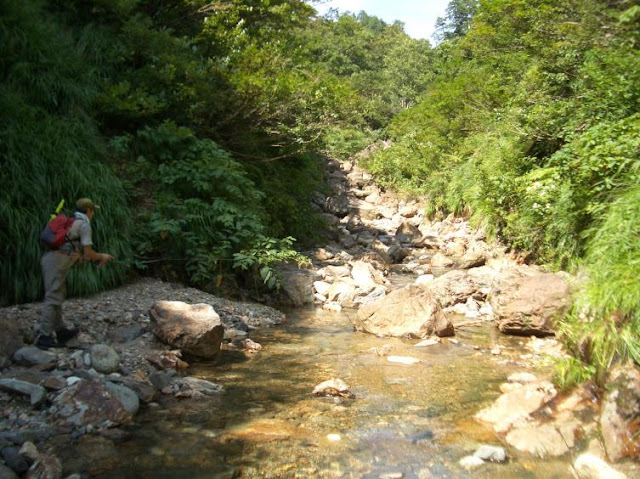 If you do keiryu fishing or genryu fishing in Japan for a long time, you might hear the word of “Kakushi-zawa or Kakushi-dani”. Sometimes, you might find those words in the sentences of fishing literatures or fishing writings. The meanings of the words are Kakushi-zawa = Hidden stream and Kakushi-dani = Hidden valley. Both mean the hidden stream where full of iwana live and only one person or very few people know the existence of the stream. Yes, it is a secret stream of the paradise of iwana. 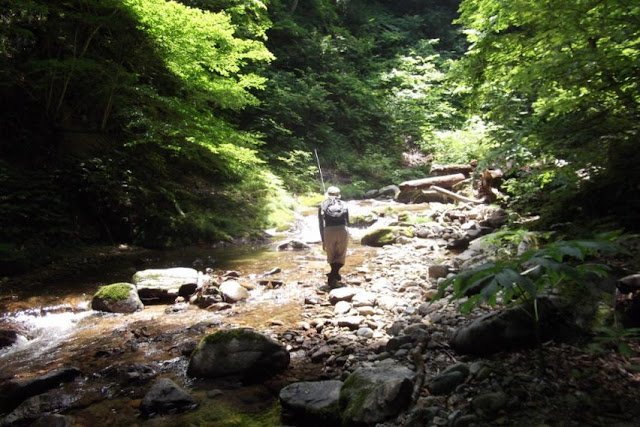 For instance, there is a small branch stream that has very few water at the confluence to the main stream and you have no doubt there are no fish living, but if you wade up-stream for some hundred meters, the amount of water rise more and more and it becomes a nice stream, then you see some iwana swimming and there becomes full of iwana back of the stream. Or there is a tributary coming into the main stream as a small but high waterfall. You never expect there is fish up-stream of the waterfall because the waterfall is so high and water is not so much, but actually there are bunch of iwana living up-stream of the waterfall. There are such places rarely exist absolutely in the back of the stream, which we think there have to be no fish.

I posted about “Sakanadome (Uodome) Waterfall” before. It is about the waterfall which stops fish run, but we rarely see iwana upon the waterfall. The causes of these phenomena might be change in terrain caused by natural phenomena can be thought. For instance, emergence of waterfall due to big earthquake or swollen by heavy rain divides the living area of iwana, but another cause of this kind of phenomenon is by transplantation released. I think this is more common reason of the phenomenon in Japan. Yes, transplantation releases have been done since long time ago.

In comparison with big countries like USA or Russia, Japan is a small country, so that we could go everywhere in our land even it was far deep in the mountains and made our lives. We have very long history, and more than 1000 years ago quite a few people went into the forests and mountains to make their lives. For instance, group of hunters who were called “Matagi”, mountain village people who harvested zenmai and other mountain plants, Kijishi (woodworkers). Those people stayed in the mountains for some weeks and caught iwana or yamame as important protein source. As they went deeper in the mountains, they transplantation released iwana to far more upstream where iwana did not live originally. This act had been done for long time, and we still now can see iwana in the very upper part of the stream. I guess this is quite different situation from USA, Canada or Russia.

I must say those Matagi people or mountain village people were also part time professional fishermen mainly in the summer time, and some of them did transplantation release to make their secret fisheries. This kind of transplantation release act is still done by a few genryu fishers. A friend of mine is doing this and has some secret streams. Yes, it is “Kakushi-zawa”. 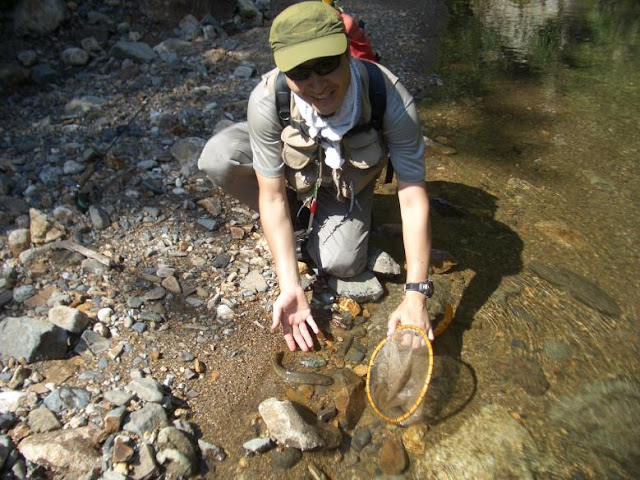 The most important thing when we do this transplantation release is we have to catch iwana just lower part of the same stream. We must not bring iwana from different river or never to release cultured iwana. We have to strictly refrain from the act to break the native ecosystems.

Anyway if you release 4 or 5 couples of iwana onto the waterfall or to the back of the stream and if living environment is suitable for them, there will be full of iwana in 4 or 5 years later. Those places are where fishers never expect fish, so the place should be safe from anglers and exist for a long time.

It was some time ago, I was invited by another friend of mine for fishing in the mountain stream near his hometown. I accepted his invitation and went for a 1 night camp fishing with him. It was about the beginning of August, and the stream was located near-by his hometown. As we can approach the stream by car, the stream had been fished by many anglers by that time. I knew fish were nervous and it was the hardest time for fishing. I thought it is OK if I could fish some iwana and enjoy camping.

In the early morning of 1st day, I met him near the stream and went into the forest road along the stream by my car. It was my first time to visit that stream, and it was quite big stream and very clear water was flowing in the beautiful valley. I was excited to fish that stream, but he said we would fish in one branch stream. I had no reason to refuse it, so I agreed with his idea. We stopped the car near the confluence of the tributary and we prepared for fishing.

We went down to the stream, but it was a small and bit dark stream. We walked and cast one by one, but no fish could be seen for 20 or 30 minutes. Besides the stream was gradually getting steeper and steeper and wading was getting harder. For another 30 minutes we climbed some waterfalls and carry on hard wading, but there was a 30m waterfall in a deep gorge was blocked our way finally. I thought it was time to go back, but a friend of mine asked me if we could climb the gorge. I said OK and we climbed the cliff beside the waterfall and cleared the waterfall acrobatically. It was the place I never get through alone or I did not get through with other friends. I am sure everyone would return to downstream at the waterfall because the place is too hard to go through and fishing was very bad in the stream. 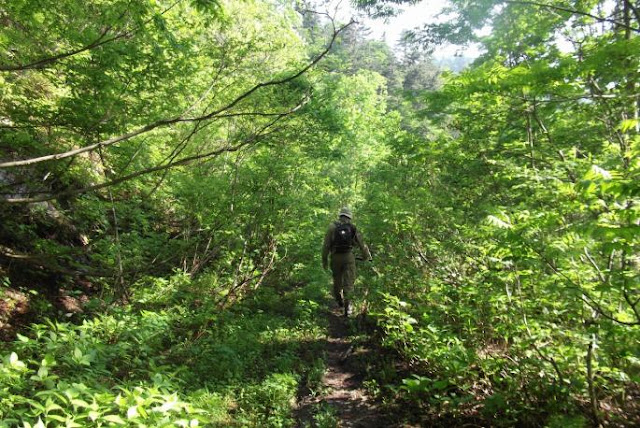 As we walked for about 10 minutes from the waterfall, the stream became very flat and calm. There was nice small pool at the vent of the stream. I set my rod and cast a fly, then iwana bit at the first cast. It was beautiful iwana sized about 27cm. From there good conditioned iwana from 25cm to 30cm attacked our flies nearly at every good point. We enjoyed fighting with iwana very much.
When I noticed, views around us had become bright and calm. I felt that the scenery must look much more beautiful if we catch fish well. Looking at my friend casting the fly upstream, I certainly realized that this place is his “Kakushi-zawa”. 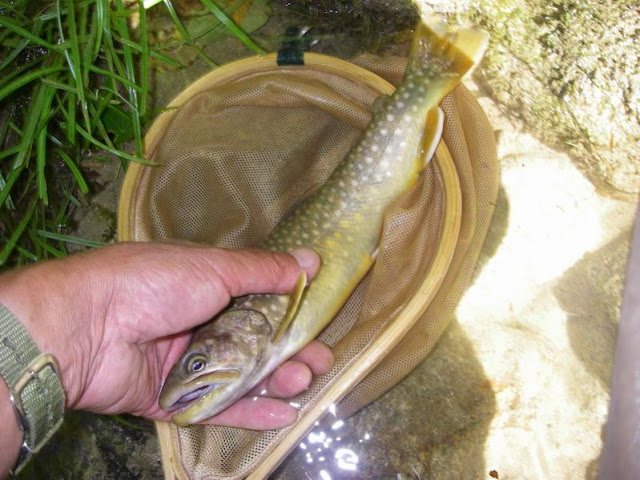 We ate lunch by the stream in the sun after happy enough fishing. I said “It is hard again to go back through that gorge.” He said “Yes, but there is a hidden trail upon the cliff. We shall take that trail to go back.” I thought we should have taken that trail to come over here and wanted to say why he did not tell me about it. I thought it is true “Kakushi-zawa” is not the place we can reach easily. 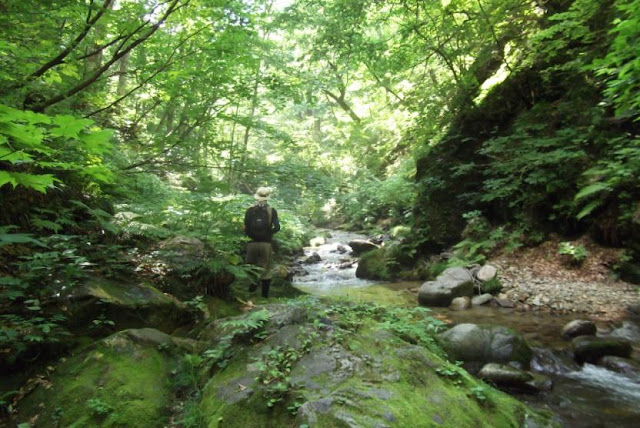