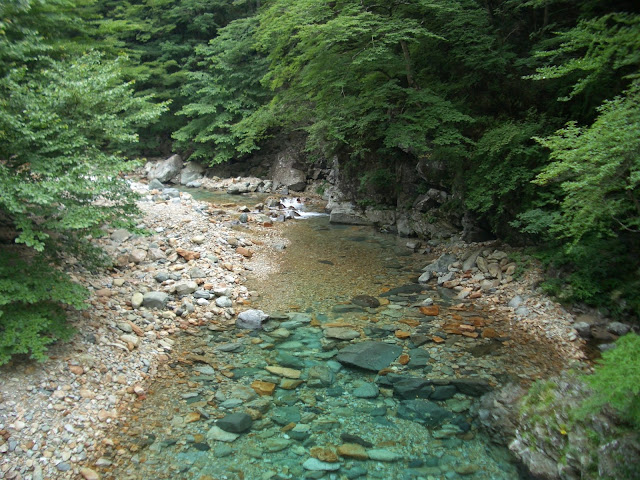 Driving a car from the town where I live to the west for about two hours, there is a river named Ohsabi-gawa (Ohsabi-river) that flows from the mountains that continue to the south from Nasu mountain ranges. Its genryu area is still close to towns and villages where people live relatively. It is a genryu that can be easily approached, but the beauty of that genryu area is said to be the best in Kanto region. From the nearest village it only takes about 10 minutes to enter the dirt forest way entrance, and if we drive a car around a mountain for about 15 minutes, the scenery around there shows the aspect of deep mountain valley at once. The river is flowing far far below the steep cliffs in deep rich forests. So, we can only hear the sound of the river faintly on the forest road.

And above all, the beauty of the Ohsabi-gawa's water color is noteworthy. Normally, in the mountain streams of Japan, it shows the color of emerald green in the pools and deep flow parts. But, the color of the water in the genryu area of Ohsabi-gawa shines in a wonderfully beautiful cobalt blue. It is said that it is the influence of minerals contained in hot spring water springing in the head of the source. We genryu fishers called it “Ohsabi Blue” to honor its beauty. Even with those points, this Ohsabi-gawa is a river with enough charm to introduce to you, but there is another reason to make this Ohsabi-gawa famous more.

I wrote in this essay that "In Japan the fish living most upstream of the river is Iwana, no fish live upstream from Iwana." I think that it was certainly the episode of "Iwana". However, there are some exceptions, one of which is this Ohsabi-gawa. It is the fact that many rainbow trout were inhabited over the upstream of the habitat of Iwana, in the most upper part of Ohsabi-gawa. Those rainbow trout were also introduced in the articles of fishing magazines long time ago, and I heard from Mr. Sebata, saying that there were many rainbow trout in the stream and the large rainbow trout of 50cm to 60cm bent the fishing rods bigger.

Well, why did such a thing happen? It was because the Japanese fisheries experimental station had been released those rainbow trout to Ohsabi-gawa experimentally to test if American trout could live in genryu area of rivers in Japan. It was said that they discharged rainbow trout several times upstream of Otaki (Big Watefall) which was a run-up stop for Iwana at that time. The result was a huge success, and rainbow trout was said to have expanded their habitat considerably deep into the genryu area after that. It is about the beginning of the Showa era, that is more than 90 years ago from now. At that time the food situation in Japan was still bad, and rainbow trout was imported as the new food from the United States under such circumstances.

Unfortunately, now we are unable to see a group of rainbow trout swimming in the source of Okawa. This is because someone released Iwana from down-stream of the waterfall to the habitat of this rainbow trout 20 or 30 years ago. Afterthat, Iwana won the inhabitation competition with rainbow trout and now it is hard to see the appearance of rainbow trout in the genryu area. In recent years, not only fish but also various organisms raise problems of alien species, but it seemed that Iwana of native species of Japan was stronger than rainbow trout in this case.

Even now, rainbow trout is often released to the rivers and lakes here in Japan, but mostly it is done in the sections such as the catch & release areas, and many fish are poorly conditioned and many do not have natural mating power. Nevertheless, there are some places where rainbow trout, which were released in some rivers in Hokkaido and Honshu, are breeding naturally. Actually, even in this Ohsabi-gawa, we can meet descendants of rainbow trout that continues from the long time ago. It is only a little, but if you go to the most upper part of genryu section beyond a series of waterfalls walking several hours from the entrance point of the genryu. Yes, we are still able to encounter rainbow trout who are alive in that isolated area. 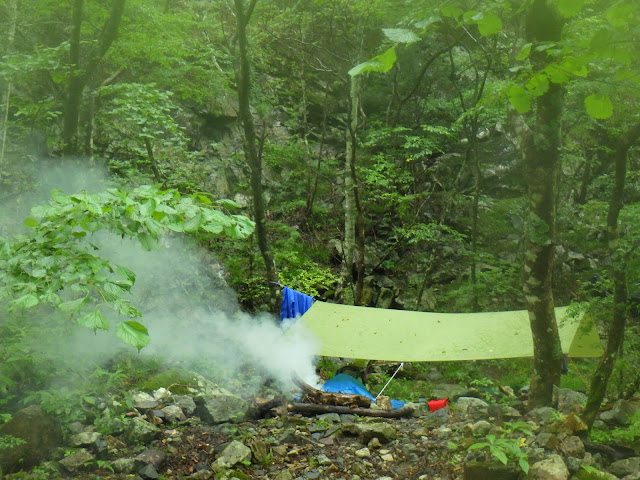 In the summer of 2018, I went to Ohsabi-gawa to see those rainbow trout with my genryu fishing friends Takano-san and Fuku-chan for 2 nights. Actually, I had gon fishing in Ohsabi-gawa 5 or 6 times so far, but I had never caught rainbow trout at all. Once, I walked to a considerable genryu section and stayed for a night and fished, but it seemed that I had not reached to the habitat of the rainbow trout. This time, we gathered at parking palce at the end of the forest road and stayed for a night. We got down to the river as soon as the next morning walking for about an hour and a half. We set up a temba (camp) where we walked the river about 30 minutes from the entrance point. We walked to the most genryu area soon taking only fishing equipment and lunch. On the way, we did not do any fishing. We left the temba at 9 o'clock and arrived at the place which seemed to be the habitat of rainbow trout at around 11:30. 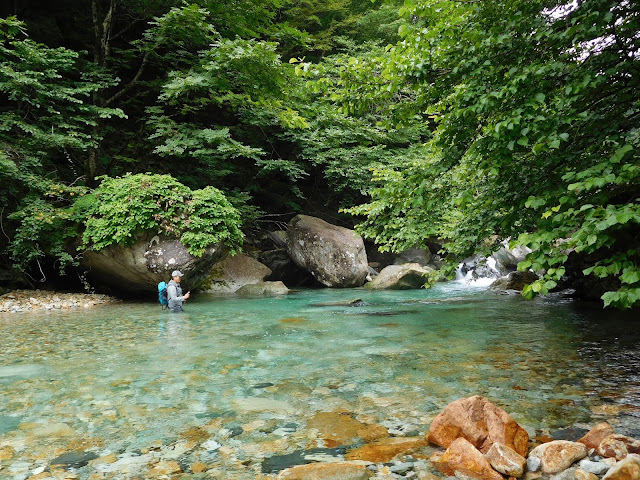 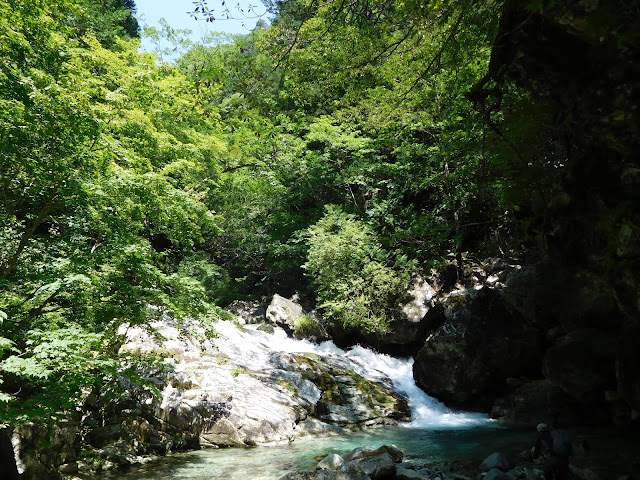 Following them, I also took out my fishing rod. They gave me a first-class point with a deep flow under a small waterfall of about 1 meter. I cast the fly just under the waterfall and letting it drift natural about 2m, then fish came out immediately. When hooked him up, the next moment the big fish jumped. A typical rainbow trout fight pattern. I enjoyed his powerful pull. After a wonderful fight, I landed a rainbow trout that was a little smaller than 30cm. 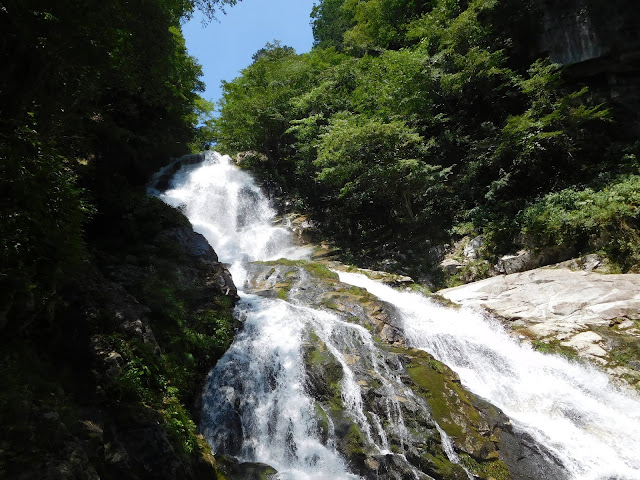 While I was taking pictures of the fish which I normally do not take, I suddenly got a feeling "this rainbow trout was living his life in that isolated genryu area connecting the life from ancestors released to Ohsabi-gawa almost 100 years ago." Then he looked like a very precious thing like a jewel to me. Yes, I thought he was the jewel of genryu, and although rainbow trout is not a native fish of Japan, I really wanted them and their descendants to stay alive in this genryu area of Ohsabi-gawa forever. 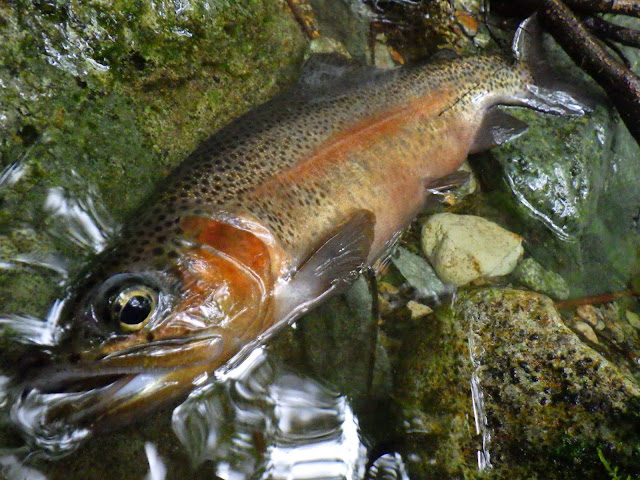