Ezoharu Zemi is a small cicada with a male body length of about 3 cm. In our main genryu fishing field Tohoku region, they occur in the broadleaf forest such as beech from late May to July. In Japanese, Ezo means Hokkaido and Haru means spring, so the meaning of the name of Ezoharu-zemi is “a cicada telling the spring to the north country”. What a fascinating name it is. The Ezoharu-zemi’s echoing in the forest tells us the arrival of a full-fledged genryu fishing season. In such a season early June we go on the first genryu fishing trip of the year. 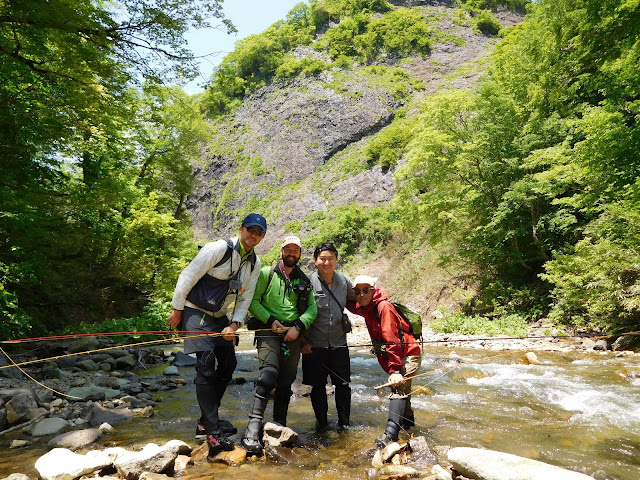 This year, we went on a genryu trip to North-Tohoku, Iwate, on a group of 6 people. Our normal size of the group for a genryu fishing trip is 3 or 4 people, but this time we had 3 new friends joining in the group. One guy was Go Ishii (Go-chan). I met him about 2 years ago on a short genryu trip that we went with 2 American friends. We often saw from that trip and Go-chan wanted to join our genryu trip. Another guy was Uberto (Ubi-chan). He is an Italian who lives in Osaka. I got to know him when he came to the event with Yuzo Sebata last year. Last guy was Matsuzawa-san. He is a friend of Tsurumi-san (Tsuru-chan, my best genryu friend) from the school days. 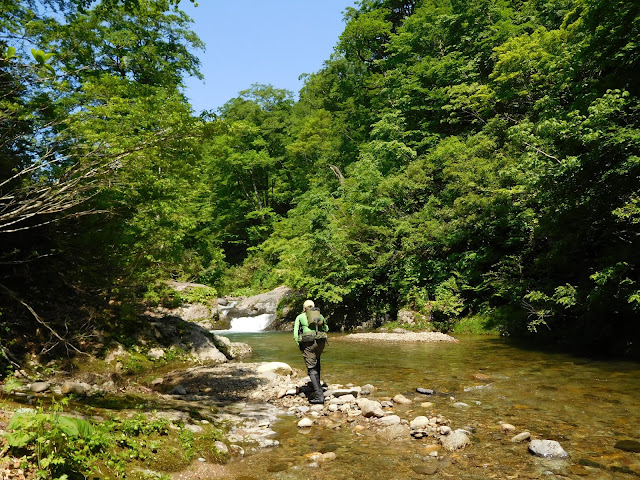 At 21:00 on Thursday, we gathered at Shin-shirakawa station in Fukushima where we always meet and parked some cars at near -by parking, then we headed to north on Tohoku motorway to Iwate. We got off the motorway around mid-night and drove general road for about 30 minutes, then drove into a dirt forest road. In about 15 minutes we arrived at the end of the forest road. There was no car parked before us, and we felt a luck. The first day was rainy weather forecast until around noon, but fortunately it was not raining. We laid a blue-sheet and made a toast with beer celebrating a safe arrival into the mountain. Then we drunk about 1 hour while talking about each other 's current situation, and we had a nap for 2-3 hours until the morning.

In the morning, I woke up with the sound of rain that beat the roof of the car. It became steadily rain when it became bright. Okay, departure was unfortunately in the rain. We wore rain jackets and quickly packed the baggage. The departure was 6 o'clock, rain was strong, but today's over mountain course time is about three and a half hours. As we planned to pick up bamboo shoots and wild vegetables on the way, so I estimated that we would arrive at the tenba (campsite) in around 4 hours.

Ten minutes after we started walking out, the mountain climbing trail became very steep. Matsuzawa-san and Go-chan seemed to suffer for climbing over the mountain as it was their first time. Ubi-chan carried 20 kg of luggage, but he continued to climb further with young Italian power. I also became feeling little sick because of lack of sleep and chilling due to rain. I climbed a steep climb in about 20 minutes with slower pace than usual. Then there was a huge snow bridge laying over the route. This year the snow bridge looked much bigger than usual year. I thought there should be more and bigger snow bridges in genryu area.

We had a rest after climbed over the snow bridge, but there was bit windy and rain was still strong. We thought we should not stay there for a long time because We worried about getting cold out of our body. So we continue walking through the pass and arrived at nemagaritake-bush where we planned to harvest nemagaritake(bamboo shoots). We decided on 15 minutes harvest time, and we were divided apart. There seemed to be few people who came here for bamboo shoots this year, and enough amount of bamboo shoots could be harvested in 15 minutes.

Soon after we arrived at the peak of the mountain after harvesting nemagaritake, but all the wonderful scenery was in the fog. Well, raining started to fall little by little when we started going down to the target river. By that time, our body got used to walking and earned a good distance. When we went down the mountain path, we arrived at the first small stream. From there to the mainstream we walked while harvesting wild vegetables such as koshiabura, Taranome and udo. Trails had no footsteps of predecessors, probably we thought we were the first anglers this year and fishing would be great.

We arrived at the tenba (camp-site) around 10 o'clock. It was a wide, flat 5-star tenba on a river terrace that we could overlook the river. I felt happy thinking that we could enjoy a good camping and good fishing for two days. Tsuru-chan and Ubi-chan set up the rope for tarps quickly. Then everyone worked keenly to set two tarps and spread blue sheets under the tarp, we got a completion of a comfortable river house. I took off my wet clothes and put dry clothes on. My body got warmed and I finally got comfortable. We had light lunch before the noon, and as it was still raining a little, I took a nap under the tarp. It was the time of bliss.

The rain stopped before 14:00 and the little muddy flow in front of the camp site became clear little by little. When a quick minded Hama-chan and Ubi-chan started casting a rod alternately in front of tenba, Hama-chan caught a good Iwana of about 27cm in a while. The weather forecast said it would sunny forecast for next 2 days. Our main fishing day would be 2nd day. We planned to fish and wade the mainstream altogether up to one big tributary and split into 2 groups from there.

Early in the evening we made a bonfire and started drinking while preparing dinner. The menu of the day was Hama-chan’s Tempura of wild vegetables, Go-chan's Grilled hormone and Tsuru-chan’s pork miso soup. The bamboo shoots burned with bonfire was also excellent appetizer. Our cold bodies were warmed up from the core with grand bonfire and hot pork miso soup. We enjoyed drinking until 9 o'clock and slept in sleeping bags. When I awoke in the midnight, I saw a bright big moon from among the trees. I fell asleep again praying for nice weather for the next day.

I woke up after 6:00 in the morning. The sun was already rising, and a wonderful blue sky was spreading. Some of the members were already awake and a bonfire was buring to prepare breakfast. Ubi-chan made pastas of tomato sauce. This was the best pasta we ever ate in genryu. It was very cold when I touched the river water to wash the dishes. So I felt that it was better to start fishing after the sun would be high in the sky.

Hama-chan had a rod and headed upstream at 7:30. At 8:15 the sun has risen high in the sky, and Ezoharu-zemi started shrilling in the forest. Temperatures also got higher, we got ready and walked upstream at around 8:30. Hama-chan was fishing slowly waiting for us, so we caught up with Hama-chan in about ten minutes. Because the water temperature is still low, the activity of the fish was not high, but Hama-chan, Tsuru-chan and Ubi-chan fished nice size Iwana.

We reached the main part of mainstream around 10:30. The temperature has risen high and the activity of the fish also got higher at once. The stream started to have some run-off, but it was not the level to affect fishing. We fished Iwana fairly and reached the confluence point with the tributary around noon. We had lunch by the river. Then the sunlight was already very hot.

We had been divided apart after the lunch. Go-chan returned to tenba. Hama-chan, Ubi-chan and Matsuzawa-san went into the tributary. Tsuru-chan and I headed to upper part of main stream. Fishing was just great after that too, but We were blocked our way by the snow bridge to clog the valley. We checked the climbing route, but it was not easy. Time was also getting tight, so we decided to finish fishing and went back to down-stream. Collecting Nemagaritake on a way back, we arrived at tenba at 15:00. Go-chan was gathering firewood. Hama-chan group returned about 1 hour later. They said they had excellent fishing in the tributary too. “I have been fishing a lot since I came to Japan, but today’s fishing was just like another world. So great. I have never had fishing like today.” Ubi-chan said smiling.

It was fine weather on that day, so we made a bonfire just beside the river and began preparing dinner. The menu of the day was my miso-soup of bamboo shoots, Ubi-chan’s spaghetti Ario Orio Peperoncino Anchovy, Hama-chan's Iwana with marinated kelp, yesterday's remaining hormone grill. Then we grilled 6 Iwana for the souvenirs for Tsuru-chan and Ubi-chan. We call this unseasoned grill way “Shirayaki”. We make Shirayaki when we would like to keep Iwana for several days. Knack of Grilling Shirayaki Iwana is to grill slowly over long hours with a far-fire. On the second night in the genryu everyone got back physical strength and had the best time. We talked about fishing, about mountains, about memories of a young age. Many topics came out from one to the next, a party with laughter continued late into the night.

The morning of the last day also started under fine weather. We enjoyed a slow breakfast surrounding the bonfire. Matsuzawa-san's Harusame-don(Vermicelli rice) with Nemagaritake shoots was so good. We cleaned tenba and the bonfire just like we came before, and we left tenba around 9:00. A long climbing continued to the peak on the return trip, but as our bodies got used to for two days in the mountain we all climbed at a good pace. Early summer sun shined strongly, but hardwood forest blocked the heat. From the peak we were able to fully enjoy the beautiful scenery of the mountains of the Ohu Mountain Ranges.

In this fishing trip, we got new genryu friends as Go-chan, Ubi-chan and Matsuzawa-san. Hard climbing over the mountain in the cold rain on the first day, a heavenly fishing under the beautiful blue sky surrounded by green forest, drinking good sake by the bonfire, all things seemed better than usual because we had them. Go-chan and Ubi-chan said they would participate in the fishing trip next month again. Matsuzawa-san promised resumption. Thus, a full-fledged genryu season started up this year. While I was thinking those things, we got close to the Parking place. We were slowly walking down the trail in the forest where Ezoharu-zemi’s shrilling was echoing.