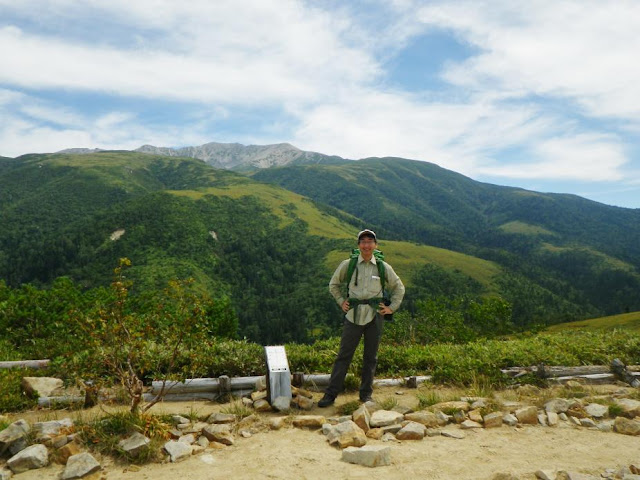 There was a mountain stream that I had been longing to fish since I started mountain stream fishing. It was “Kurobe River”. Especially the genryu part of Kurobe River is known as the highest mountain stream in Japan where iwana live. Unfortunately the lower part of Kurobe River was divided by the huge dam called Kurobe Dam, which was constructed in 1950s to cover the chronic electric power shortages of Japan after the Second World War, but the most upper part of the stream and some famous tributaries like Kitamata-dan or Yanagimata-dan have kept the original landscapes from ancient times.

Kurobe-Genryu is surrounded by 3000m class mountains that are called North-Alps (or Japan Alps). Elevation of the water source of Kurobe River is 2924m. Length of the river is 85km. 80% of the river flows through the deep valleys called Kurobe gorge. Once those areas were places where only limited mountain people could enter. Kurobe-Genryu and its tributaries were called “Paradise of Iwana” in those days. Nowadays with the development of mountaineering culture, Kurobe has become a popular destination among alpinists, sawanobori people and even tourists, but still Kurobe-Genryu or some tributaries like Kitamata-dan, Yanagimata-dan are dream places for fishers, but those places are not easy to visit. 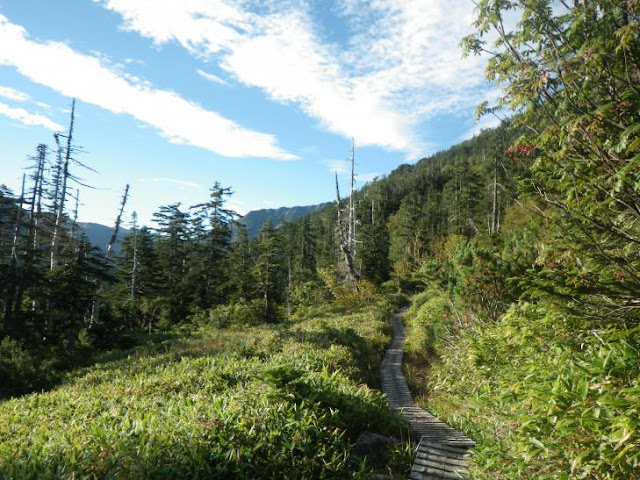 The vast forests surrounding Kurobe-Genryu are the forest of conifers such as Kurobe (Japanese arborvitae) or Abies trees, and it gives me a very different impression comparison with my familiar sceneries of Tohoku area’s forests of broadleaf trees. A friend of mine told me that iwana in Kurobe-Genryu are living up to 2,600m. That fact captured my heart at once. Every time I saw the TV program about Kurobe or articles of Kurobe in fishing magazines, I felt I had to go to Kurobe someday.

The grand route of Kurobe-Genryu is to start wading and fishing from the back-water of Kurobe Dam to the river source, but it takes 6 or 7 days to end up the tour. I think ordinary Japanese people can not take such a long holiday easily, but there is kind of short-cut, if we fish only the most upper part of Kueobe Genryu. It is to climb over the mountains from Toyama prefecture side to the genryu area of Kurobe River. Based on the Yakushizawa-hut we can fish Kurobe-Genryu in two nights for three days at earliest. It is about 1,000m climbing from Oritate starting point of the trail to Tarobei-daira Pass, then 400m down-hill to Yakushizawa-goya.

Beginning of last September, we were planning to go for a 3 days fishing trip to genryu part of Miomote River in Tohoku, but due to the typhoon hit Tohoku and my friend’s physical condition, we had to cancel the trip 5 days before the departure day. So I decided to challenge Kurobe-Genryu alone. As it is solo genryu fishing, Kurobe-Genryu was very good for me because there are trails developed and fishing staying at mountain hut was safe in some respects.

On Thursday evening, I had dinner early and left home for Kurobe. It took me about 5 hours to the nearest motorway exit for Kurobe. Then driving a general road for about 30 minutes, I arrived at the gate of the toll forest road to Oritate, which was closed during night time. It was about 1:00 am. I was the first person and soon later 2nd guy arrived and parked the car behind me. I said hello to him and noticed he was from Hiroshima by his car number plate. He was going to Kurobe for climbing and onsen. We had a small talk for a while and went back to the car to sleep. I slept in a full-flat back cargo-space of my car. It was bit hot night and I did not need sleeping bag.

6:00 in the morning I drove through the gate and head towered Oritate. I could only sleep for 2 hours on that night and felt bit sleepy. I thought climbing up-hill would be very tough. After 30 minutes driving I arrived at Oritate. Fortunately there were few parking space open near the trail gate. I changed the cloths and wore rubber sole wading shoes because of the trail walking. Then checked the packing and had quick breakfast. While I was preparing and eating, many climbers were walking into the trail. I did stretch carefully and carried the backpack. It was about 7:00.

Soon later I began to climb the mountain trail, I became out of breath and sweated by the steep up-hill. For some while the forest was the mixture of broad-leaved trees and needle-leaved trees. As I climbed higher, it has changed to the forest of coniferous trees such as Kurobe or other fir trees. When I passed triangulation point of 1869m, the trail became aslow ascent, and I could see the forest limit very close. Shortly the trail led me to the oceanic meadows. I could look over the spectacle view of Arimine Lake, Toyama-city and Toyama Bay. When l turned around, there was magnificent landscape of Tateyama-mountains including Tsurugi-dake (2999m). 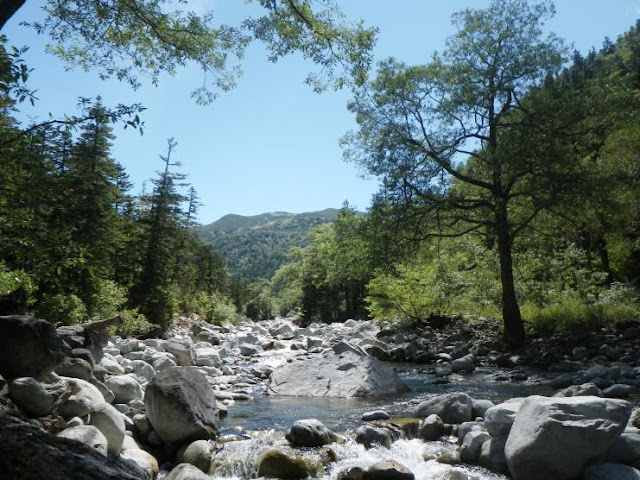 I arrived Tarobei-daira Pass around 11:00. I had lunch with 3 guys, I got to know on the way, at the open-air table in front of the mountain hut. The trail went down immediately from Tarobei-daira. After an hour walk I crossed the flow of the Yakushi-zawa, tributaries of Kurobe River. It looked I could fish Iwana already there. After the long walk struggling with the luck of sleep, I arrived at Yakushizawa-goya (Yakushizawa-hut) by 14:30. The small hut with red zinc roof was standing on the hill by the confluence of KurobeRiver and Yakushi-zawa. From the front terrace of the hut we could overlook the beautiful emerald green pool of Kurobe River. When I was resting in the terrace after checking in, I met one fly fisher who had been staying there from a day before. He was very friendly man and lectured me the conditions of Kurobe River very in details. It seemed there were only us fishing in Kurobe-Genryu on the next day. So I decided to go to the upper part of Kurobe-Genryu as I wished. 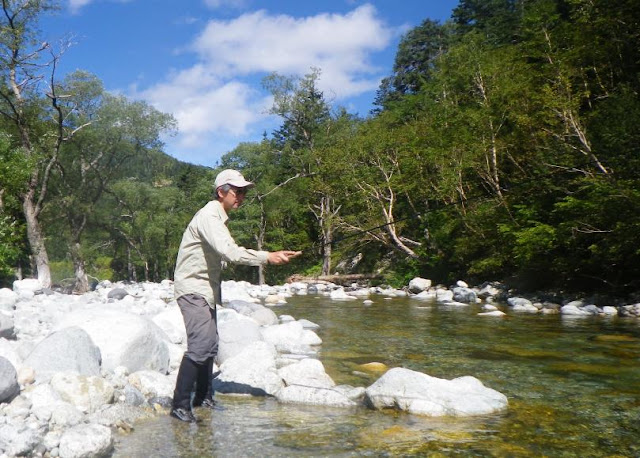 I went to my sleeping space. Fortunately I had spaces for 2 persons. I pulled the staff and gear from the backpack and prepared for fishing, because I still had a couple of hours before the dinner. I wanted to say hello to Kurobe Iwana. The first cast of fishing in the Kurobe River, which was a long-sought of mine, was in the big pool near by the hut. I had some bites of iwana but they looked too shay. So I walked up-stream for about 50m. There was good looking deep current by the right bank. I fished 3 iwana including about 25cm good one. I stopped fishing then because I was so tired. I went back to the hut and had very early mountain hut dinner at 17:00. The dinner was very good thinking the location of the hut. I had some drink and talked with some people staying at the hut. There was that friendly fly fisher too. This was what I do not experience at my ordinary genryu fishing trip, and I liked that very much. I was comfortably mellowing and went to bed before 21:00. 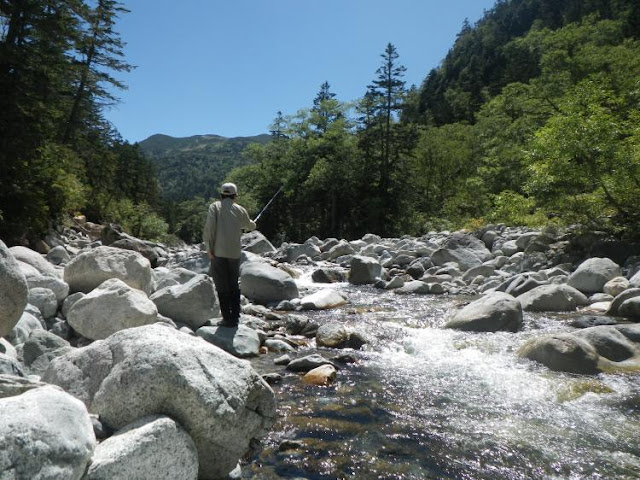 The morning of the hut was early. I woke up at 5:00 and had breakfast at 5:30. There were some parties already departing from the hut. There is very famous and beautiful tributary stream called “Akagi-Zawa” about 1 hour walking up-stream from the hut. There were several groups heading to Akagi-Zawa in that morning. I thought fishing must have been tough up to Akagi-Zawa. I was also taught that iwana in Kurobe Genryu were less active until 10:00 am because of the cold water. So I took it easy at the hut and went for fishing about 7:30 with one group of sawanobori people.

Still the sun did not reach to the bottom of the valley, and the Kurobe River was quietly flowing. However, the upstream there were majestic Kurobe mountains standing under cloudless blue sky. I felt as if that scenery was promising the good weather for that day. Mainstream of Kurobe River up to Akagi-sawa was a wide river. I was impressed by that volume of water, but wading was very easy. There were not any dangerous places at all. There was just one gorge that I have to pass by climbing the cliff of the bank but there was fine foot path. At the confluence of Akagi-Zawa I said good-bye to the sawanobori group and stepped into the Kurobe-Genryu. Kurobe River after Akagi-sawa was nicely gentle flow with beautiful white rocks. Above the banks were the picturesque forests of needle trees such as Kurobe, and that vast valley was surrounded by grand mountain range of Kurobe . The water was so clear and cold. I was suddenly thought that I was only fisher there in the genryu part of Kurobe River at that moment. I walked the stream to taste that amazing scenery and ice cold water of the river. 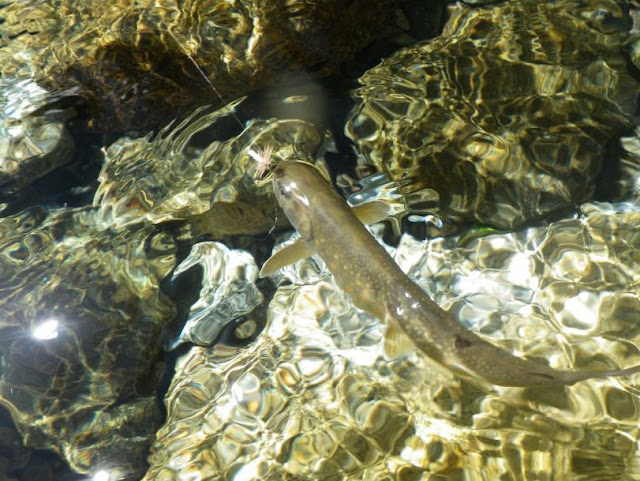 I cast the kebari in clear and cold flow. It was true. I did not have frequent bits of iwana before 9:00 am. So I walked and cast kebari onto the slow and sunny current, then I caught my first Kurobe Iwana sized about 27cm. That was good one. I took the photo for my first Kurobe Iwana. Those iwana are different subspecies from iwana living in Tohoku or my home river area. Kurobe iwana are called “Yamato-Iwana” and iwana in Tohoke or our area are called “Nikko Iwana”. I felt Yamato-Iwana were more like gray and plain than Nikko-Iwana. 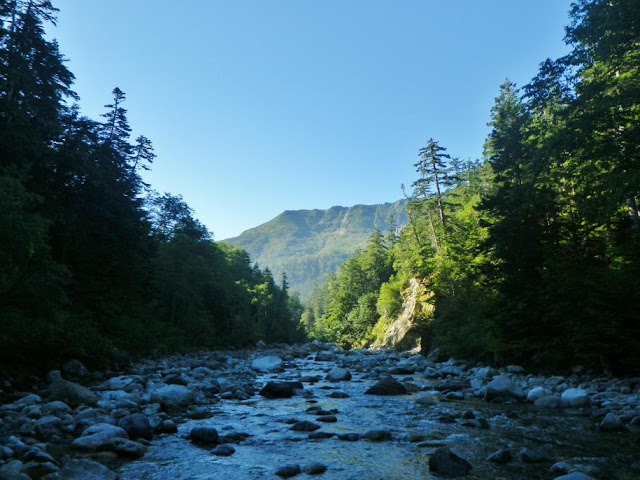 After 9:30 I was getting more bites, but soon there were 2 trekkers walking down the stream towers to me. I said hello and asked where they were walking from. They said they came down from Kumonotaira camp-site (2550m) through Jiji-zawa, which is one of tributaries. As it was about 30 minutes to the confluence I stopped fishing and walked to Jiji-zawa. Kurobe River became the flow with an altitude difference after passing Jiji-zawa. It looked like typical genryu stream. Time was just right for fishing and I had good reactions of iwana at every nice point of the stream. Kurobe iwana trained by strong flow of Kurobe River have very large fins, and their fight was great. I really enjoyed the fishing with nice over 27cm iwana for some while. When the mountains, that were towering in the distance in the morning, were then standing right in front of me, I put the fishing rod. I sit down on the river beach in a shade and boiled the water for lunch. 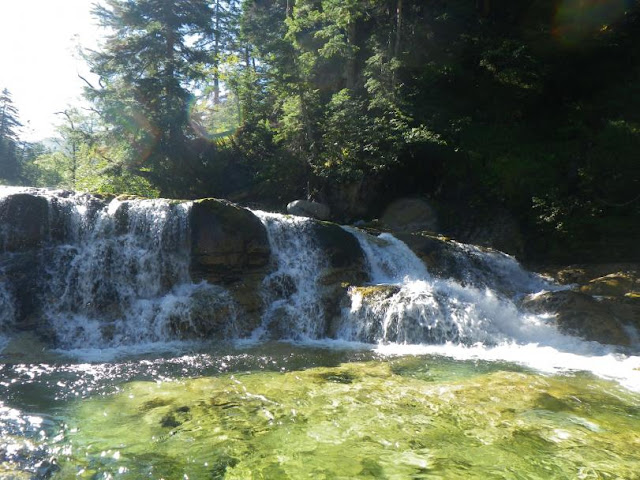 After having lunch, I was lying down on the beach and looked at the sky. There were slight clouds but sky was so blue and the sun was shining strongly. I had short nap in the leafy shade blown by the river breeze. I was truly satisfied. I enjoyed fishing sincerely after such a long time.

Return to the hut took me 2 hours and a half. When I stepped onto the terrace of the hut, the fisherman I spoke yesterday was waiting for me and said “How was your fishing today?” with very nice friendly smile. 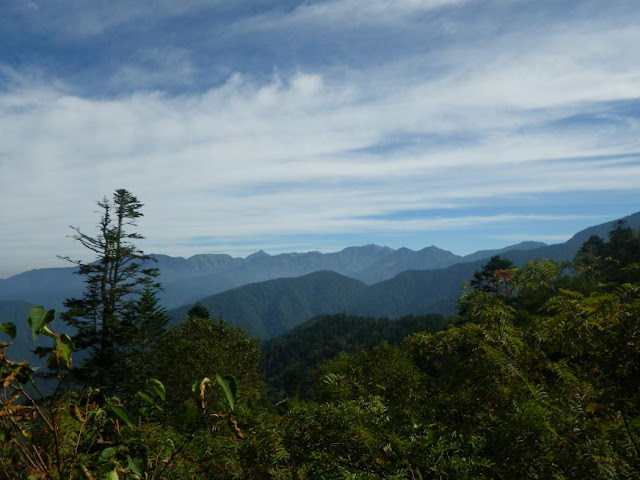