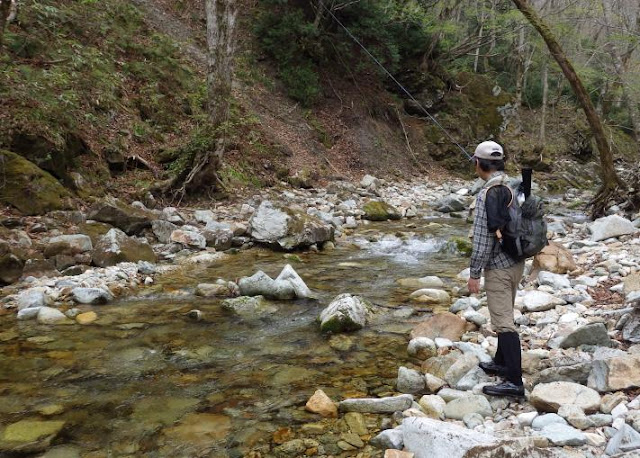 Naka-gawa (Naka-river) is a big river flowing through my home town Mito. The length of the river is about 150 km (It is a big river in Japan.) and the water origin of the river is in Mt. Nasu-dake (1,917m) in our neighbor prefecture Tochigi. Since Edo Period (17th century) Naka-gawa has been known as the southernmost river of Japan that wild salmon run-up. Also middle stretch is famous as the good Ayu fishing area, and there are many Ayu fishing anglers standing in Naka-gawa in the early summer. Views of the Ayu fishing is kind of summer feature for us. 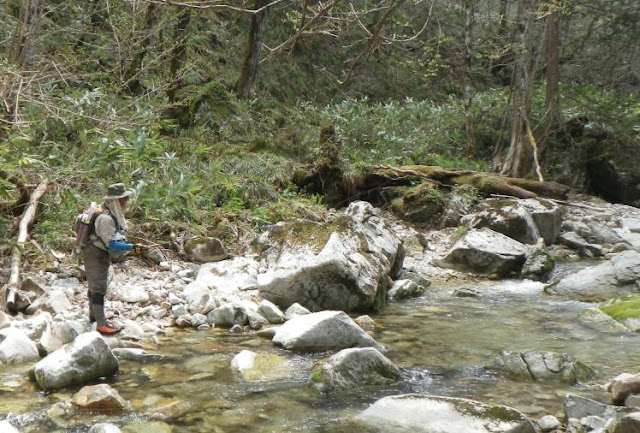 One thing very sad is there are dams in main stream and almost of the brach streams of Naka-gawa just like most of rivers in Japan. Anyway passing huge Miyama Dam we reach the end of car road and locally Naka-gawa changes its name to O-kawa. From this area is genryu part of Naka-gawa, and there are beautiful Mountains and forests surrounding the stream of gin-clear water. There are still large and useless sand control dams separating the stream but the valley and the stream are so beautiful and we may see good size Yamame swimming in the stream. 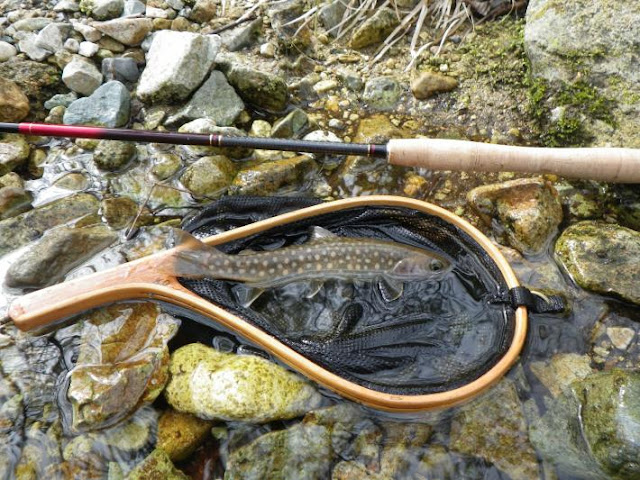 The genryu part of Naka-gawa is still close to the neighbor towns, and there have been many anglers fishing there by June or July, so fish are very nervous by the time. From locality majority of fishers are bait fishing anglers. So we prefer to do fishing in the most upper part of genryu where the stream is very shallow and bait fishing anglers do not like. So we normally walk for 1 hour and half from the car parking spot and start fishing. The elevation of the place is about 900m. The habitats of Yamame are already ended. Only Iwana is living in that upper part of the stream. In mid-May, trees are all luxuriant in the lower bound, but trees just started budding of fresh green here in the high mountains. So the sun light goes into the forests well, and it makes the valley very bright. This area of Honshu(Main land of Japan) does not have so much snow, so in this time of the year the river water level is almost normal. 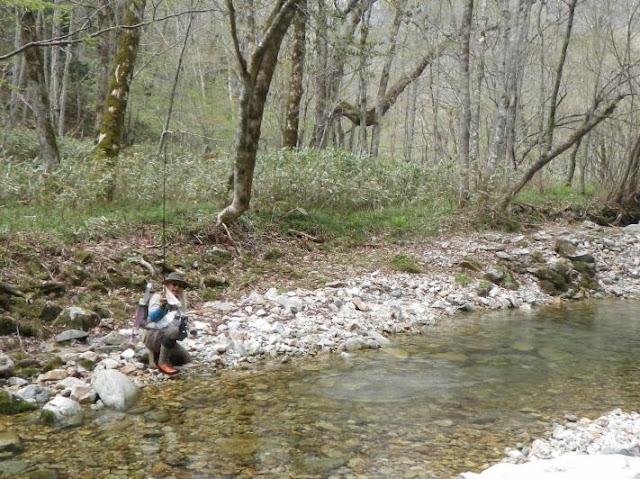 This year, I went to genryu part of Naka-gawa in May with one of my fishing friends. We arrived at the end of the car road near the back-water of the dam around 6:00 am. There were already 3 cars parked. We changed the cloths and put lunch and fishing tackles in our day-pack. The weather was cloudy but the sun came out from the clouds occasionally. We walked the mountain path along the stream. There are beautiful lilac flowers of Mountain azalea hanging from the cliffs. We met 2 parties of fishermen on the way. We told them that we were going far up-stream, and we walked.

After 1 hour and half walk, we got to the place and went down to the stream. We had short rest and prepared for fishing. I ceded the first cast to my friend. He did 2 or 3 cast on the non-descript riffle and fished good Iwana. I took a turn and cast at the nicely deep small pool. My kebari touched down on the water in the center of the pool and 2 or 3 seconds later Iwana bit my kebari. I enjoy good fight of Iwana and released him tenderly. We saw very few foot prints on the sandy riverbank. So we thought it must have been only a couple of parties fished the place in this season. Then many good Iwana bent our rods at nearly every nice point. We had to slow down the fishing. 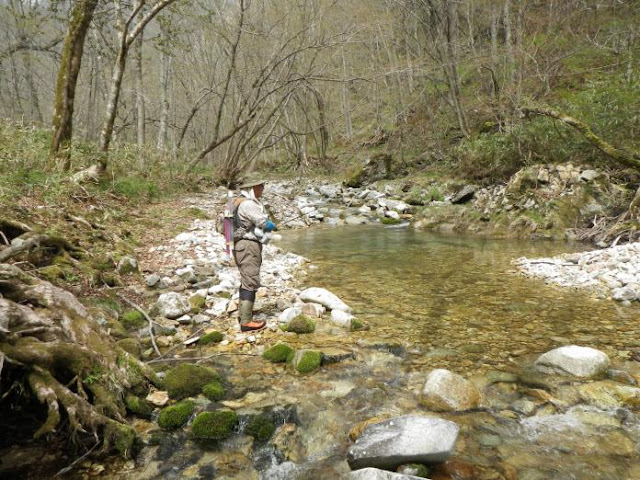 By noon the weather became very good and we got hot day finally. We finished fishing and had lunch at the nice looking river-side. We still have time for fishing but we are already satisfied. We folded the fishing rods and walked down the mountain path to the down-stream. We found some sansai(mountain plants), Kogomi and Aiko on the way. So we picked some as souvenir.

I was thinking while walking down the mountain path, my home river Nakagawa has been spoiled by the huge dam and many erosion control dams blocking the streams. I really think it is great disappointment, but there are still beautiful headwater streams barely left and Iwana and Yamame are living. I think it is still very grateful. I imagined how beautiful Naka-gawa was when there were no huge dams and the sand control dams. I suddenly wondered if salmon came back to this headwater area in those days.