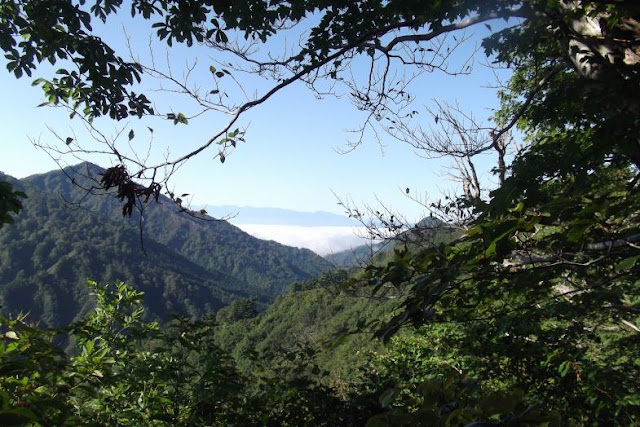 We go into the mountains deeper and deeper seeking for iwana, then we have unexpected meetings with wild animals, that we could not see in human dwelling areas. Sometimes it is an animal that we can hardly see in our ordinary life. Obviously it is an impressive moment, but on the other hand encounter with some animals is sometimes very dangerous. It is necessary to take prudent action, but as long as we keep a sufficiently safe distance, I think those encounters are very valuable and wonderful experiences.

At night, when we are driving a car on the mountain road approaching to the place we go into mountains, we often see wild rabbits, Japanese raccoons by the road, and if lucky, we can see flying squirrel in the light of car headlights. I once saw a fling squirrel somersaulted in front of the car and flew away. It was only one experience that I saw a fling squirrel. It was very impressive.

We rarely see wild boars or foxes in the same locations. Wild boars are very dangerous if we are walking and meet them in a short distance. They sometimes rush to us. One day in the evening driving a car I found a couple of baby wild boars by the road, so I dropped speed to see them. Then may be mother wild boar suddenly rushed between us and her babies and was running by the car. She finally jumped on the bank of the cut and run into the forest. She was protecting her babies. Surprising thing was her jump. She jumped about 1.5m or more. I never imagined that heavy looking animal could jump that high. 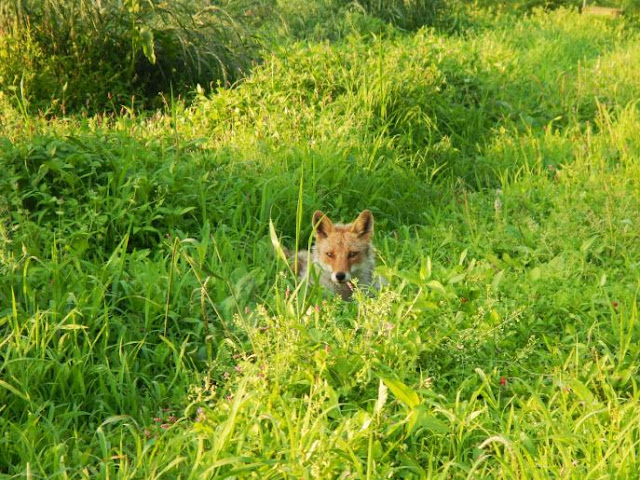 Very few times I met foxes. It was in a daytime. She was running across the road and disappeared into the grass field. I love foxes. They are very beautiful animals. We can see foxes quite easily in Hokkaido but in Honshu(Main Island) it is very difficult to see foxes, and it was only one time that I see a wild fox in Honshu. 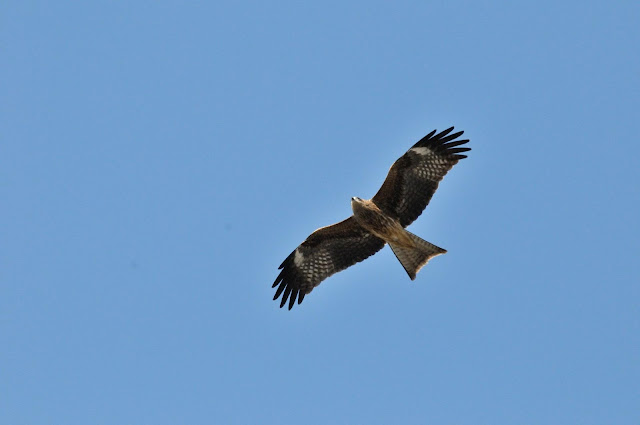 When we are climbing the mountain trail approaching to Genryu, we often find squirrels up on the trees. Often it is when we are having a rest and looking around scenery. May be we could find falcons or hawks such time. I like those raptores. They are very stylish and cool birds.

While we are doing fishing in Genryu or Keiryu, we see weasels or Japanese martens fairly infrequently by the river. One day, I was fishing alone in Keiryu, I met a marten. He appeared just 2 or 3m in front of me from the bush by the stream. He jumped to several rocks on the stream and dived in the stream and swam to the opposite shore of the stream. It was a very pleasing scene for me. 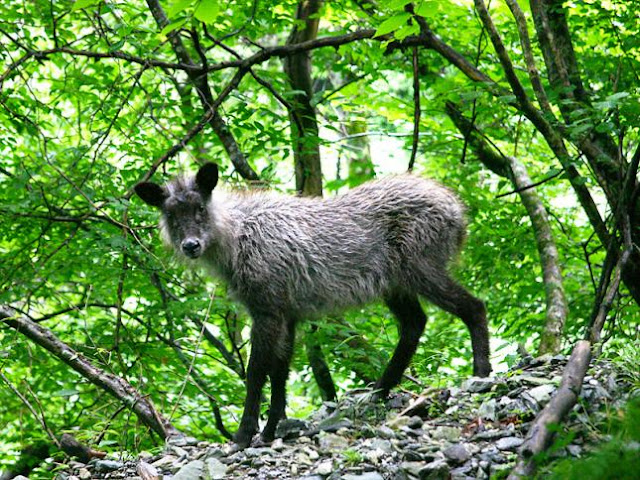 Japanese serow is the animal we often see in the mountains. They are protected animal by law and the population has been increasing. Adult serows are quite big and they look like bears when we see them from their back. Several times, I was frightened to see them in the mountains misunderstanding that they were bears. Basically they are gentle animal and if we stay still, they come very close to us. There are also Japanese deers, but I think we see more serows in Keiryu or Gneryu. Japanese deer’s cry is very plaintive. We get sad feeling hearing their cries especially at early evening in the setting sun. 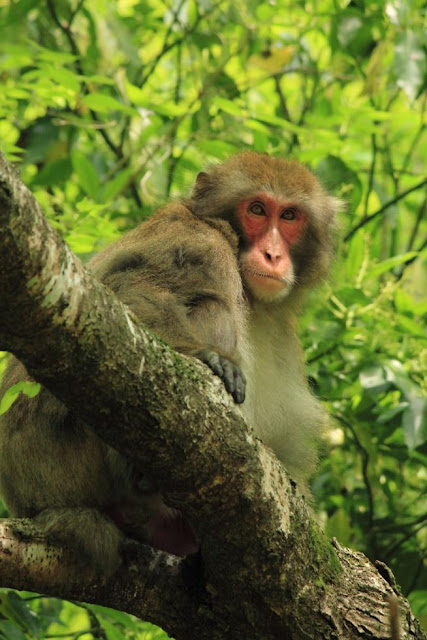 Japanese monkeys are always living in a group. We occasionally bump into monkeys driving a car on the mountain road or walking on the trails or even wading in the stream. Then look around them carefully, there must be more and more monkeys around them in the bush or on the trees. We have to be careful not to mess with them. They might attack us in a group. Someone told that if you throw stones, monkeys will throw stones back to you in under throw. I had one experience to meet one big group of monkeys when I was fishing in the stream alone. Firstly I saw 2 or 3 monkeys on the river-bank, but I had some bad feeling and looked around carefully I found may be 30 or 40 monkeys looking at me from the trees and banks of the stream. I immediately quitted fishing and waded upstream in the middle of the stream trying not see their eyes. They did not do anything to me but it was very scary experience.

Along the way, to talk about dangerous animals or insects, Japanese people first say about one snake called “Mamushi”. Mamushi is a small snake but they have very strong poison that we could end up with death. If you are ever bitten by a Mamushi, you have to get injection of serum as soon as possible. But Mamushi is generally gentle snkae. They never attack you, if you do not scare them. Also they say if you wear 3mm thick neoprene spats, Mamushi’s fangs do not penetrate it.

Next one is hornet. We sometimes see them or find their giant nest in the mountains. If you meet a hornet in the mountains or streams, just stay still lowering your body until he goes away. Dangerous thing is approaching their nest. You may get their attack and bitten. It can be fatal if you are bitten by many hornets, or if you have allergies, you may get anaphylaxis-shock. They say if you approach to their nest, firstly 2 or 3 patrol hornets come over and fly around you. If they make sound like “Kachi kachi kachi kachi.”, it is the last notice. After that attack hornets come to attack you in a group. When you meet those patrol hornets, you should leave there slowly back to the way you came. 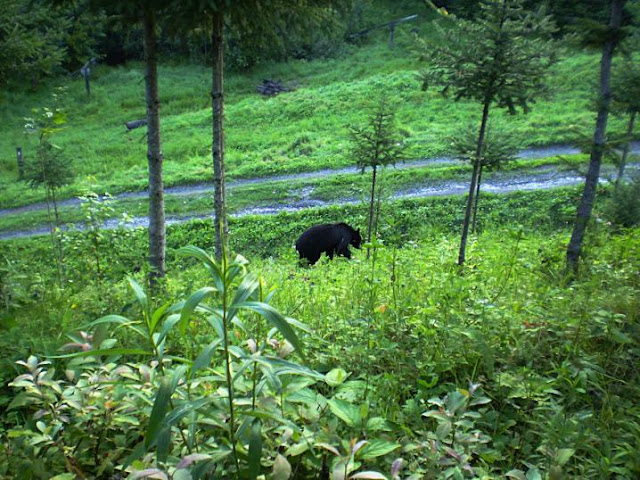 Now, the biggest animal you could meet in the mountains of Japan is a bear. There are 2 types of bears in Japan. In Hokkaido, there are brown bears. They are big bears and people say they are quite aggressive and dangerous. In our fishing field of Honshu(Main Island) there are black bears who is smaller than brown bears. Black bears are considered to gentle bears, but still they are the strongest animal in Honshu and we sometimes hear the incidents that some people were attacked by bears. Often incidents happen in the mountain village in the fall that mountain harvest is not good. We also have to take very much care if we see a mother bear with children. In spring, we rarely have incidents of bears when we are picking sansai(mountain plants), because it is the season that bears also look for foods in a same area. But again, as long as we keep right distance black bears are not so dangerous.

I have met bears for 3 or 4 times in the mountains, but I did not feel the danger. One time, I was walking down the forest road with 2 friends to find out the good point to go down to the stream, then we found one black bear walking toward to us. He was not looking us and did not notice us. Finally he came about 30 or 40m distance to us, so I talked to him with big voice “Hey we are here!”. Then he seemed to be a bit surprised, but climbed the hills and disappeared into the forest. We talked “He was very easygoing.”, but it was very touching scene for me.
Those are some wild animals that I met in the mountains. There are more wild animals in the mountains of Japan, from cute animals to dangerous animals. I think I could meet those animals because I have been doing Genryu fishing. Those were very valuable experience.

Genryu and mountains are the fields of wild life. When we go into the mountains, I would like to have the feeling that we bother them to their house, and I want to pay utmost respect to those wild animals.