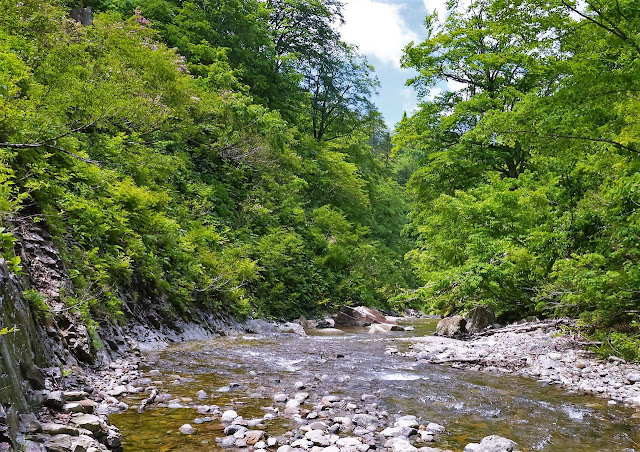 Mountain Streams Disappearing Into a Dam.

In the beginning of June, we went on our first genryu fishing trip to Kitanomata-zawa (Kitanomata Stream), a tributary of famous fishing river Naruse-gawa (Naruse River) located in south east of Akita prefecture. Naruse-gawa has many tributaries in its genryu part surrounded by beautiful 1200m class mountains and rich forests of beeches and Japanese oaks. Its mainstream begins from the shoulder of 1627m Mt. Kurikoma and flows north west to Sea of Japan. Upper part of Naruse-gawa has several good mountain streams for fishing spread in a fan shape. The area looks typical mountain nature of Tohoku region. 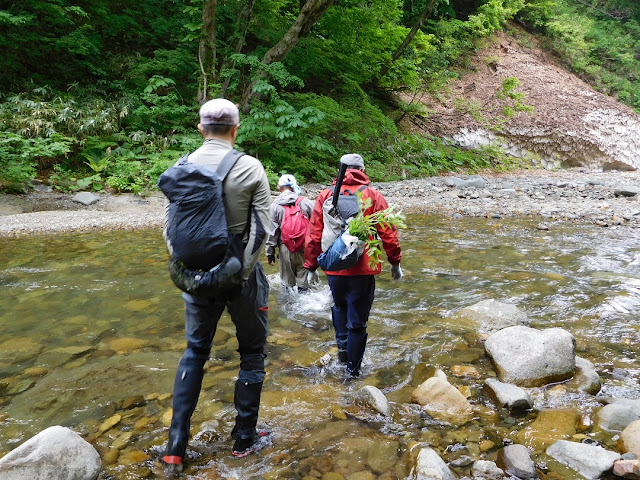 I have fished in Kitanomata-zawa twice. At that time, I parked the car by the stream and went down to the stream only in about 10 minutes by walk. It was main-stream of Kitanomata-zawa and for about 2 km from there to up-stream was the core part for fishing for one day anglers. As we went up-stream for about 3 km from the entering point, the river was divided into 2 streams, Kuwaki-zawa and Karamatsu-zawa with equal amounts of water. Both of those streams were good steady streams where we could enjoy nice fishing. If you want to fish both streams in one trip, you must stay in the stream for 2 nights or more. So, this time, we came to Kitanomata-zawa with a plan to stay for two nights in the stream and try to fish in both streams. However, according to the weather forecast, it would have been raining since the evening of the first day. 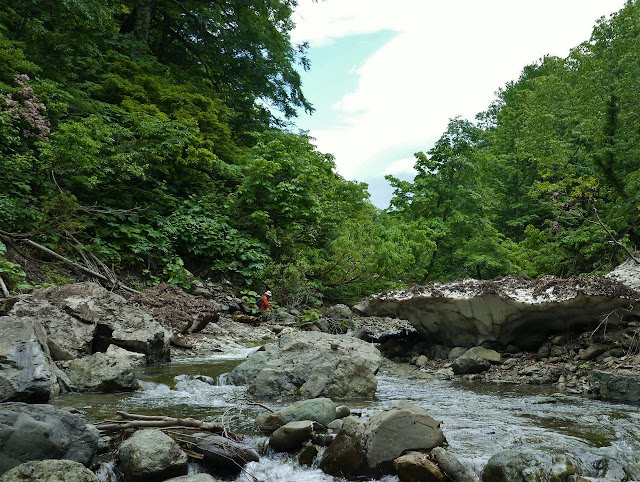 By the way, the village where there are Kitanomata-zawa and upper part of Naruse-dawa is called Higashi-Naruse, and it is said to have become the setting of the famous manga "Tsurikichi Sanpei". I think quite a few of Tenkara fishers living in foreign countries know "Sampei". “Sampei” is a story in which the boy Sampei, who lives in the countryside of Akita Prefecture, who loves fishing, challenges many types of fishing at various parts of Japan with his grandfather who is a traditional bamboo fishing rod builder and Gyoshin Ayukawa who is a professional angler. From the middle of the story, Sanpei also goes abroad to try fishing. Since this manga was also broadcasted around the world as a television animation program, I think that there are quite a few people who know "Sampei". I think that the story was not only merely depicting the fun of fishing, but also a masterpiece depicting the importance of nature conservation, human conscience, and the good old days of the Japanese countryside that Japanese people today are forgetting.

The author, Takao Yaguchi, was born in the nearby Masuda town, and seemed to have set the stage of “Sampei” in this area of Akita's typical mountain village, natural rich mountains, and beautiful rural scenery. I do not know if it is true or false, but this Kitanomata-zawa is a stream that became a model of the “Yonaki-dani (Night Cry Stream)” that Sampei struggles with the Monster Iwana in "Yonaki-dani no Kaibutsu (Monster of Night Cry Stream)" which is popular story in the early edition of “Tsurikichi Sanpei”. 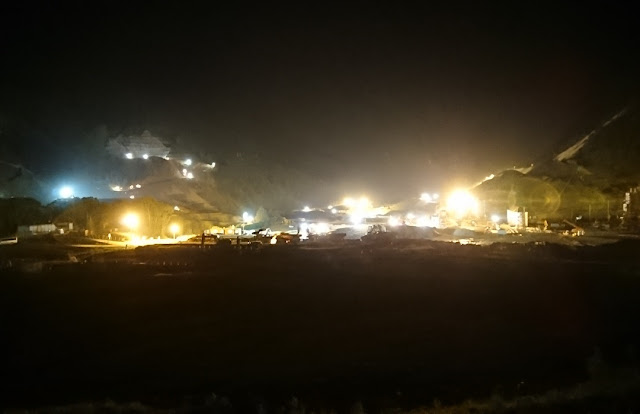 Back to our trip, we drove on a motorway for about 3 hours, then another 1hour by narrow and winding mountain road, we entered Akita prefecture after crossing the pass near Mt. Kurikoma at midnight. As we turned one blind corner, a giant construction site in the whole valley illuminated like daytime brightness with hundreds of searchlights suddenly appeared in front of our eyes. There were innumerable heavy machineries, trucks, and people working like daytime. It was a huge dam construction site that began about 3 years ago. I heard that this dam construction plan had been for decades, and there had been a conflict between pros and cons for a long time, but the construction was finally started. But what a scene. I only think that it is just destroying nature desperately through the days and nights for making money. We stopped the car at a parking lot overlooking the scene and gazed at our breath.

The history of dam construction in Japan is said to be about 120 years. In the past, huge dams were built in various places to meet Japan's electricity demand. There are approximately 63,600 rivers flowing in Japan, and by now, in those rivers, approximately 3,090 dams with a height of more than 15 m, approximately 90,000 sand control dams, and a large number of small-scale dams are constructed. I do not think that all those dams were wrong. Certainly, there were times when dam power generation was needed in Japan. The problem is that politicians and large construction companies flocked to the construction of huge money moving dams, and countless unnecessary dams and sand control dams were built upstream of every river. Besides, in the history of dam construction, many mountain villages and precious nature sank into the bottom of the dam.

The negative effects of dams are not limited around dams. The adverse effects on ecosystems across the river are immeasurable, and their impact has been found to extend to the sea. For example, Mito, where I live, is relatively close to the sea, and we have been having problem since long time ago that the sand of this sea coast has been lost.

About 10 kilometers east of my town, a sandy beach called Kashima-nada (Kashima Coast) continues about 50 kilometers to the south along the Pacific Ocean. When I was a small child, there was a beautiful green pine forests spread along the coast. When I went along a white sand path in the forest, the forest was over, and the sand fence made of bamboo was lined up for many miles. When I ran up the white sand dunes, the white sands that were even whiter than the sand of the dunes spread to the beach. The contrast of this white sandy beach and blue sea and the blue sky were so impressive. It was the original scenery of the coast of Japan, old people were saying "Hakusa seishou(white sands and green pine forests)".

Now, Pine forests have been cut down in many places and have become a residential site, and such a large and beautiful sandy beach has been washed away in most places. Now in those beaches, concrete breakwaters and unsightly tetrapods (wave-dissipating concrete block) are just lined up.

"The loss of the beach is due to changes in the sea current," says politicians and scholars pandering to the government. And they line up the tetrapods, build the levees and make money again. Even elementary school students know. From the mountain stream to the middle stream, large rocks are crushed in the current and became small stones. From middle stream to lower reaches those small stones are washed and became sands and supplied to the sea. So, if you stop the river with dams or sand control dams, enough sands will not flow into the sea. Everyone would have learned about this in the science class. 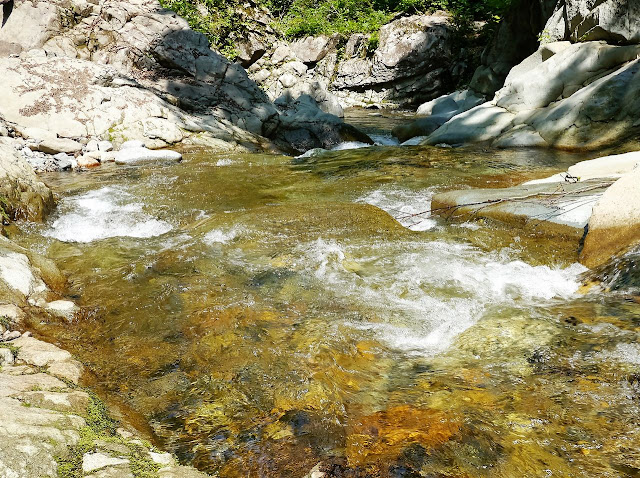 120 years of dam construction has ruined Japan's beautiful coast. I think that we should make an effort to recover the lost scenery, even if it takes next 300 years.

Well, we left the dam construction site that continued to work even in the morning, we entered Kitanomata-zawa from the upstream of the site. This year, there was less snow during the winter, but there were unexpected snowfalls in March and April, and there were more snow bridges left in the valley than usual. The water in the stream was still very cold, but the energetic Iwana were actively chasing our kebari. Although it was little raining, we were able to enjoy fishing in main-stream of Kitanomata-zawa and get into the target stream of “Kuwaki-zawa”. At “Kuwaki-zawa”, Iwanana's response was even better, and I caught some good size Iwana over 30 cm. 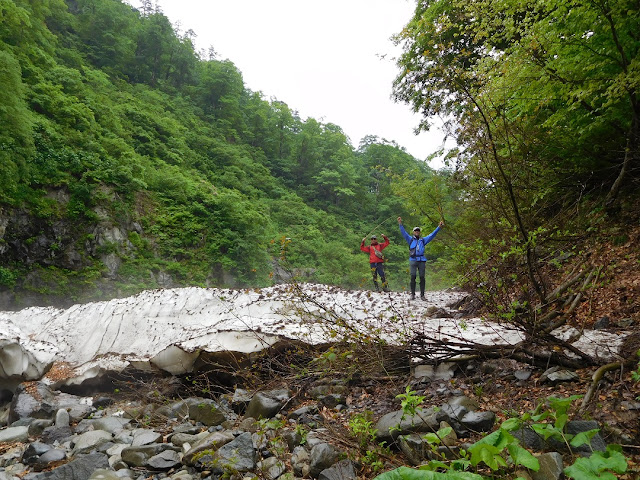 Actually, we were planning to stay for two nights in the upper part of main-stream and fish 2 streams of “Kuwaki-zawa” and “Karamatsu-zawa” up to Sakana-dome (Fish stop waterfall), but according to the weather forecast, it would be raining from the evening till the night of next day. Perhaps it would be difficult to do fishing next day. Depending on rain, it may be difficult to return to the car parking spot. We took lunch in Kuwaki-zawa and decided to get down. We also planned to rent a cottage at a nearby campsite and enjoy dinner and drink. We picked up Udo and Aiko (wild vegetables) well on the way back. I looked forward to the tempura of wild vegetables at the dinner. 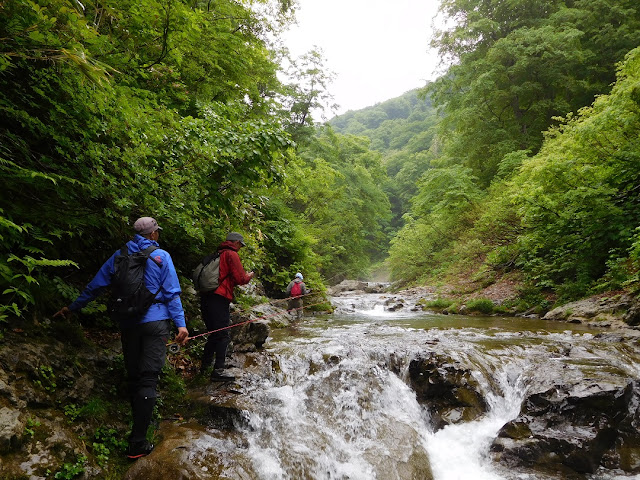 There was a signboard of the information about the dam construction in the parking lot where we had parked the car. A friend who was reading it said, "It's only five years until the dam is completed and the water is fully stored." Furthermore, according to the information, when the dam is flooded, it is said that “Kitanomata-zawa” will be drunk into dam lake to a point just before the junction point of “Kuwaki-zawa”. The area that is good for fishing in the mainstream of “Kitanomata-zawa” will be disappeared. Also, if a dam is created, it will not be possible to walk along the river, so it will not be easy to enter the upstream.

It will be five years until the mountain stream of "Tsurikichi Sanpei" disappears to the bottom of the dam. "I want to come here once more to stay in Kitanomata-zawa and fish up to sakanadome" said one of my friends.