Far and away Miomote River

Our last genryu fishing trip this year was planned to Main stream of Miomote River. Miomote River is a river that I planned an expedition together with Sebata-san in the same period three years ago. Unfortunately, the expedition was canceled at that time due to various circumstances, so the trip that was canceled had been caught somewhere in my heart.

Miomote River flows through the center of the Asahi Mountains (Mountain region spreading between Niigata Prefecture and Yamagata prefecture 60km south and north, 30km east and west. the mountain region has rich virgin forest of hardwoods such as Beech and Mizunara.) to The Sea of Japan. The genryu of the Miomote River is still like a big mainstream with a large amount of water, and it has many rugged but beautiful tributaries such as Takeno-sawa and Iwaimata-zawa. The area is a top-rate destination for Japanese keen genryu fishers and sawanobori (Stream climbing) experts. 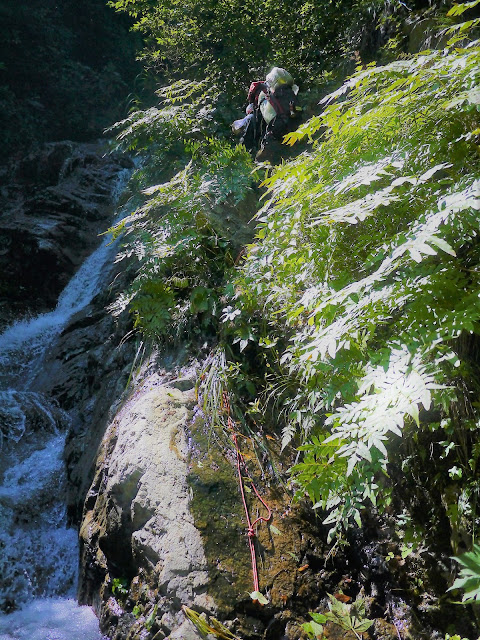 Also, Miomote area is one of Japan's foremost heavy snowfall areas. In the mountain streams, the snow bridges remain until June or even July, and we can not wade and fish due to heavy run-off until then. It is possible to do kebari fishing in July, but from the end of July to the end of August it is impossible to do fishing because plague of blood-sucking horse flies “Mejiro-abu”. The remainder we can fish is only one month in September, that is, the period during which fishing can be done is only about a month and a half. Also, the harsh valley inscribed by the torrent does not let people go enter easily. It comes very difficult to wade even with a slight increase in water due to rain. This is a truly limited river that only several parties of real experts visit a year. So, this great nature protects and nurtures a lot of large iwana in Miomote river.

Asahi mountain area is covered with virgin broadleaf forest such as Beech and Mizunara. Wild animals such as black bear, Japanese serow and birds of prey such as golden eagle and goshawk live in this rich nature. Spring is a wild vegetable, summer is Iwana, autumn is mushrooms, winter is hunting. Since ancient times, people in Miomote village lived their lives with mountain blessings, doing Matagi(Hunters), picking wild vegetables or mushrooms.

Now, Miomote village sank to the bottom of Oku-Miomote dam, and all the villagers moved to towns. There are no village people entering the genryu area of Miomote River for a work. There used be a good zenmai path along Miomote River to the core genryu part, but almost of the path has been disappeared into the bush now, and it is hard to trace it. Since there is a mountaineering path to the main peak of the Asahi Mountain area "Mt. Oh-Asahidake", it is possible to use a steady climbing path to the Miomote Evacuation Hut in the middle part of Miomote River. Also, this evacuation hut will be of great help in the event of a sudden weather change.

Earlier in September, we go on the annual 2 nights for 3 days genryu fishing camp. Tohoku region of the Japan Sea side, it is just time Mejiro abu(Horse flies) just disappeared, there has been no anglers for a while and often good fishing can be done. This year, Tsurumi-san, Ito-san and I planned a trip to Miomote River. The aim was to go to the most upper part of genryu area called “Ito-zawa”. I have asked and heard a lot of information about routing and fishing from Sebata-san. I had heard a lot of information about routing and fishing from Sebata-san. He kindly always talks us the very useful and important information about the rivers to us gladly. I can not find a word of gratitude for him. By the way, the weather was very bad this summer. There were many rainy days, and there were extremely few sunny days like summer. There were also some typhoons generated.

We can go to the 1st tenba (Camp site) of Miomote River without crossing the river using the old foot path along the river in case of bad weather and water level rises. We may be able to escape to the evacuation hut, but once it starts heavy rain, we can not even walk through the river, not to mention fishing. We discussed carefully until 3 days before the departure and decided to make this trip 1 night for 2 days 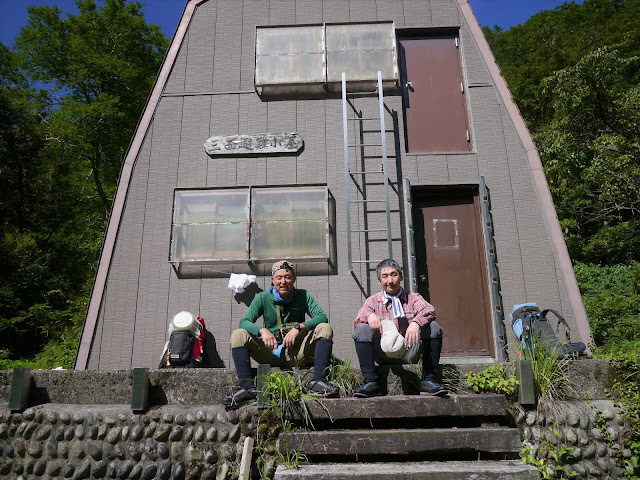 We thought the trip would be an investigation for the next fishing trip. We wanted to check the foot path which are almost faded into the bush, exact location of 1st tenba in the middle part of the mainstream of Miomote River and points we go down to the stream for fishing. As for fishing, we thought it would be OK, if we could do fishing in the middle part of main stream even for a short time.

A night before we enter the mountains, we parked the cars at the parking of climbing gate for Asahi mountains where we parked the cars also in July. There were full of stars in the sky. The weather forecast for the next day was fine for whole the day. We left the parking early next morning. The mountain climbing trail to the Miomote Hut was comfortable. We arrived at the hut in 2 hours and half. When I peeked in the hut, it was used cleanly, and when coming out of heavy rain it would be a comfortable evacuation place for a night.

After a short rest, when we tried to rush into rinse bush that we hear to the rumor, we found there was remarkable stepping trace. We traced the footprints carefully and also found there are pink ribbons of the route mark were hanging. After that, the pink ribbon was hanging exactly to the key points where the route became unclear. Sometimes there is a group to lower the ribbon of landmarks, but this one was a wonderful job. Thanks to the ribbon, we were able to reach the descent point to the mainstream very smoothly. 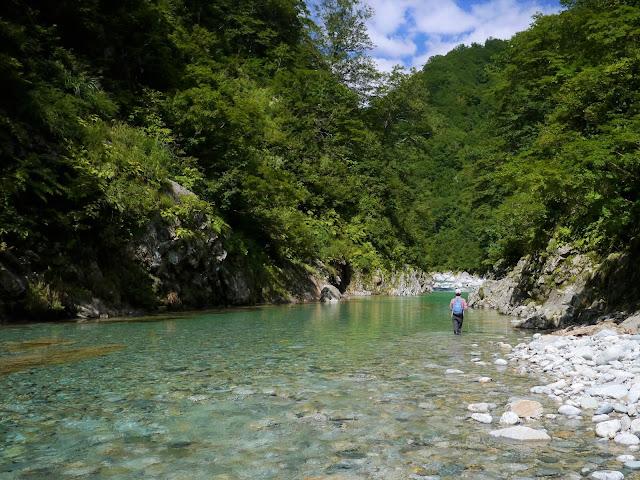 Just in case, we secured it with a rope and got off to mainstream, but we got stuck there. There was a lot of water, and we could not wade through the river at all. Without any help, we climbed the slope and again advanced to the stepping trace of the pink ribbon. The route after that was pretty bad, but we managed to get to the 1st tenba by 13:00.

The time was already past 13:00. We had to make decision here. It was an option of camping here or to fish as much as possible and going back to the hut. The confirming of the route and the tenba which was the object of this time had already been completed, and there was a high possibility that it would be raining next day from the morning. We chose to stay in a less risky shelter hut after a quick talk. We had quick lunch and prepared for fishing. 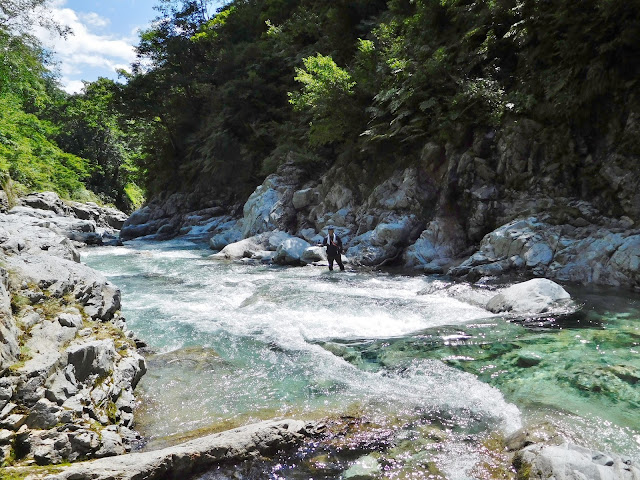 The time we could spare for fishing was only an hour and half. Also, the high water was not good for fishing. As Sebata-san was saying, the Miomote River in that area was a good fishing spot where riffles and goros continued. Under the blue sky of the summer color, the rich forest that continued from the mountains, the river bank of pure white granite polished by the torrent, the beautiful flow of light emerald green color, we stood on the bank of the Miomote river and took our breath. Unfortunately, the water was very clear and beautiful, but current was too strong for fishing. Only Tsurumi-san fished a couple of 28cm class iwana and time was orver when we reached to the big deep pool. 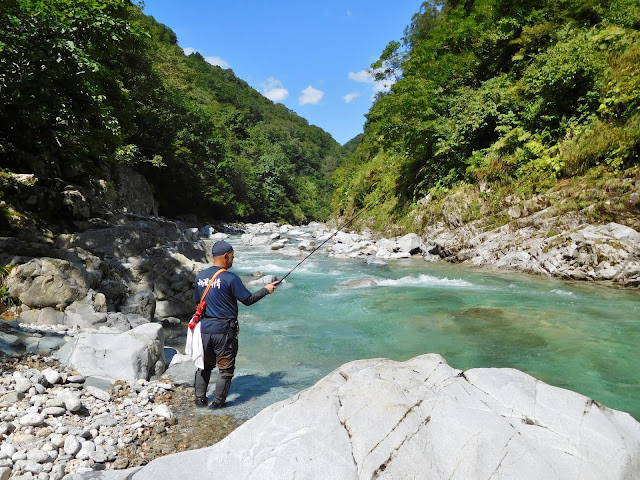