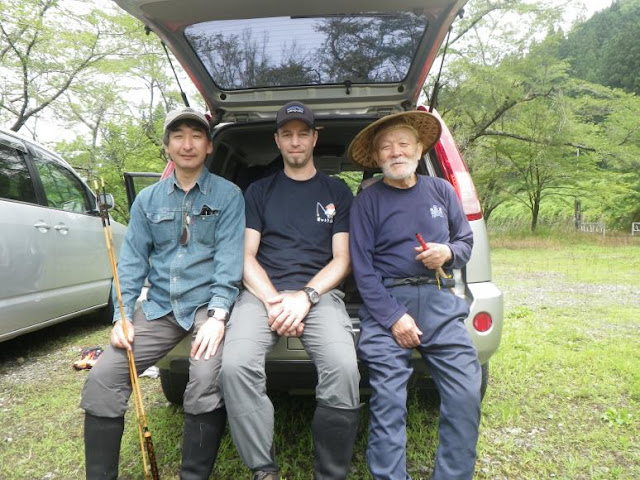 A Friend Comes From France

This early July, Mr. Christophe Laurent, who is famous French Tenkara fisher in Tenkara Fisher, has visited Japan. It was also this site that I got to know him, and I have communicated with him by Facebook or e-mail for about 2 years. He runs a blog about Tenkara Fishing in French and owns a tenkara tackle web-shop for French and European anglers. I feel the extraordinary passion on him for Tenkara Fishing.

It was about the beginning of this year. I heard from him that he was planning to his visit to Japan. I thought he would be very busy during the trip but I wanted to show him a bit of real Genryu fishing and also to create the opportunity of meeting with one of Tenkara legends Yuzo Sebata. So I asked him about the idea of short genryu fishing camp and meeting with Sebata-san, then Crhistope-san agreed to the suggestion with pleasure.

I asked for help to Sebata-san and some of other friends to welcome Christophe-san. Fortunately they were all very happy with the plan, and we made 3 day fishing holidays in Tadami of South Tohoku area. Our plan is 1 night for 2 days of genryu fishing camp and a party with friends at the next night in Tadami village, at the 250 year historic house of local wealthy farmer. The house was also used as checking station to the next country in Edo period and called “Bansho”. (Bansho means a checking station.)

Actually Sebata-san stays at Bansho some month of a year and works as a chef and a caretaker. 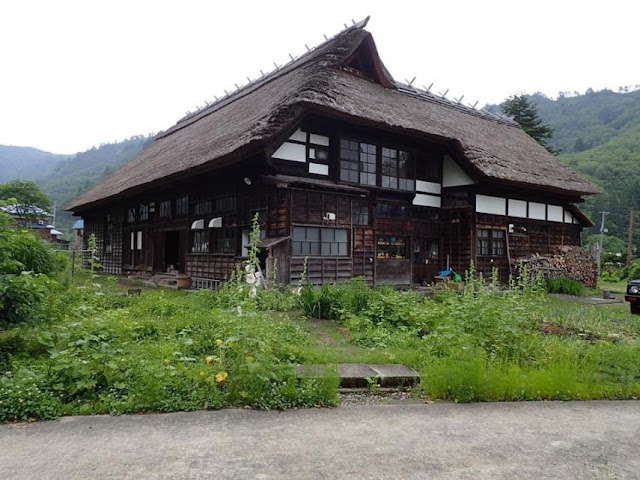 In the evening 02 July, I met Christophe-san in my hometown and we departed for Tadami right away by my car. We were group of 5 people going fishing camp and supposed to gather at Bansho by the early morning July 03, but we wanted to go to Bansho by mid night and have short sleep. Sebata-san was waiting for us when we arrived. So we had little drink and talked about fishing. Friends were arriving one by one and we were awake until 3:00 am.

Last friend arrived at 5:30 am and we woke up. We did packing and changed cloths quickly. We departed for the stream by one car at 6:00 am. It was in rainy season in Japan, but we were quite lucky with the weather. Weather report said it would not rain for about 3 days. Morning mist had hung over the early morning of the mountain village of Tadami and it was like scenery of a monochrome landscape painting.

We drove about 30 minutes from the village to the mid-mountains and arrived at car parking spot. We went down the main-stream and had breakfast at the riverside. The stream we were heading was branch of that main-stream and it was only about 1 km up-stream of the place we were having breakfast.

As we have plenty of time and also the main-stream looked very good for fishing, we decided to start fishing. Christoph-san and 2 friends set the rods and we did wade fishing, but we had no bite of iwana and arrived at the entrance of the branch-stream in about an hour. Then Christophe-san fished his first iwana at the confluence. It was very small iwana but it was his memorial fish.

We waded up-stream fishing but as we were heard from Sebata-san, the lower part of the stream still had damages from the flooding caused by torrential rain hit that region about 3 years ago. There must have been more good points for fishing in the stream but so many gravels filled the riverbed. Still we could catch iwana at the pools of bent and the size of iwana was getting bigger as we went up-stream. The condition of the stream was also getting better. Firstly Christophe-san was asking the right points and drift line of the kebari but soon later he got it right. He cast a kebari in a very good point and the kabari drifted right. Iwana came up and bit the kebari. Hooking right and he got iwana after short fight and smiled. 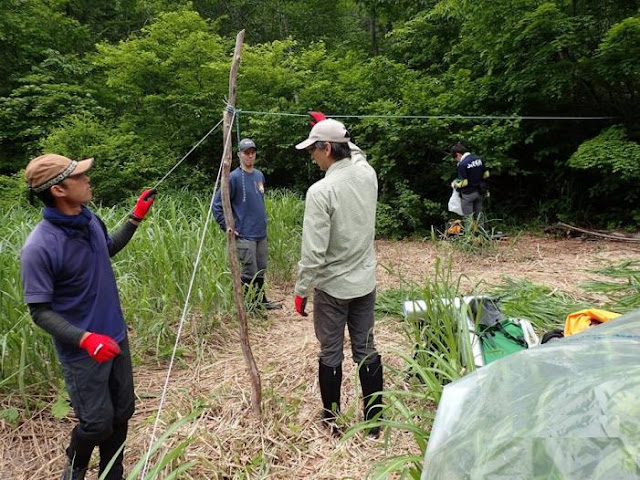 About 10 am, we had reached to the temba (camp site). We split up and leveled the ground, set a tarp and made up the base camp. It was bit earlier but we had lunch by the river. Christophe-san liked onigiri(Rice ball). It is typical Japanese picnic meal and like our soul food. Someone cooked spaghetti with Japanese sauce and it was very good. 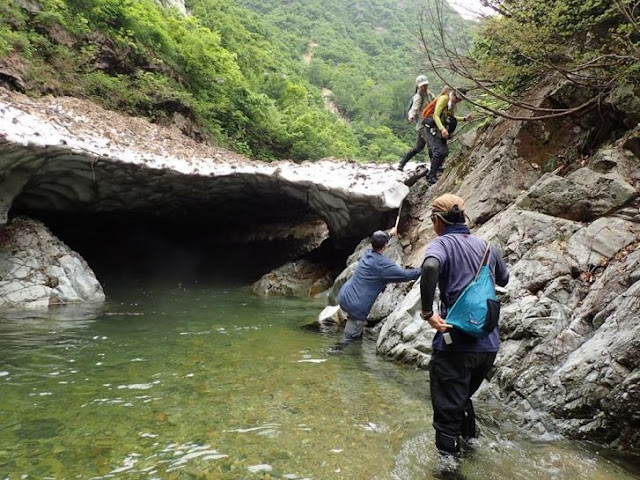 After lunch, we started fishing and waded up-stream from the temba. The stream was much better there. There were many nice fishing points and we could see iwana at every good point. Christophe-san fished enough iwana and we fish one by one. Last winter they had lots of snow in this area and there were still some snow bridges left in the valley. We carefully climbed over the snow bridges. After clearing some snow bridges there was nicest small pool and Christophe-san hooked the biggest iwana there. It looked “Shaku-gami” iwana. With the old unit of length of Japan, 1 shaku is about 31cm and we think over 1 shaku is big mountain stream fish. Christophe-san landed the shaku-gami iwana safely but when we try to take photo the iwana run. Anyway we all were very happy that he fished the best iwana of the day and our voices of the cheers were echoed in the valley. 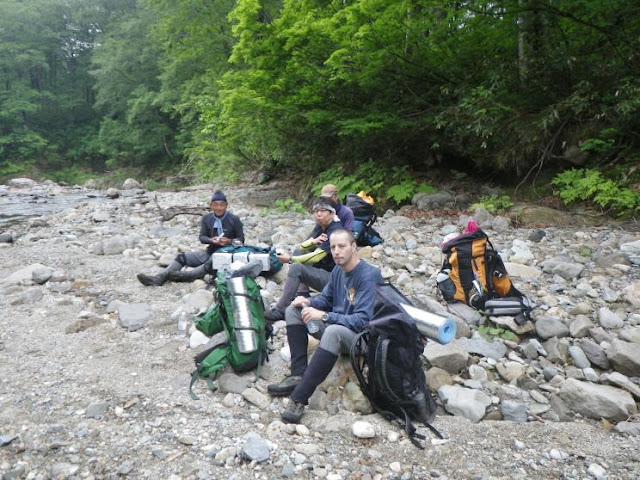 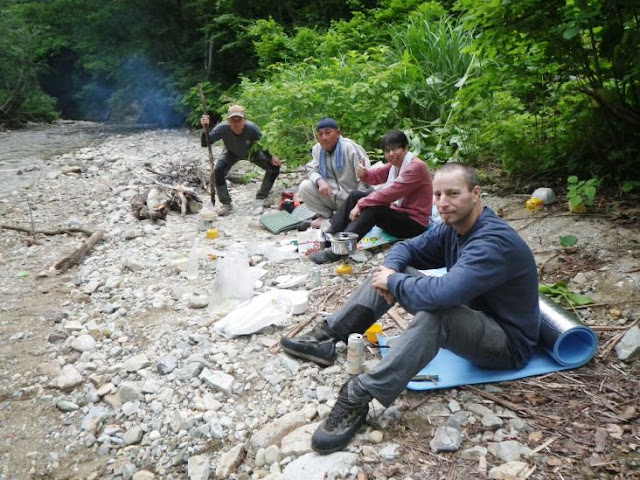 We returned to the temba by the evening. We first gathered firewood and slowly started cooking for dinner. Someone made up the bonfire and we toasted with beer. We cooked Yakitori in the bonfire first and main course was Chanko-nabe (chicken & vegetable stew). When the valley was shrouded in dusk, we were comfortably mellowing with alcohol. We were talking about many things genryu fishing, tenkara fishing, fishing in France, etc. Last menu was ramen with Chanko-nabe soup. We were very full and lying down by the bonfire and talked more.
Next morning, we woke up at the sound of rain hitting the tarp. We were not in the mood of going fishing in the rain. So we cooked steamed rice and had breakfast slowly under the tarp. Before long the rain stopped and we broke the camp. We went down to the main-stream and fished the upper part of the main-stream on that day, but fishing was not as good as the day before. We fished until noon and left for the village of Tadami after lunch. 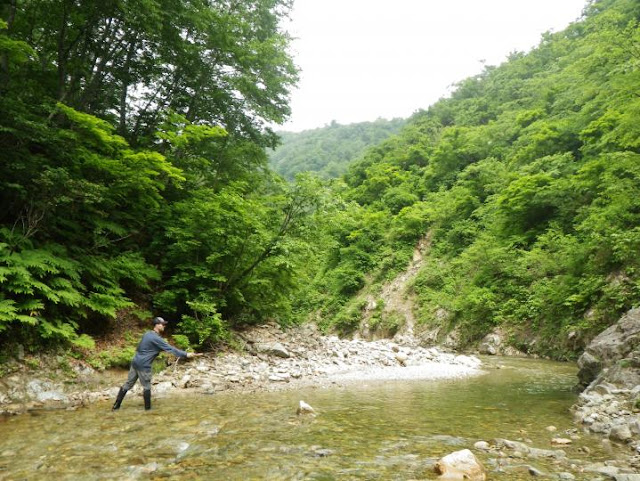 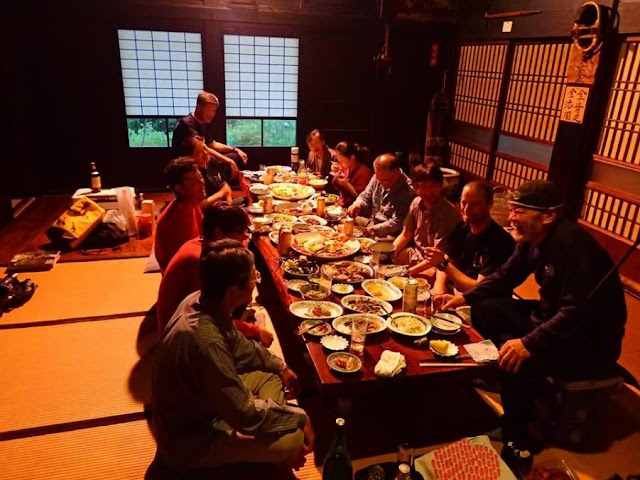 At Bansho, Sebata-san was waiting for us, and other friends were gathering one after another. Actually Sebata-san is a very good chef. That day, he cooked almost of dishes for us. There were so many Japanese dishes, and some of them were very rare countryside cuisines. We enjoyed good Japanese sake and dishes. Sebata-san was unusually drunk and talked with Christophe-san very happily. We were very tired but it was so enjoyable night. We forgot about time and enjoyed drinking and talking until late at night.
On Sunday, we went yamame fishing in the morning as Christophe-san wanted to fish yamame, but Tadami is a mountain village, and we had to drive to lower place for nearly an hour. It was a small stream in a small village. We parked cars and prepared for fishing. Firstly Sebata-san tried at one pool but did not have any bite. He had not been fishing recently because he had bad back ache since last summer, but he showed us his casting on that day. It was just short time but we had something special from it.

Afterwards we went down to the stream and Christophe-san fished 3 small yamame. I told Christophe-san that there were many more beautiful rivers or streams where we could fish yamame, but this small stream fishing is one of our typical yamame fishing. 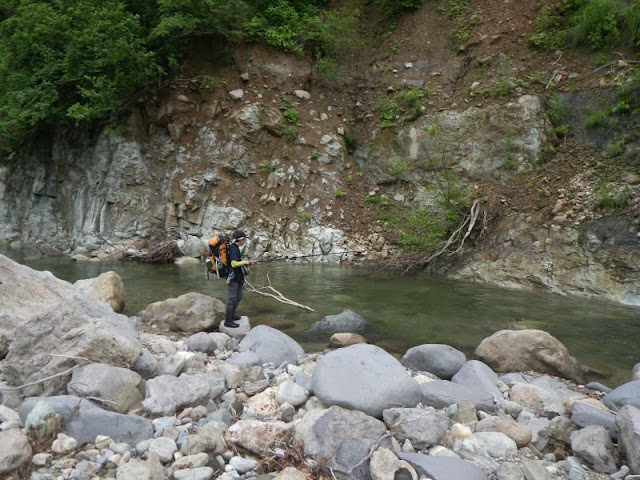 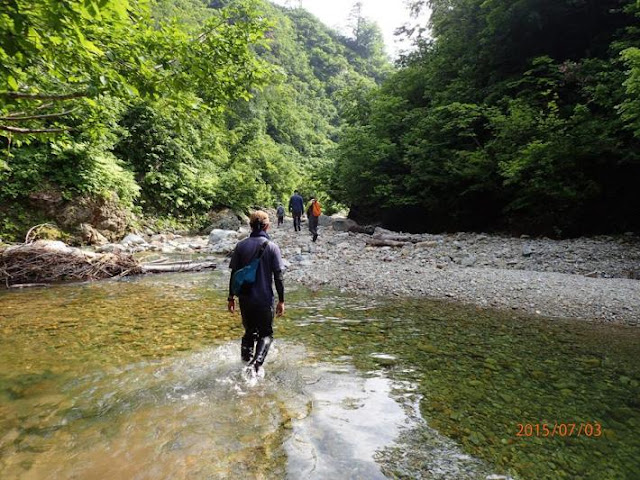 During those 3 days, we were not able to take Christophe-san to deeper in the mountains, to spectacular landscapes valley, to the paradise of iwana, but I think we could show Christophe-san the atmosphere of real genryu fishing in Tohoku mountains, Japanese countryside and its history and yamame fishing in satogawa (village stream). I really hope this fishing holiday with us would be one of very good memories of Christophe-san’s stay in Japan. It is good memory for all of us too. We thank Christophe-san very much for visiting us and spending great time together.