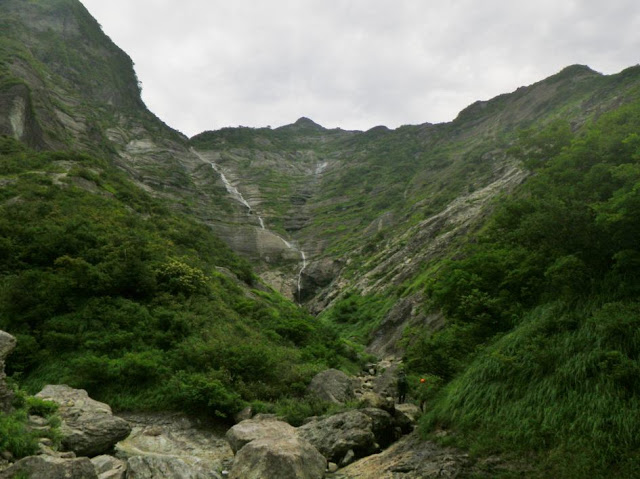 Hidden scenic spot “Gangarashibana”. A friend of mine said “When I first saw the Gangarashibana, I though whether there is such a magnificent place in Japan and my heart was trembling." In the eastern part of Niigata Prefecture, at the center of kawachi-Shimoda mountain massif, there is a river called Haide. if you go very end of the headwater of Haide River, there is a superb view of the valley Gangarashibana. It is the valley surrounded by rugged mountains of slab. They say if you stand on the bottom of the valley and look around, you must feel like a being in a giant mortar. There are 2 large waterfalls flowing down from the peak ridges of 350m high, and char is living up to just below those water falls. It is not the tourist site at all. There are no trails to Gangarashibana. You have to climb over the mountain ridge and walk through the stream. Old local people must have thought it was the field of God. 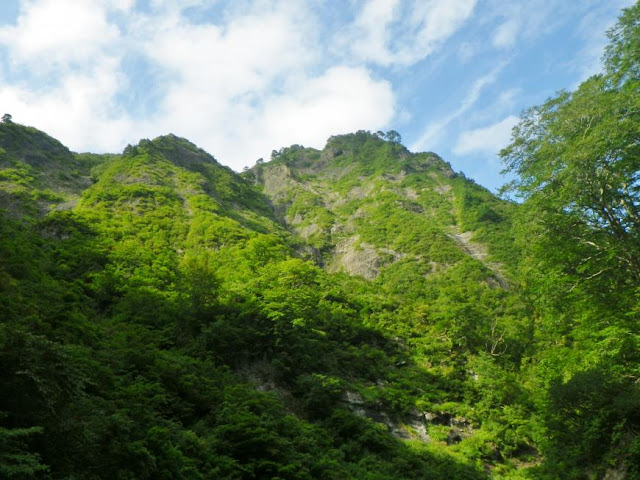 When I just started genryu fishing, I saw a documentary TV program that aims to Gangarashibana while fishing iwana.I thought vaguely that I want to go to the place like Gangarashibana someday in the future. Few years later, I began genryu camp fishing, and I could go to Gnagarashibana any time but never had chance for many years. 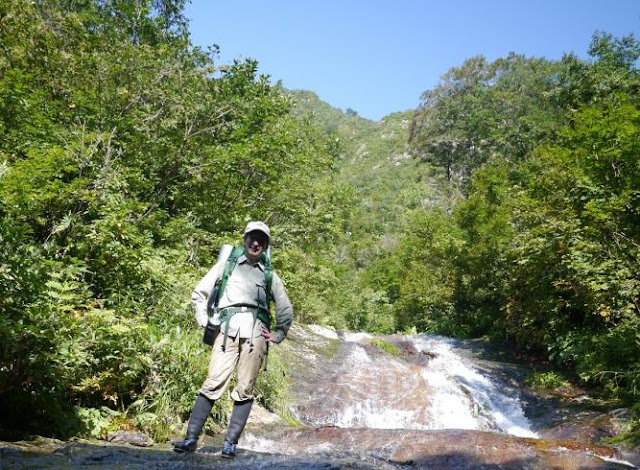 Finally in this September we made the plan to visit Gangarashibana, but 4 or 5 days prior to the departure, some problem occurred, typhoon approaching, heavy rain and cancellation of 2 friends. We could not decide the trip until the last minutes, but still miraculously kawachi-Shimoda mountain massif had escaped from the impact of typhoon and heavy rain, so I decided to go on the fishing trip with a friend of mine. 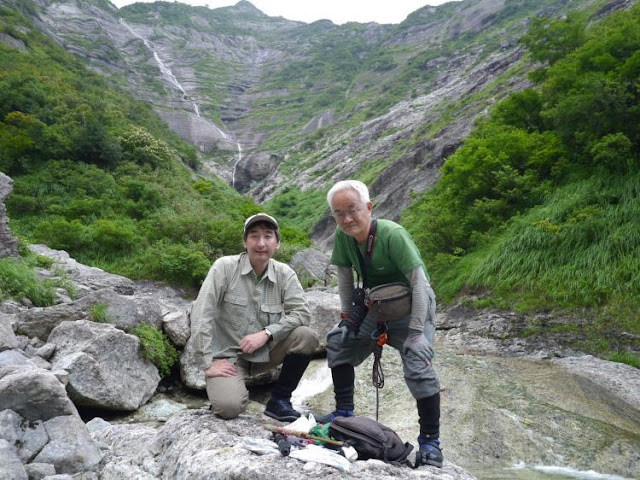 One good thing for us is kawachi-Shimoda mountain massif is not so far from my home town. It is less than 4 hour drive taking general road for half the way. On Friday night after work, I drove my car heading to kawachi-Shimoda, and picked up a friend of mine on the way. We were a bit worried about anticipators because Haide River and Gangarashibana are very popular among fishers and also stream trekkers. We arrived at the car parking spot and fortunately there were nobody. May be people cancelled or postponed their plans due to the bad weather for past several days. We set the tent by the car and toasted with beer. There were full of stars in the sky.

I somehow did not sleep well that night until the morning. Anyway we woke up at 5 am and packed the backpacks. After all other fishers or trekkers did not come. We stepped into the narrow trail along the stream called “Ichinomata-zawa”. This small trail goes to the top of the mountain ridge and goes down to Haide River. As there is no car road along Haide River, we have to climb over one mountain ridge. This small trail along the Ichinomata-zawa is said that Mr. Yuzo Sebata first opened for many years ago. At the top of the ridge this trail meets with another Zenmai-michi (Zenmai trail) that was made and used by local people since long time ago. From about one third of the way to the peak we started to walk through the stream because it looks easier, but soon later there were many water falls appeared and last one was not possible to climb. We looked for the trail and took it sometimes. We needed 3 hours and half to reach the peak. Going down was easy, and we could stand on the Haide River about 11 am.

There was a nice and clean temba (camp site) where we reached Haide river. It was at the confluence of the tributary called Akaba-zawa and the mainstream Imahaide-zawa (This upper part of Haide River is called Imahaide-zawa). We quickly set the tarp and made up the camp and had lunch. We planned the first day to do fishing mainly. The weather was so nice and the stream looked to have a bit higher water than usual. We thought it was very good for fishing. We started to walk up the stream and fished thought the bright rocky stream surrounded by high valley of the slab. Our hunch was hit. After few casts I fished good 27cm iwana. A friend of mine fished same size iwana soon later too. He We had enough of iwana from 27cm to 30cm in about 2 hours and went back to the temba by 4 pm because we had to gather firewood and prepare for the dinner before dark.

When we were arriving at the temba, we saw the smoke of bonfire coming from Akaba-zawa. There were some people camping opposite side of Akaba-zawa. We went there to say hello and talk about our plans for tomorrow. There were 2 ladies and 1 gentleman cooking dinner by bonfire. I said hello and soon noticed the gentleman was very famous climber and fisher Mr. Takakuwa. He writes articles and take photos for Keiryu Magazine (Headwaters Magazine) regularly. As we have common friends we became informal immediately. They were also planning to go to Gangarashibana next day, so we decided to join together.

We went back to our temba and made bonfire. We enjoyed dinner and beer, but we were very tired. Especially I almost did not sleep the night before. I was in asleep by 9 pm.

The next morning, I woke up all clean. A friend of mine was already awake and he said “There are patches of blue sky but mostly cloudy and radio weather forecast said it would be rain in the afternoon.” Soon later Mr. Takakuwa came and said that we should get to Gangarashibana before noon. We agreed. Haide River is very famous for its high-speed of the rising water when it rains because the river is surrounded by slab (only rugged mountains). Rain comes straight into the river and the stream gets swollenness very quickly. 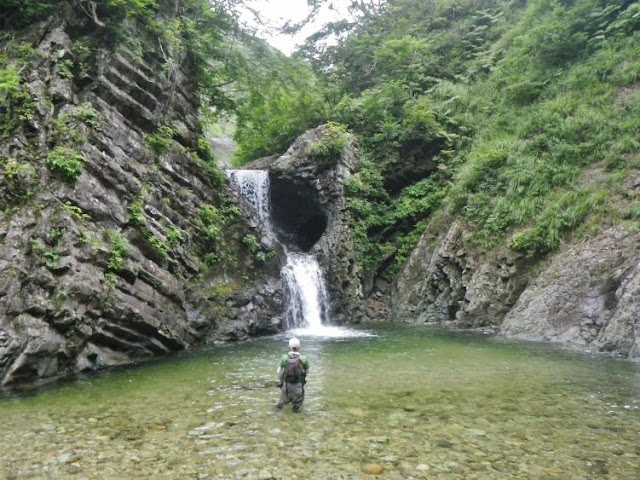 Mr. Takakuwa’s party left for Gangarashibana first. We had breakfast and followed them. Less than 1 hour, we had reached the place where we fished last yesterday and we joined Mr. Takakuwa’s party shortly. The scenery from there was so good and spectacle. There were more rocky mountains appeared. We sometimes did fishing but it seemed like more fish in the downstream and size of iwana was getting smaller. We climbed around 2 big water falls. The water of the stream was becoming less and less as we go upstream. The mountains surrounding the stream of Imahaide-zawa were getting very rocky. We all thought we were nearly there, when there was a great wall like rocky mountain and the very big water fall was hanging from there. We recognized it was the one side of the walls of Gangarashibana and the water fall was the Sakanagaeri-no-Taki (Fish Return Fall). When we clear one corner of the stream, there was the great full view of Gangarashibana rising in front of us. 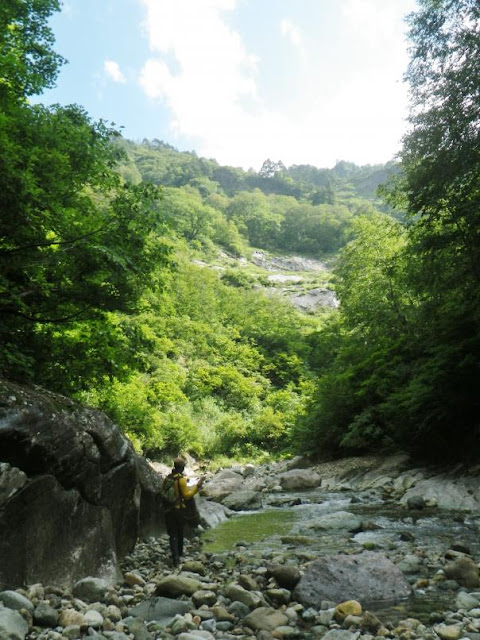 “Gangarashibana”I muttered in my mind. Time stopped then. I lost the ward and was fascinated to its majestic scenery of Gangarashibana. It was looking down us from the cloudy sky. I turned around and realized that we were 360 degree surrounded by slab mountains and yes it was just like being in a giant mortar. The water fall that flows down from the peak of Gangarashibana, Sakanadome-no-Taki, had much more water than it that I had seen in the photos. I really thought that we could not feel this grandeur scale and power of Gangarashibana in the photographs. Coming up here and facing Gangarashibana, I did not care iwana fishing at all. We enjoyed the majestic figure of Gangarashibana to our heart content.

Before long, few raindrops were falling from the sky. Come on, time to go back. If it rains hard, we have to chase with swollenness.

“May be God of Gangarashibana was stopping the rain to show us Gangarashibana.” I was thinking such a thing and walking down the stream with hurried steps. 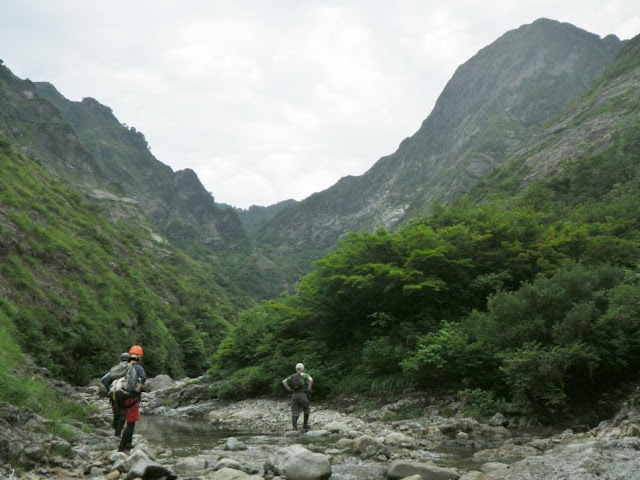